I looked at the gynae’s face and could tell something was wrong. Her brow was knotted, her eyebrows narrowed, she had fallen silent and was no longer chatty. She moved the probe around on my belly some more, and then she spoke:

I nodded I think, I looked up, I tried to keep the tears from coming.

She was as nice as anyone can be under these kinds of circumstances. I heard her say,

“I’m sorry we met under these circumstances. We’ll meet again in happier times.”

She explained to me what my options were. I could either have surgical miscarriage management or wait for everything to come out naturally. I opted for the former. The nurse who took my blood test afterwards affirmed I’d done the right thing.

“I’ve been through the same situation before. You don’t want to have to do it naturally, I wouldn’t go through it again.”

At the time I saw the GP for the scan, I thought I was 11 weeks pregnant. I was feeling optimistic. I only had a week to go before I would be out of the 3-month danger period. That wasn’t true. My baby/foetus/collection of cells in my body measured 9 weeks and 6 days. She had passed over a week previously. There had been signs. Two nights before I had had some light spotting. A web search suggested that, in most early pregnancies, that was a sign of miscarriage; though many women went on to deliver normally. I hoped I was one of the latter. I had also experienced some abdominal pain during my pregnancy. The pain would travel around different parts of my stomach. I thought it was normal. How was I to know what was normal or not?

And even if I knew, what could I have done? You can’t stop a miscarriage when the foetus is that young. All the evidence seems to point out that this is just nature’s way of selecting healthy babies. That doesn’t make it easier to understand or recover emotionally. The doctors have been stressing to me in words such as, “this has no impact on your ability to try again.” But I have no desire to try again. At least not now. People have been saying to me not to make up my mind now which I understand, but for fucks sake, I went through weeks of nausea and exhaustion for what? And even though I tried my very best not to get emotionally involved, I had a name for my little girl. And she was absolutely going to be a girl because I willed it so. And she was going to have both my name and my boyfriend’s name. We had already agreed on that. And she was going to be a little feminist, and we would have had a great relationship. No Alice Walker versus Rebecca Walker drama was going to occur in my relationship with my little girl. And I was going to be an attachment parent, and breastfeed her for a year, and take her to work meetings with me cos what else is the point in doing feminist work if we can’t combine our labor with our care work? But SB was not to be. Good bye SB. Mummy loves you. 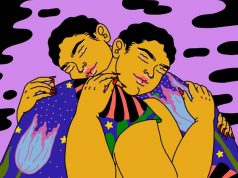