“I don’t want a bionic baby,” said my Mum. Bionic babies are what my Mum and I call test tube babies. We imagine them to be stronger than other babies. – more resilient, bigger, even more intelligent… This was halfway through a whatsapp conversation which had started with me telling my mum, “Guess what, I’ve decided that we are all going to go to Sao Tome for my 40th birthday”. I said this whilst I was still at the Pestana Equador, a resort on an island accessible only by crossing a sea which started off as deceptively calm, getting choppy halfway through the 20 minute journey. Crossing the sea always makes me think of our ancestors who lost their lives on a journey they never wanted to make. Yet it was somewhat easy whilst surrounded by palm trees, white sands, and the deepest of seas to push back the thoughts of the slave trade that kept popping into my consciousness whilst staying on the island of Sao Tome and Principe. Our tour-guide Fernando with a shrug of his shoulders said, “The Portuguese say when they found this island there was no one here.” Then added on. “That is what they say”. According to that account San Tomeans are all descendants of former slaves brought to the volcanic islands off the Gulf of Guinea from countries along the West and Central African coast. In the faces of some, I could see the distinct features of my own people. I felt drawn to the place. I knew it was a place that I would want to return to with family and friends. My 40th birthday would be a perfect occasion. I imagined myself surrounded by my besties, my conglomerate of feminist sisters, my best male buddies, my parents, and siblings. I could see people tossing down shots, others lounging by the pool, my parents going on walks…I hadn’t seen a baby in that picture but my Mum’s comments brought me back to reality.

“Whilst you’re planning for your 40th don’t forget to plan for your baby. Don’t you want to have the relationship that I have with you?”

“Mum it’s not like I don’t want to have a baby. I just haven’t met anyone I can have the baby with”.

“It will happen if you put your mind to it.”

Well what does one say to a comment like that? I’m generally good at making things happen once I put my mind to it, but I’m not quite sure how to make the baby happen by force before my 40th birthday. It’s not like I haven’t tried. I asked one of my close male friends a few years ago if he would have a baby with me and he said no. I want to have the whole white picket fence and wife package was what he said, or something along those lines. I asked my lover around the same period if he would have a baby with me and he said he wasn’t ready for a child, but a few years later had a child with someone else. When I confronted him about that recently he said, “I thought you weren’t serious. You only mentioned it once I think. You never brought it up again. I can’t even remember that conversation properly.” [Insert exhale of breath here] I was very serious on the day I asked him. I had probably changed my mind the following week but on that specific day I had been serious. Granted, the issue of a child has never been one of my life’s priorities. I was never one of those children who would make believe feeding her doll, or carrying it around on her back. And during my short marriage my then husband and I never tried to fall pregnant. What I have always been sure of though is that I would like to adopt one day. One day for me is always far into the future, a day that I cannot yet grab with both hands but one that I know will surely come. It makes no sense to me that there are plenty of children in this world who want a loving parent, and plenty of wanna be parents but somehow the two don’t come together often enough. I understand the reasons and the complications though. Whenever the subject of adoption comes up as the resolution for my childlessness my parents stiffen. They tell me stories of their friends who have had terrible adoption experiences. Some people’s adopted children attempted suicide when their genealogy was made known to them. There were those who grew up to resent parents who had raised them. Then there are the people who became perpetually confused, distraught, that they are not who they thought they were. “It’s better to foster” they tell me, than to pretend to raise someone else’s child as your own. “Pay their school fees, give money to their own parents to raise them”. It’s an argument I hear and understand whilst still questioning and searching for my own answers. And then I think of another arguments my friend made:

“Think of it this way. It’s your responsibility to have a child. Think of all the extreme right wing people. They keep having children. Think of all the knowledge you could pass on to your child. They could go on to create a better world.”

Yes it’s a somewhat eugenicist argument but one that struck a chord with me. I had never thought along those lines before. It kinda made sense even though I have no statistics to indicate that liberal and radical folks have less children than conservatives.

But ultimately it’s about my own desire and simultaneous fear. I would love to have with my daughter the same relationship I have with my mother. A relationship filled with love, friendship and disagreement. Knowing that there is this one person to whom I mean everything. Who would protect me with everything she has. Am I leaving it too late to have such a relationship? 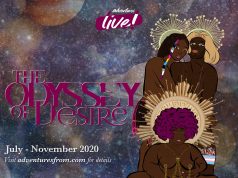 Announcing #AdventuresLive2020: The Odyssey of Desire