*This story is inspired by true events

Ilsa looked up from her cup of rooibos tea as Ryan stormed onto the veranda. He was glaring at his phone, sweating and swearing and sweating yet some more. Ilsa learned over the years that Ryan became easily flustered. It was cute in the beginning of their relationship, but at times like this – when she was enjoying a cup of tea and looking out at the bustling harbor in Cape Town – his flapping was a mild irritation. Ilsa wondered if there would come a day when it became absolutely unbearable.

“Come and sit next to me and enjoy this view,” she said, patting the white deck chair beside hers. “It’ll calm you down.”

Ryan continued to pace. “We won’t be enjoying this view much longer. That bitch Viola just gave away our flat!”

Ilsa shot straight up in her chair. Ryan handed her the phone.

“Read it for yourself!”

….two weeks to vacate…termination of month-to-month lease….as stated in your signed contract…

Ilsa’s brown eyes became Frisbees. “Can she do this?”

“I don’t know, but two weeks isn’t enough to find out how to fight this.”

Now Ryan dropped into the chair beside hers, deflated. His tantrum was over, but completed warranted Ilsa felt. Now she was up and pacing.

“I just thought Viola would have the decency to give us a 30 day notice at least. I mean, we’ve been so accommodating!”

“That BITCH!” the couple yelled in unison.

Ilsa reclaimed her seat and continued to watch the ships docking and mooring. Seagulls screamed overhead, flocking wherever they had the mind to. Once, on a jaunt down by the coast, Ilsa saw water being pumped from a commercial liners bilge. The process fascinated her…all that pent up ocean water in the bottom of what looked like a buoyant city. It was the perfect metaphor. She knew how they were going to exact their revenge.

“Come on Ryan. We’re going to take a shower.”

She took his hand and hoisted him from his seat. What she was about to propose was not going to stymie their potential homelessness in two weeks, but it would certainly make her feel better. And Ryan was sure to be down.

“We’re going to take a shower,” she repeated. “Here. Let me undress you.”

Ryan rolled his eyes. He knew that he could be immature and often exhibited helplessness – as Ilsa so frequently liked to remind him – but he was still a man that was capable of taking off his own clothes. He swatted her hand away.

“I can do it myself,” he muttered. He began to fumble with his belt, making tinkling noises as the buckle tapped against the rivets in his jeans. The sound signaled her boyfriends impending nudity and Ilsa was immediately turned on. She stepped back and let Ryan undress himself until his was glorious and nude before her, save for his boxer shorts. A wide grin spread across her face, her thoughts morphing from the business of sinister revenge to something far sweeter.

“Why exactly are we going to take a shower at midday,” Ryan asked, snapping her from her lecherous thoughts.

Ryan recoiled at the proposal. He looked at Ilsa’s face for signs of insincerity. He found none. She was completely serious. To do something so…so wicked! Ilsa was so sweet and rational. This was so unlike her.

His balls hiked and hardened. Without further provocation, he felt his dick turn to rock.

Ilsa let her gaze drop from Ryan’s eyes to the space beneath that divine V beneath his belly button. Just as she thought, he was down.

The couple gave each other a hi-five and raced to the bathroom, Ilsa shedding the sweater and tights she was wearing to protect herself from the chill of the coldest South African winter in 6 years. Ryan ‘helped’ her along the way, dragging her to the floor, sliding off her socks and craftily making his way to her soft, wet core with his fingers, then lips, then tongue.

The first time he’d eaten her pussy, Ilsa hadn’t expected much from this wiry, pale man with shaggy brown hair who’d asked if she’d be kind enough to reach to the bottom shelf for a can of peaches at Spar.

She liked the kindness in his voice. He liked the way her ass looked when she bent down to help him out. Kismet took their conversation at the check out counter to the checkered sheets of the backpackers lodge where Ryan was staying, where he pussy whispered her into a convulsive climax.

They’d be loving and fucking and figuring out life together ever since.

She was close. Ryan smiled from his position between her legs. Her Nutella nipples had risen like the peaks of the majestic South African mountains he’d long fallen in love with. He reached for them, thumping them gently…then aggressively…sucking on Ilsa’s labia, then clitoris, lapping up the wells pouring from her, darting his tongue in and out of her asshole because it shocked her every time and it pleased him to see her lose her mind – lose that much control.

Stunned, his tongue locked in place. Damn that woman! But she was right. They had a job to do.

Ilsa staggered to her feet, breathless. Together, they found their way to the gleaming white sanctuary Ilsa had fallen in love with when Viola began showing them flats for rent a year ago. She was overcome with emotion. God, she loved this bathroom. It was enormous and filled with her soaps and pretty little towels. No one was allowed to use it: not Ryan, not guests, not ever her mother when she came to visit. What she was about to do was going to hurt, but it was the only way she knew to strike back.

Warm, gentle water gushed out of the shower’s head and drenched she and her lover. In a trance she fell to her knees and swallowed Ryan whole, gliding her tongue against his engorged shaft, wrapping her fist around the base of his dick, applying pressure, pulling, persuading and pleasuring him with the work of her lips.

Isla released him and placed her hands on the tiled shower floor. Ryan slammed into her from behind, thrusting his hips and slapping his balls against her soft, brown ass; his howls muffled by the sound of water hitting glass and tile.

“Remember when you called me your sweet peach? Remember all the nights of making up and making out in this flat? Remember the first time I did this?”

Ilsa did a kegel, compressing Ryan’s long, chubby cock deep inside her. He gasped, grabbing her waist for support.

There it was. The sound of agony she’d been waiting for. In three swift moves Ilsa disengaged herself from his grasp, turned off the water and grabbed his slick penis by the shaft.

He exploded all over the shower walls, the floor, the double paned glass…

Spent, Ryan staggered from the place he’d just blessed with his seed and sat on the edge of the tub, toweling himself off, dazed. Ilsa sat by him, inspecting their handiwork. Then they kissed each other, deeply and passionately – mingling the scents of vagina, ass and municipal water. Ryan wrapped her naked body in her arms.

“Do you reckon we could do that again?”

Ilsa sat and thought for a moment, nodding silently. “Yeah. I think we should do it in your bathroom on the morning we move out. Yeah. I think that’s doable.”

….And this, Adventurers, is why you must clean your own bathroom when you move into a new home. Never trust chance. Never trust a maid service. Trust ME on this. 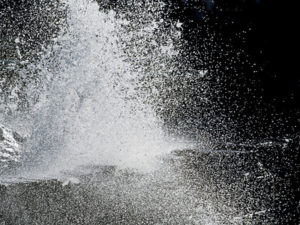