“I can’t feel anything when I put one on.”

“I never go root if I dey don rubber!”

“A man’s seed belongs in a woman.”

“What’s the matter? Don’t you trust me?”

These are common objections thrown out whenever to topic of condom use comes to bear before or in the throes of sex. With the advances made in the design and function of prophylactics (I mean, ribbed for her pleasure…HELLO!), protests to condom use should be nominal at best. And yet it still remains a barrier (if you’ll pardon the pun) to achieving complete agency in the bedroom.

This statement is not true for all women, but anecdotally it connects broadly enough: “Pleasure begins in the mind.” When women feel safe, secure and confident in the circumstances under which they are having sex, they are more able to have better sex. Preoccupations with potential unwanted pregnancy, contracting disease, or even the ick factor of being squirted into can dampen the mood between the sheets. There are many reasons that only 25% of women achieve an orgasm during sex, and I submit that feelings of worry, guilt and fear play a strong role in contributing to that abysmal number.

Committing to protecting oneself – and one’s partner, by extension – is perhaps the greatest demonstration of care and consideration one can demonstrate during the act of lovemaking.

Admittedly, there is no small amount of shame associated with the purchase and presence of condoms in a handbag, wallet or bedside drawer. The implication of being in possession of contraception is that one is “loose”, rather than sexually liberated. Rather than risk the perception of (man) whore, far too many people indulge in risky behavior that can have long-term consequences. It would be disingenuous of me not to acknowledge the societal pressure that many woman and men face to maintain the appearance of piety, however it is my responsibility to add my voice to the chorus that shouts faux piety never saved anyone from herpes.

*If you’re new to using condoms, here are some tips:

There are many myriad contraceptive options available on the market. Indulge in some retail therapy and discover which ones work best for you and your partner. Now say it with me: Safe sex is the best sex! 😉 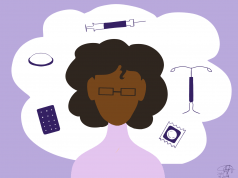