Home Lesbian Her by Jessica Mandanda 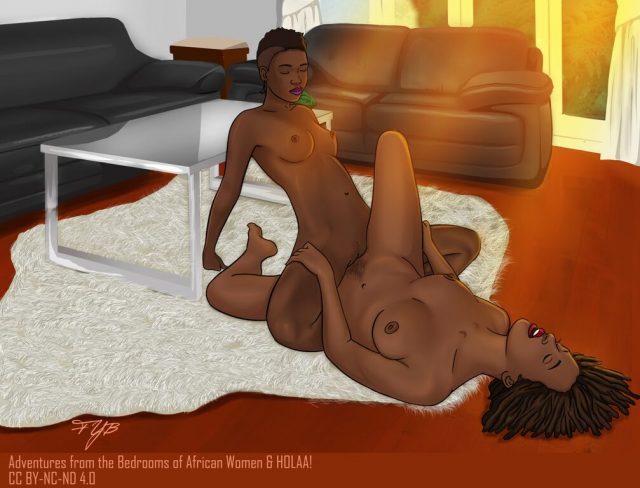 There is no manual for ‘‘Girl-On-Girl’’ sex. No written literature for beginners, I say beginners with intentional caution. There is always a deep camouflaged understanding in nearly every queer person in the pit of your stomach directly linked to the part of the brain that’s in charge of sexual arousal, emotional, mental and intellectual attraction that just constantly tells you how badly you’d rather be with another woman.

No one ever sat me down to discuss the birds and the bees, the sensual nature of bodies and the diverse array of buttons that erupt magic when you touch, kiss, flick, lick and suck while gently tugging, I was completely clueless on this subject matter.

Now there’s much to dissect from my early sexual experiences with women, but there’s too much to untangle there but I’ll talk about one.

Nathi, the girl who affirmed my Queerness. She wasn’t apologetic about her sexuality from a young age. She had been with men earlier but quickly realized she was not attracted to men and did not spend much time debating this, she accepted it and moved on.

I had met her on multiple occasions, mostly at invite-only type of parties that I would never be invited for but I was seeing a guy at the time whose crew organized such parties.  What drew me to her was her hair, see I have a particularly strong attraction to dreadlocks specifically on women, not men.

I liked the way she laughed, earthy and deep from the gut type of laugh and she would smile at me with such ease it sent heat waves throughout my whole body and I would blush each and every time she did. Then she would come by my side, put her hand on my shoulder and slowly caress her way down my back and then hug me, brightly smiling and say, ‘‘Hey Jess.’’

Each time this guy I was seeing would in the nature of many millennial male people text me and tell me to dress up cause he’s coming to pick me up, which usually meant he’d pick me up, we’d aimlessly banter in the car, buy alcohol and head to that weekend’s location for the party, drink, laugh and dance and then have sex, a long, sweaty jackhammering session that would go on for about an hour and half with him hammering while I lay there faking multiple volumes of moans I thought to be sexy moans and inwardly will him to hurry the fuck up and cum so I could go home and sleep.

But there was a highlight to this incessant routine, she was there almost every time and that for me was something to look forward to. I longed to see her smile and laugh, that hug would be my point of climax without her having to actually touch me but I never went further into imagining her kiss me, touch me, undress me and worship my body with the delicacy of her fingers -she had really soft hands- and her tongue spreading whispers of warmth and content throughout my body.

She called me one day and asked to meet, my response was far too quick even though I figured she would be my ride to the party that weekend. In my usual routine, I put on a simple dress, one that could easily slip off and went with a plain jane vibe, which was my norm and she picked me up exactly when she said she would, exciting for me because no one generally showed up on time and we drove to her house.

I had been there just the one time briefly because we had to pick her up but never been inside her apartment. I assumed she opened up her home for our usual weekend bouts of banter and enthusiasm love for alcohol.

She parked her car and opened my door for me and I stepped out, how gentle-humanly of her to do so, I am confused as to why none of the usual cars is here and there’s no sign of the other people here but she interrupted my thoughts with a kiss, rough as she pushed me against her car but soft on my lips holding me swiftly in place with her hands.

We walked into her apartment and I noticed she had already set up some glasses and some wine on her table, but I paid no mind to her thoughtfulness because at that moment my mind had deep dived into the holes of all things her body.

She pulled me to her room and stripped the rest of her clothes and sat on her bed just in her Calvin Klein two-piece sports bra-brief combo and told me to strip. I was excited, I had never done that for anyone, I’d only ever been vigorously stripped. She directed me by telling me which piece of my very nicely assembled ensemble to strip off, slowly, she wanted to look at me, every part of me.

And so I let my dress slide off my body onto the floor, unhooked my bra and slowly slipped off my panties intently watching her bite her lips and pull me closer to her and lined my stomach with little butterfly kisses leading herself to what had now become flood central of my body.

I wanted to touch her so badly but I was more desperate to feel her tongue on my skin. She moved me to lay me on her bed and pinned me down, kissing me and grinding into me and I reached for her bra and pulled it off. Gosh her breasts were magnificent, not perky but perky and her nipples were hardened which made me smile, I had her.

She was in control, how she pinned me down and tortured me with the little kisses trailing from my neck, and centred her tongues focus on my nipples, her hands caressing my body inciting multiple explosions with each touch and each flick of her tongue.

She was gentle and very dominating with her hands as she parted my legs and trailed her kisses downward, kissing very delicately my most sensitive parts, brushing her tongue and blowing over my clitoris.

She liked to tease clearly because she grazed over my clitoris and moved on to my thighs, butterfly kisses and tiny bites as she watched me breathe or rather trying to catch my breath because of my desperation, I couldn’t take it anymore and I wanted to taste her, as measure to calm myself down I guess because I was near my tipping point towards what I suspect was going to be a numbing orgasm so it was quite the relief when she made her way back to my lips and kissed me because then I could return the favour and so I flipped her over.

Naked as we were, staring at each other in her brightly lit room, another first for me, sex was always in the dark with the others but not her, she loved to see everything, it turned her on she said and in a way, the freedom of naked bodies in the light turned me on too.

I kissed her as she spread her legs wide for me, still in her briefs, I wanted to taste her, not her lips which remained soft all the while, not her magnificent breasts but her core, I was desperate to taste her so I moved to slide them off and bit my lip when I saw how wet she was.

‘‘I want to taste you…’’ I told her and felt her breathing change as I licked and sucked my way down to that sweet spot I had been craving. I took my time just looking at her semi-shaven vagina, hearing her breathe and deep-dived, kissing her from just below her belly, slowly down and finally focused my energy on that one spot.

They say for one to achieve the great skill of eating pussy one must spell out the alphabet on the clitoris, a hard thing to do when most cannot even locate the clitoris, I prefer to savor the Vagina, explore it and tease the clitoris, feel her breathing change with each stroke of the tongue and relish in her moaning when you’ve teased her enough and you want her to release and so you lick, flick and suck on the clitoris until her moans become inaudible words and her legs convulse uncontrollably.

I was lost, completely, nothing existed beyond our bodies, no sound existed beyond our moans, no one existed beyond me and her and we built until we both could not hold on any longer and let go. Letting our bodies feel every pulse of our orgasmic climax. I felt the walls fall, all the months of longing finally satisfied and a new desperation for more of her growing in me.

She asked me if I wanted to stay or if I wanted to go meet the guys, and I laughed as it finally occurred to me that she was actually simply meant to pick me up and take me to the party. She looked at me with an anticipation and what I interpreted as her will for me to stay so we could explore our bodies further. ‘‘I’d rather stay, if that’s alright.’’ She gave me that sly relieved smile and kissed me and we got lost in each other bodies.

Often times I am asked how exactly I have sex with another woman, a curiosity most have purely based on the ridiculous imposition that there must be penetration specifically by a heterosexual man’s penis for a sexual act to be legitimized as sex; and nearly every time I am reminded of Nathi, our relationship may have been brief but each bit was fulfilling and freeing and taught me how to never explain how exactly ‘‘Girl-On-Girl’’ sex happens.