There are all kinds of stories online about sex and relationships. Trust me, I know. There is also some rhythm in the journey between ‘darting eyes and knowing glances’ to ‘gasps and moans’. That, I am finding out.

I had been fueling my curiosity with lots of content on women’s sexual experiences – good, bad, great, risky, freaky, hilarious, all of it. Turns out there was more to know about the female cycle, contraception and general stuff about female sexuality. I think it would be a whole lot cooler if generally, there was a more pragmatic approach to sexuality.  You know, instead of making female bodies vectors upon which culture is engraved. It will be great to just let women be the authors of their own culture. I think that the more freedom we have, the more choices are available to people. The lesser the freedom, the faster hypocrisy will eat away at the heart of our society.

Hell yeah, I wanted to have sex already. I was pretty excited about what I would find. I started watching videos and reading stories about what losing virginity was like. Okay…how painful or not, what to do, what to know, don’t have expectations, expect blood. It’s okay if there is no blood? Okay. My partner and I talked about it and just a little while after, in the middle of a really enjoyable make out session, I told him fingering just made me want more. I am pretty sure I did not communicate this with coherent words but yeah, he got it just fine. He asked me if I was ready, I said yeah. He got the condoms and we began.

At first, it just wouldn’t go in. It was like tapping a closed door and I started to wonder if it was ever going to happen. Then, progress was painful – a stabbing kind of pain. I was saying something about nature not making any sense and asking why the first time couldn’t just be as easy as a first kiss all along. I was lying down with my legs spread and slightly raised. It was easier for him to get in if I lifted my legs higher but that also meant I would feel the pain more so I hesitated a lot. He’d kiss me back and forth, we held our hands, took breaks, all of that. Made it seem like team work.  After what seemed like forever, I bled. It was a little blood and I bet that came out when he got in properly. Or as he put it, ‘broke down the walls.’

It took a while before it got in fully but when it did, we were actually having sex. I remember confirming a lot of times. It felt like pleasure wrapped up in discomfort; the ratio of pleasure being lower than the discomfort at the beginning. I was sore and a lot was going on in my head. ‘’Ouuu…Look at me having sex.’’  Somehow, I was surprised that I actually liked what was going on. There was a lot of kissing and fondling and he kept going down and that made it relaxing.

Later that evening, I actually giggled wondering why I wasn’t limping because that’s how Nollywood mothers find out their daughters have had sex. I did a full vajayjay inspection just to see what was going on down there. I was just fine; a little swelling in the vajayjay and recurring flashes of all that happened during the day in my head. Besides that, I was a-okay. Sex after that was less painful than the first and it kept getting better. There are styles, toys and games I want to try and I will…oh I will. And I might just tell you all about it. Wink wink!

On this Mountain I Will Build My Rock 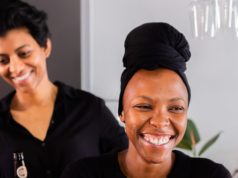 A Gathering of Lovers & Friends