The Meaning Behind The Concept Art for Adventures Live! 21 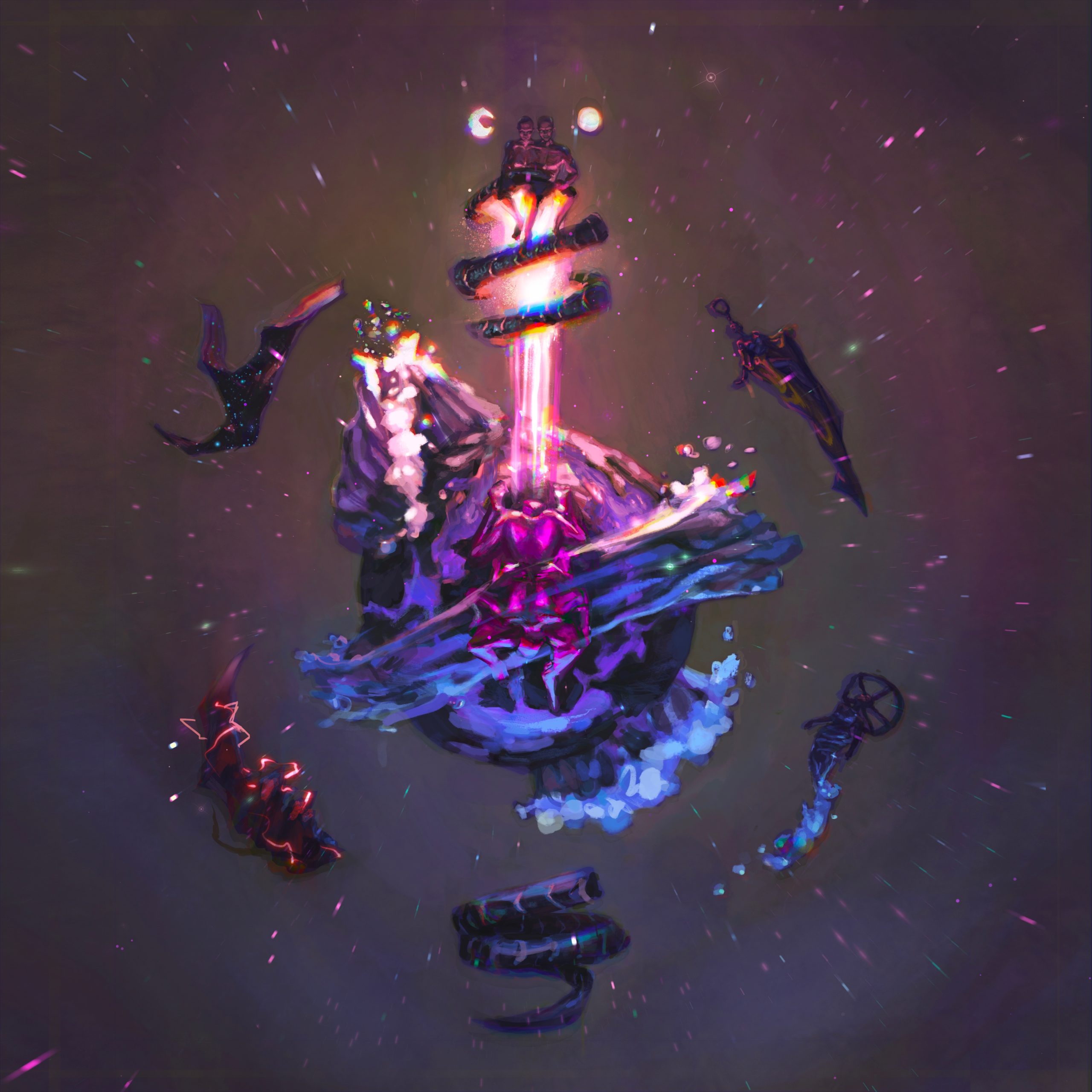 Drawing from the general Adventures 2021 concept note, which serves as a brilliant backdrop for this, I wanted to hone in on the idea of a Transformation Cosmos. The cover art sought to create a world of sensual and sexual experience so magnificent, that it will feel life-changing. It will be ethereal, it will be magical, it will feel transcendent.

Two pointers from the concept note have greatly influenced the idea for the cover art – Bodies as Power, and Sensual Pleasure & Spirituality as Power. In view of this, I did a bit of research into how various African cultures have viewed sensual pleasure, gender, sexuality and its relation to spirituality. I was especially drawn to how queerness was represented within this context. Of the many things I found, the Dagara people of Burkina Faso and the Fon of Benin and larger Ewe mythology pulled me in the most.

For the Dagara people:

In a September 1993 interview, writer Malidoma Some, who hails from the Dagara tribe stated, “At least among the Dagara people, gender has very little to do with anatomy. It is purely energetic…”

From the Fon of Dahomey (Benin) and wider Ewe mythology, I took an interest in the dual/androgynous creator-deity, Mawu-Lisa, their story of creation and how the earth is held up.

‘Mawu-Lisa was a complex and androgynous deity of whom the deities Mawu (who was female) and Lisa (who was male) were two aspects. Mawu-Lisa symbolized opposing aspects of human life. MawuLisa is described as one person with two faces. One face—the face of Mawu—is that of a woman whose eyes are the Moon. The other face—the face of Lisa—is that of a man whose eyes are the Sun. The aspect called Mawu directed the night.

Fon cosmology envisages the earth as floating on water, the source of rain and the springs beneath the surface of the ground. Above the earth circle the heavenly bodies on the inner surface of a gourd. Serpentine power, personified as Da, son of the divine pair, assists in the ordering of this cosmos. A serpent, he has a dual nature rather than a female-male identity. When he appears in the rainbow ‘the male is the red portion, the female the blue’. Above the earth Da has 3,500 coils, xasa-xasa, and the same number below: together they support Mawu-Lisa’s creation. A way of describing this cosmic interrelationship would be to say that Mawu-Lisa is thought and Da is action. Other vodu (deities) of course are assigned parts in the government of the world: the sky is under the charge of androgynous Heyvoso, ‘thunder’ the earth owes allegiance to the dual deity Sakpata, whose dreadful weapon is smallpox; the sea and the waters are the domain of Agbe-Naete, twins of the opposite sex; and to Age is given the barren wastes.’

Another source describes how the Fon see the worlds held up:

The universe is a sphere divided in two, one half fitting on top of the other. They join at the horizon. The earth is on the plane that separates the two halves, the top half of which is the sky. This sphere is encased in a larger sphere, with water between them, the smaller sphere floating in the larger one. The rains and the sea come from these waters.

Inspired by the Fon people’s belief in what the world is, we created a ‘swirly’ globe, replicating some of how they believe the world to be held up – water floating around it, the snake-god Ido Hwedo around it keeping it afloat, etc.

This world has amorphous figures within it, in a sexual position, in a 69. These figures are agender/genderless/gender-bending. They represent the concept of Gatekeepers, and there is  a visual energy connection between the sex they are having, and a point on the globe that is a portal or gateway, that these figures have opened up through sex.

At this gateway, we see the androgynous creator-deity Mawu-Lisa, and the energy ‘beam’ reaching them.

We placed bodies and ethereal forms in smaller sizes all around the globe, representing ancestors, the gods and spirits. Some of the vodu (deities) from Ewe mythology and culture can be represented, as well as others from Egyptian mythology, East, Central and Southern Africa etc. It will be done artfully, so as not to seem like there is too much going on. The items to signify which gods are who will be few/subtle. The idea is to create a flowy, swirly, ethereal image.

The energy from the amorphous beings can also create high vibrational points (which is something the Dagaara believe in) in the rest of the globe, which connect very subtly to the other ethereal beings placed seamlessly around the globe.

Kamalu, C. (1998). Person, Divinity & Nature: A modern view of the person and the cosmos in African thought. London: Karnak House

*** The cover art for Adventure Live! 2021 is designed by MxBadger.

Sex and Beyond: Exploring Sex & Sexuality for Trans Women