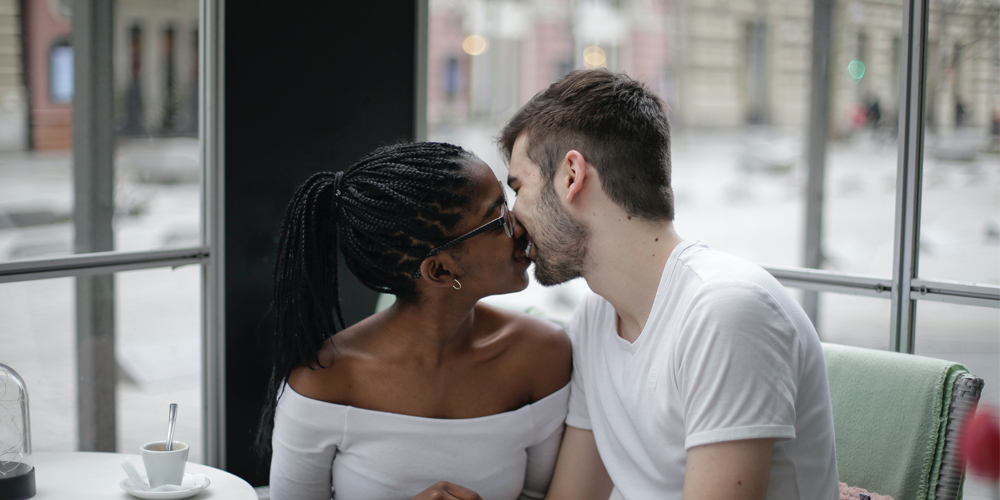 The keys were barely in the door before Wes and I were tearing the clothes off each other. “Welcome to Abbylissima,” I said before he claimed my mouth again.

“Abysmal?” Wes held both sides of my shirt and yanked. Buttons flew everywhere.

“This is not Hollywood,” I said.

“What do you serve here? I’m hungry after those drinks.”

“What’s on the menu? Can I order a starter of your sweet ass?”

“You’re on the menu.” I grabbed his hair, his clothes, his waist. My hands were moving seconds before my brain kicked in. “God, I love your hair. Shut up,” I said when he opened his mouth wider than was required to kiss me. I felt him chuckle against my throat. My bag dropped to the floor. Wes kicked the door shut, cutting off the hallway lights.

“Errr…we should probably turn the lights on. I don’t want to bump into anything, man. I have balls.”

“Yes, please,” Wes said, reaching towards the sound of my voice. I was silhouetted against the lights coming from the behind the curtain and dropped down on the floor. “Where are you?”

“Here,” I said, unbuckling his belt. “Take off your shoes – socks too. I hate it when men are down to their underwear and they still have socks on.”

“God!” I jumped in the direction of the sofa after I touched him. We blinked as I switched on the lamp. “ I’m sorry, I just had to see that. What is that? Are you half-black or something?”

Wes smiled. He started to reply when music blasted from a car driving by on the street. Wes executed some dance moves, running his hands over his stomach. He undid the buttons at his neck. The car drove past trailing its sound into the distance.

“Wait,” I reached for the remote on the nesting stools. “ OK, do that again. You’re not bad.”

“Splash Waterfalls. It’s by Ludacris.” I laughed when Wes slipped off his belt and held it above his head. He folded it and smacked himself with it.

“Ouch, let’s not do that,” he said flinging it away.

Wes popped the next button, then another and another until he undid the last one. He took off his cufflinks and threw them in the direction of the majority of the buttons from my ruined blouse. His waist moved like a spool of thread unfolding. He undid the button on his trousers, lingering over the zipper.

“Why are you stopping? Go on.”

Wes, unzipped himself halfway down, letting his trousers hang off his hips. He nodded. “Show me yours.”

“I got the taxi. Work it, woman.” Wes crossed his arms. “I’ve got all night.” He looked down at himself. “Ok, I haven’t got all night. I’m going to explode.”

I stood up and turned him around until he was by the sofa. I pushed him down. “Yes, do that,” Wes said. “You have good taste in music. Let’s get in on in public,” he sang along as the music changed.

“We sort of started already on the train,” I took off what was left of my blouse and tossed it.

“We should probably finish then,” said Wes, biting his lip.

“How so?” I took off my belt and unzipped my skirt.

Wes stood and walked over to the window that covered three-quarters of the wall facing the street. He drew them apart and crossed his arms, raising an eyebrow.

“I see.” I walked to the window. Putting my ankles together, I started to peel my skirt off. I didn’t take my eyes off Wes. The material encircled my feet. I kicked it towards him.

“Please leave those heels on,” he said.

“I was going to. You’re taller than I am.” I turned around and wiggled in his face like a Dance Hall queen. I spread my legs and went down low, swinging and locking my hips from side to side. I put a leg up on my loveseat, flexing backwards. I played with my panties, looping a thumb in the sides as he had his trousers. “I used to dance in my village as a child,” I said, shaking my shoulders. My breasts jiggled.

“Screw this shit,” Wes said. He dived. In that one motion, my panties were around my ankles. I stepped out of them. Wes straightened them out and held them to his face, inhaling. The front of his trousers filled out. When he took his hands away, his eyes gleamed. It was like looking into a rainbow; the greys and the greens and even the ring of brown in the centre standing out against his face.

“I am in trouble, am I not?” I said. I slipped the straps of my bra off, standing with my hand on my hips.

“Yes,” he said. Wes put his hands around my waist and lifted me. “Wrap your legs round me.” I did as he asked, placing my arms on his biceps. Wes growled as he kissed me. I ran my hands through his hair, loving the feel of it running through my fingers, like water. His forehead beaded with sweat. Wes put me down on the loveseat and twisted off the hooks of my bra with one hand. He continued kissing me, driving me on with his tongue. I parried with mine. He kissed down my neck to my chest nibbling at the skin on the tops of my breasts. I arched, offering them to him. He continued licking and nibbling on the skin on top, ignoring my nipples.

“Stop it.” He looked me up and down quickly. I opened my mouth and left it open.

“Wes,” I whispered. I took my legs from around his waist and spread them, pointing my heels in the air. “Look at me.” Wes shook his head, keeping his eyes on mine. A vein throbbed in his neck. “Look at me, Wes. Look at how wet I am.” I dipped a finger and coated his lips. His nose flared as he inhaled. Wes looked down.

“Oh God,” he clawed at his trousers. I helped him. He kicked them off, standing in a pair of boxer-briefs. I swallowed.

“So, you are wearing underwear. Seriously, are you even a little black?”

“Italian ancestry,” he grabbed my waist, moulding me to him and turned us over. Wes slid down until I straddled his chest. “Move,” he eyes followed the progress of my pubis as I came closer to his mouth. When it was directly above his face, he opened his mouth wide and latched on.

“Mmmmmmm. Move a little to the left.” Wes was already obeying, following the movement of my hips. I ground down on his face and he gave me more tongue. He squeezed my bum cheeks together, running his hands all over them. He smacked them together causing the reverberations in my clit. “Mmmmm, mmmmmm, yes, that’s it.” I tugged on my nipples. “Mmmmm….Wes, I’m coming….mmmm.” He re-doubled his efforts. The ‘slurp, slurp’ sounds he was making lodged in my brain. Wes grazed my clit with his teeth as he clapped my buttocks together and I came, tossing my head back. “Don’t stop, more, more,” I said, still shaking from the orgasm.

“More? What do you want?” His face was covered in my juices. I bent down and started licking at his face, lingering on his lips and the tip of his nose. His erection jerked and jumped at my entrance.

“It looks like your body knows what to do.”

“I’ve change my mind about your taste in music,” he said. “This guy is shit.”

“It’s for tempo. Work to it,” I said. Wes positioned me on the loveseat, facing the window that provided an audience to anyone caring to look up to my fourth floor flat. “Do you think anyone is watching?”

I reached into the drawer built into the frame of the seat and pulled out a packet. I tore it open and sucked the sheath into my mouth, anchoring the circle to my lips. Slowly as not to cause him to erupt, I slid the condom on top of his shaft. Wes hissed. He turned me to face the window again, as he put the condom in place. I planted hands down on the seat beside my knees as he worked on me; slipping first the tip then a little more each time. I made circular motions with my waist to ease him in.

“You have a black fetish.”

“I am,” I pushed back against him.

“Witch,” Wes growled. He gripped me and thrust, slowly. “Oh God this feels so good.”

“Oh thank God.” He jack hammered it, slapping his balls against my behind. I felt him hold his breath. “Oh shit. Oh shit. Oh shit, this is good.” His words were ragged.

“Deeper, deeper. I want to feel you in my throat.”

“Yes, com’on,” I reached between my legs stroking my reawakened desire. Wes exploded. He slammed into my buttocks gripping me, his chest wet with sweat. He lay with me slightly on top and slightly to the side, finishing me up with his hand and knee, playing with my behind.

“You know, I don’t even know your name,” he said afterwards, playing with my braids.

“Which way to your room?” I pointed and he walked me to it. I burrowed under the duvets, smiling.

“If you kill me, they will find your pubes and track you down,” I said. Wes laughed, kissing my forehead.

“I’ll tell them you killed me first,” he said. “Go to sleep now,” he lay down on top of the covers beside me.

By morning, he was gone. A note written on the back of the taxi receipt read:  “Damn.”

Has your teacher hit on you before?

How to eat dick: The ‘open-to-trying’ guy

‘Stations of My Hymen’s Loss’ by Guest Contributor Eleanor T.K.

12 comments On Sexy Times with Nnenna Marcia: Dinner is served