LSD: A Kraken on the Loose 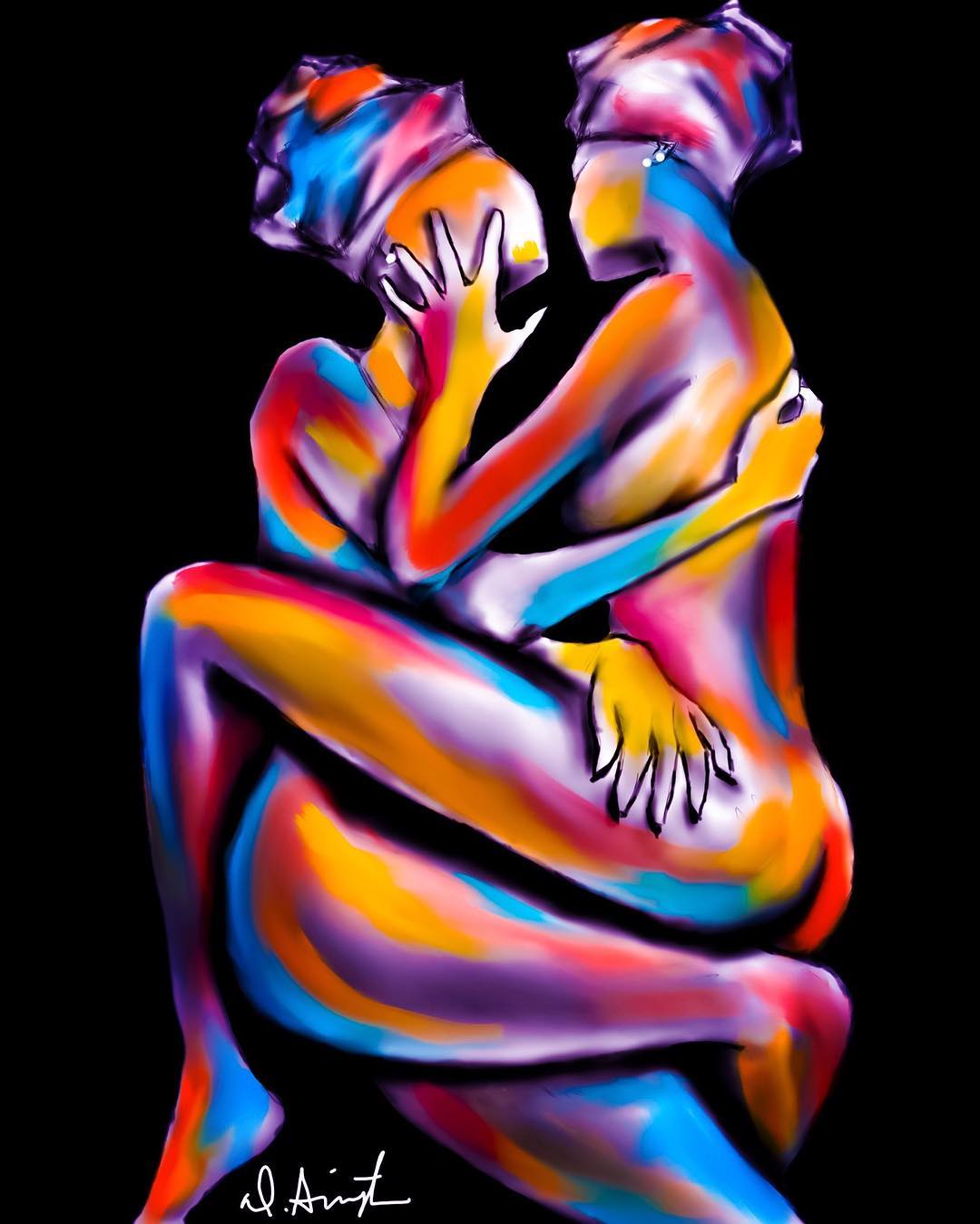 The phone rang at ten o’clock that morning just as it had for the last two days. Khalid was calling again; and he would call again at four that afternoon and finally at nine at night. In between there would be an occasional text requesting Lerato to call him back, asking if everything was okay, begging her to tell him what was wrong. Lerato ignored all of his communications. She had to in order to maintain her resolve to stay committed to Paul.

But that doesn’t mean she wasn’t tempted. She couldn’t deny that she ached to hear the sound of Khalid’s voice, or craved the touch of his skin which always carried the faint scent of some chemical in the paper mill that he managed. He and Paul were different in every conceivable way. There was no comparing them physically. Paul was dark as a cool stroll at midnight and Khalid as bright as a beach day.  Paul touched her in a cerebral way that Khalid had not yet managed, but Khalid Haddad had consumed her soul. She almost dared to stop her phone’s shrill ring tone and breathlessly tell Kal how much she’d missed him, but Paul would be back any minute.

“Who was that calling?” his voice said from the door way.

Lerato jumped in her seat. How long had he been standing there?

Her fiancé was drenched in sweat, his white t-shirt sticking to every nuance of his ripped body. He grabbed a towel from the bathroom and blotted his face.

“It was good. Ran eight miles today. Who was that on the phone?”

“I don’t know,” Lerato mumbled. “Some chick keeps calling. I told her yesterday that it was the wrong number.”

Paul grunted and quickly shed his clothes, leaving them in a heap by the bathroom door. This was Paul’s only vice, and Lerato’s biggest pet peeve. She detested picking up his dirty clothes.

“You’ll join me,” he said, heading towards the shower.

Lerato instinctively began to stand up to undress and then paused. She looked at her husband to be standing there in all his naked, black glory. He looked like an onyx god. Taut ass cheeks that curved perfectly underneath; pectoral muscles that were adorned with small nipples that were blacker still; that ‘V’ in the front that was the gateway to a shaft that was on the verge on a full blown erection. Heaven he was magnificent to look at… but she couldn’t be governed by her lusts right now. She shook her head and scooped up his sweaty clothes, holding them defensively in front of her.

“I’ve already washed up this morning. Besides, we have to keep on schedule. You’re coming with me today, right?”

“Did you think I forgot? Are you implying that I’m absentedminded?”

“No, Paul. It’s just that this assignment is very important to me, that’s all. I want to honor my professional commitments.”

Paul slogged off and muttered at Lerato through a mouth covered with frothy toothpaste.

She was surprised by how much Paul’s dismissal of her passion stung her. It had never bothered her before, not to this degree at least. She took Paul’s clothes and put them in the laundry bag for the housekeepers to cart away later without another word.

Felix Darko was sitting in his office trying to look important. He paced around his office, straightening picture frames and inspecting for dust. He finally sat, and picked up a newspaper, absent mindedly thumbing through its leaves. He realized that this might make him look less industriously occupied and got up to shift through his file cabinets. A custodian knocked timidly at the door and poked his head in.

“Yes, yes! Send them in!” Felix said hurriedly. He grabbed a file and planted himself in his executive chair.

His anxiety had little to do with Lerato and everything to do with who was accompanying her. Paul Tumbo was a big shot at the Global Consortium, and Felix Darko had tried in vain to get the organization to invest some “small money” into his orphanage. Three years of applying for a grant from the group had turned up nothing but one rejection letter after another. Now he had a manager from that very organization coming into his office? This had to be a gift from God. And to think he almost told the woman who was bringing his deliverance to get out of his office and stop wasting his time.

It was during a chance conversation that he had discovered Lerato’s connection to the Global Consortium.

“What does your husband do anyway? How can you afford to be in the country just reading books to kids and not earning any money?” he’d spat at Lerato one day after story time.

It was then that his answer came. Hei! He would have to be more careful of how he talked to people in the future. His wife had been telling him to mind his tongue for years… who knew the woman had a bit of sense.

Felix cleared his throat and plastered a smile on his face. He looked past Lerato and extended his hand to Paul Tumbo, who rolled in after her like a menacing storm cloud.

“Mr. Tumbo! What a pleasure to meet you!” Felix yelled a little too eagerly.

Felix Darko’s office was over decorated. He had stuffed too much furniture into too small a space. The file cabinet, which contained only a dozen folders or more swallowed up half the room. The desk, an enormous affair constructed of odom wood didn’t make any sense. It was oblong in shape and looked like a dining room table. Dear God. It WAS  a dining room table. Paul had seen enough.

“Shall we get started, Mr. Darko?”

Felix led Paul through the same series of corridors that he had taken Lerato through not too long ago. She left the two men to their tour and to their discussion and made her way to the orphanage’s common hall. She was surprised to see so many of the children sitting and waiting for her. Even more unexpected was their appearance. They had all been bathed, hair combed, and dressed in what appeared to be their best clothes. Felix Darko’s voice echoed in her head.

Lerato shook out the unpleasant thought and addressed the kids.

“We have some new faces, I see!” she beamed.

“Yes. Daddy Felix said we must all sit in your reading group today whether we like it or not,” said one of the older girls Lerato had seen milling about the concrete yard in days past.

The dirty look that one of the warders gave her did not go unnoticed.

“Well, let’s get started, shall we?” Lerato said, letting out a quiet breath. She scanned the crowded room of 40 children for Araba and found her crouched behind a side table. She motioned for her to come closer and put her on her lap.

“Why does Araba get to sit there?” said a little boy angrily. He looked demonic, with jaundiced eyes and a head covered with untreated ringworms. Lerato felt her skin turn to gooseflesh just looking at him.

“Because she’s the smallest,” Lerato said limply. How could she even begin to explain her affinity for Araba to this impudent little boy? She inspected him more closely. No. He wasn’t impudent. He was just hurt. No one wanted him, did they?

The children nodded eagerly and moved in closer. She pulled a large, colorful book from her leather handbag and held it up.

“This is the story of the tortoise and the hare,” she began.

The children gasped as a green tortoise popped out of the book and stared silently at them. Lerato had taken for granted that they would be familiar with something as banal as a pop-up book. The depravity of their situation sunk in with her at that moment. She read with gusto.

“Once upon a time, there was a sloooow tortoise and a very quick hare…”

“I don’t know what you’re expecting the Global Consortium to do about this situation, Mr. Darko. It’s obvious that you have run this operation abysmally.”

“No. Really. Look at this water leak. How long has this been going on? How much water do you waste on an hourly basis? Judging from the amount of mold and algae growing in this area, I’d say the water leak has been present for a few years, at least.”

“How much money do you suppose that is down the drain – literally? Problems like these are all over your facility. I’m sorry. But I can’t recommend you for consideration for a grant from the Global Consortium. We invest in responsibility and success – not inevitable failure.”

Paul and Felix walked into the common hall where Lerato was reading. She couldn’t hear everything the two men were saying, but she could tell from the pitch of Paul’s voice that things were not going well. He was pissed.

“Lerato are you done here?” he growled.

Paul turned and strode towards the door. This was her cue to leave, obviously. Lerato packed up her bag and set Araba down, giving her and a few of the other children quick hugs.

Felix Darko stepped forward from the shadow where he had been standing like a cat in wait of lesser prey.

“No, Ms. Gqukani, you won’t,” he sneered. “I suddenly don’t think we will be needing story time anymore. You are now dismissed.”

Lerato stood stunned. What the hell had happened? She fought the urge to call Felix Darko a few choice names. How dare he presume to dismiss her from a volunteer position!

There were children present. She checked her rage, gave a few more hugs to the kids she had just gotten accustomed to seeing and left. She caught up with Paul as he was hailing a taxi.

“What happened back there, Paul?”

“Incompetent Africans,” he snarled. “They can’t do anything right. And then they expect people like me to fix their mistakes.”

“I just lost my job, Paul. Felix sacked me,” Lerato said mournfully. She looked at him with pain in her eyes, expecting him to go back and throttle the man, or at least demand he re-instate her.

However, he did not.

“I keep telling you it was not a job, Lera,” Paul said wearily. “Besides, you didn’t belong there. You’re better than that.”

“Why do you keep doing that?”

Lerato was gritting her teeth and clenching her fists. Paul looked at her quizzically. Was she really angry?

“Doing what? I just saved you from hell!”

“But I didn’t ask to be saved, Paul. This is the second time you’ve robbed me of my passion. There will not be a third.”

Paul patted her knee patronizingly with one hand and wrapped his arm around her shoulder with the other. When she recoiled, he drew her in tighter.

“I know what’s best for you, baby, and this wasn’t it. Besides, we’re leaving Accra at the end of the week. It’s time for this little experiment of yours to end. It’s time for both of us to go back home.”

He chuckled and whipped out his iPhone.

“What are you doing?”

“Calling the airline to change our tickets. You didn’t think they were going to change themselves, did you?”

Jesus. This man was insufferable.

Stranger In My Bed

Do Women Have Rape Fantasies?

7 comments On LSD: A Kraken on the Loose