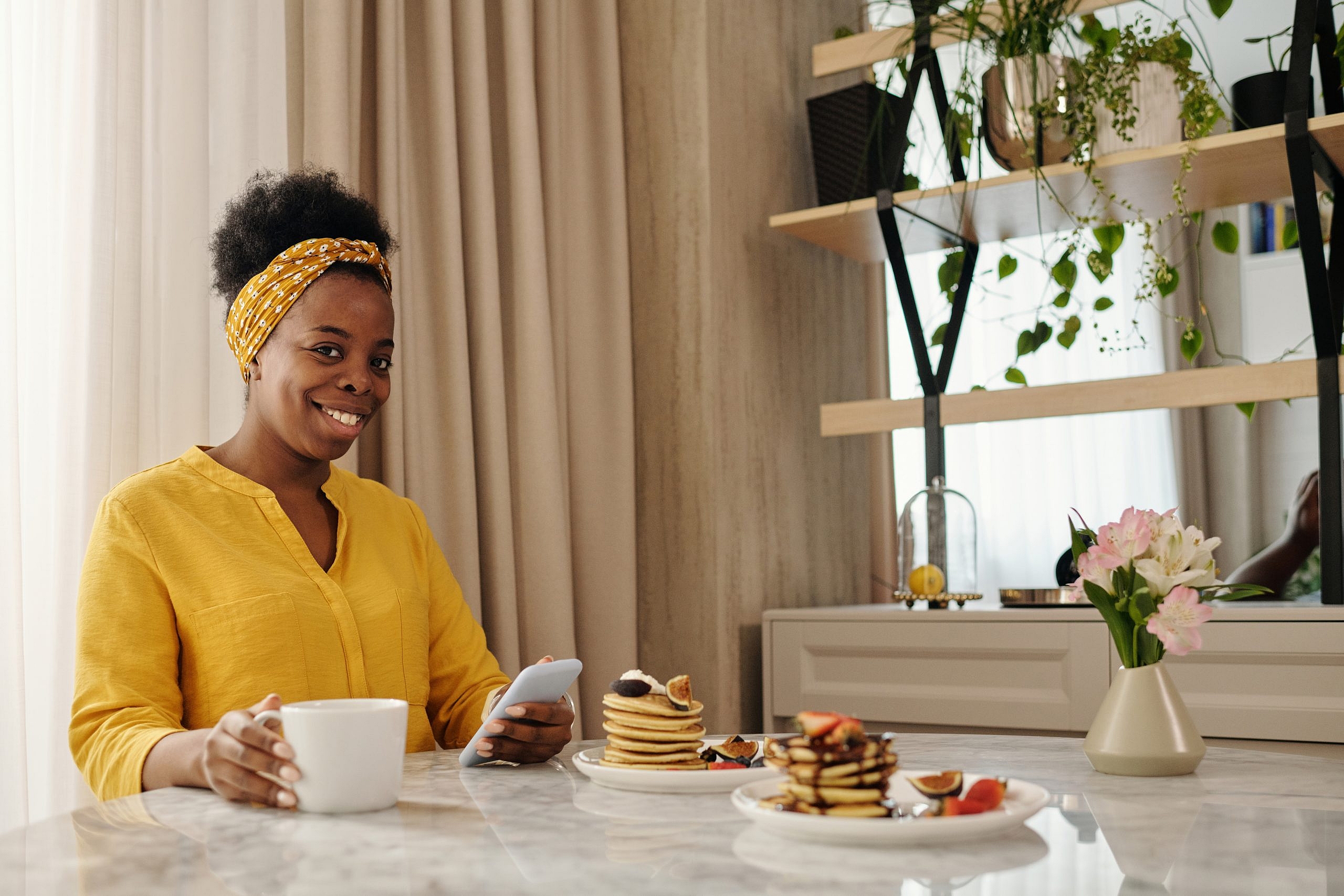 The scent of bacon grease hung in the air.

Diane cracked her eyes open and looked to her right. Kodjo’s side of the bed was unrumpled. Either he had gotten up and folded his sheets over early that morning or he hadn’t slept in the bed at all that night. Diane guessed the latter. Whenever he was feeling particularly distressed about one thing or another, he often slept on the couch. After her manic self-loving display last night, it would only make sense that he would seek solitude.

She reached for the silk copper-colored kimono that hung on the oak bedframe of her super king sized bed. Diane sighed when the soles of her feet touched the soft shearling carpet that had cradled her lithe body on many an afternoon. It was like an old friend to her now…a cohort in her quest for some self-pleasure. Diane rubbed her big toe pensively along the corner where she had discovered the power of masturbation two years ago. At thirty seven, she had finally gathered the pluck to touch herself – to discover the places within her that Kodjo had long been familiar with. It seemed so strange that he should know her own body better than she. Diane grunted in half-amusement, half-disdain at the thought of how Kodjo’s impotency had changed so much in their lives.

Sniffing breakfast cooking again, she inhaled deeply and made her way down the double helix stair case that descended into the foyer and padded down the hallway into the kitchen. Kodjo was bent over the range of the stove with a pair of tongs in his hands carefully turning breakfast meat so that it would not burn. The twins were at the table, swinging their tiny legs and babbling to themselves in their secret language. When they saw Diane, they burst into wide, slobbery grins.

“Mawmmieeee!” they screeched in unison.

Diane smiled at their delight. How could she not. “Good morning girls. Is Daddy making breakfast for you?”

Kodjo was watching her carefully, as if he was unsure about his next words. “Did you sleep okay?” he asked cautiously.

Diane poured a cup of orange juice and mumbled into it. “Yeah. I figured.”

Husband and wife regarded each other for a long agonizing moment. Diane wanted to reach out and hug Kodjo…confine him in an embrace so tight that it would assure him that she still loved him. It’s just that she was so ANGRY. She ran her eyes over the length of his body. He was still a good-looking man. Age had only made him more defined in some area. Kodjo was a slave to the gym; always had been. She longed to trace her fingers along rigid pectorals that shielded the sturdy drumming of his heart. She longed for the heat that emanated from his lower abdomen. Her eyes traveled upward to those full, pink lips and high cheekbones, now shadowed by stubble of his unshaven face. She could kiss them for days. The bobbing of his Adam’s apple told her he was harboring similar, lustful thoughts.

The twins pulled them out of their trance. “Bacon burning, Daddy,” they said in unison.

“Here. Let me do that,” Diane offered quickly. She reached for the metal tongs and pushed Kodjo aside.

His voice was crisp with irritation when he replied to her forced proposal. “I can still cook breakfast. I’m not completely useless!”

Diane kissed her teeth and dropped her class in the sink with a clatter. It was always like this after one of those nights. Kodjo had always put so much stock in his sexual prowess and power, and now his illness had robbed him of both. His defensiveness in these moments was almost unbearable! Diane flipped through the pages of a parenting magazine, giving half attention to the images on the glossy pages. Her mind was transported to the past, when she had first met Kodjo.

He was 30 years old and on his way up the ladder to success when they’d met at Adele’s. Diane had been waiting tables to help pay for way through school. She was 19, bookish and had a hip-to-waist proportion that rappers spent weeks trying to define in song. Kodjo Adofo had refused to leave the restaurant without getting her number. Diane gave him the first 8 digits with an impish grin and told him if he was truly interested, he would find her. 4 days later, her phone rang from an unrecognized number.

“You don’t know how many insults I’ve suffered just to find you,” the voice on the other end of the phone said. He was smiling. She could tell.

“And was it worth it?” Dianed asked with a purr.

“Hopefully, we’ll have a lifetime to find out.”

Their courtship had been a blur. Like too many African Americans, Diane had never travelled abroad. Kodjo was insistent on taking to her all the places she had read about in articles and seen in the glossy pages of Vogue and National Geographic. Kodjo had bought Diane her first passport, had taken her on her first international flight, had been with her when she’d had her first bites of couscous in Morocco. A stint of wildness in her early teenage years meant that he was not the first man she had ever slept with, but he was the first she’d ever told she’d loved and meant it.

The decision to marry him had been easy. The diamond was huge, her parents were willing, and Diane was secretly 6 weeks pregnant on the night he had proposed. There was no point in raising her child alone when it could have the devotion of two parents who were bonded by their mutual adoration. When she broke the news to Kodjo his reaction was priceless. He kissed her still taut belly and made love to her completely and tenderly. It was like that every time she’d announced that they would be adding another child to the family. He was in a constant state of insatiability! No longer…

Diane drew a deep, ragged breath and looked around at the opulence that had surrounded her for the entirety of their union. Twenty years. The choices that they’d made collectively had brought them this far. For years, Kodjo had pushed himself to provide the very best of everything for his family. Diane wanted to work as well, but he’d refused. It was his “duty” to be the sole provider for his family. Was that African male bravado or something else? Diane had nothing to compare it to. She should have insisted though. Should have been the “strong Black woman” that her man could depend on to hold it down, but Kodjo had been adamant. All those late nights working on schemes and deals, eating food from God-knew-where in cities in countless states and countries had taxed his body to the point that his blood pressure was sent sky rocketing.

It couldn’t have happened at a worse time. Now the tables had been turned. It was Diane who was in her sexual peak and Kodjo was in no position to satiate her desires. Sure, he could stop taking the medication that had drained the life out of his cock…but that could kill him. And then what would she and the children do; with a house they couldn’t afford and a mother with no degree and no work experience? Damn his pride and damn her meekness for letting it get to this point!

Diane got up and reached around her husband as he was plating food for their two young children. She set an orange bottle with a white cap on the dining room table, rattling them for effect.

“Don’t forget to take these,” she said dryly.

Kodjo raised his eyebrows as Diane made her way back up the spiral stair case. “Don’t you want some breakfast?” he asked quietly.

“No,” she replied, shaking her head vigorously. “I’m not in the mood to eat. I think I just need to take a shower.”

Moments later, the sound of their bedroom door clicking shut and the noise of rushing water vibrated through the pipes snaking through the inner walls of their home. Karen and Karina cackled in sweet toddler voices soon after.

He silently unscrewed the cap to his blood pressure pills and tried to block out the sound of his wife crooning her way through another lonely orgasm.

Renting is for the birds: Shag buddies versus long term partners