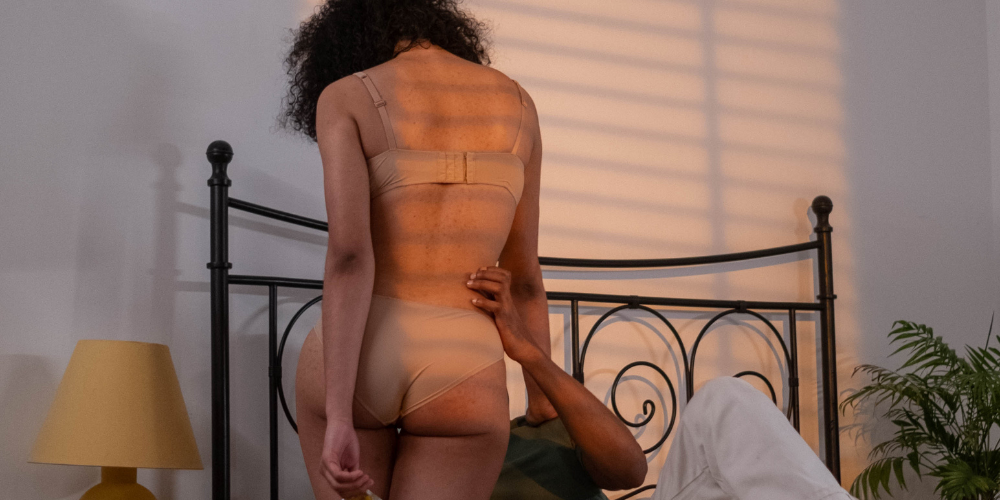 Marisa rolled over and felt the warmth of his body next to hers. She took a deep inhalation and the smell of half worn cologne and dried sweat filled her nostrils. Through the night their bodies became untangled from their embrace. The only thing that remained was his hand firmly gripping her buttocks. The thought of his hands on her made her smile to herself.

His chiseled body lay halfway covered by the sheets. His chest rose and fell with the sounds of a light sleep coming from his lips. Marissa’s eyes took in the length of his arms, chiseled chest, lightly tanned skin and before she knew what was happening she was syncing her breath with his, it was as if their bodies were in harmony.

I guess that’s what three long days of a healthy appetite of room service, hotel movies and sex on a whim will make you do. She thought to herself.

Marissa was never much for over staying her welcome, to put it more accurately she preferred to give men the mystery of her company as opposed to the actual reality of it. She wanted to be remembered in only the good times, she never wanted a man to look back on her time with her, no matter how brief it was and remember anything unpleasant. The reality of love never really concerned her. She knew it was like reading a novel, you could pick it up and put it back down whenever you chose, if you so chose.

The sound of his body moving in the bed made her snap out of her train of thought. Her attention was back present in their room in this moment. The light of the day was peeking through the closed drapes. There was always a crack that let the light through, reminding her that this situation however pleasant was coming to a close.

The light illuminated his silhouette and she thought to herself this would make the perfect picture but quickly thought twice about it.  Her thoughts continued, Do you really want a picture of this man that you’re never going to see again? Isn’t that just more torture?

Instead of reaching for her phone, she slid her hands under the covers, past the waistband of his boxers, and down to his limp member. Marisa liked the idea of arousal on men, it was so immediate and so evident. With men you knew exactly where did or did not stand. Men could not will themselves to not react to touch or sexual stimuli.  The transformation was always a beautiful one. No matter how large a man could get, they always remained a fraction of themselves unaroused.

She took him into her hands and slowly started to work his shaft up and down. She began to awaken him with her tongue tracing a maze the length of his neck. Each movement random yet deliberate. She wanted to wake him to the dual sensation of her hands and her mouth, on either end. She could feel him stirring, but he would not part his eyelids instead he opened his legs wider and squeezed her butt to encourage her to continue. Knowing that he was now awake, she took her lips to his earlobes and began a soft suckle at their tips.

She whispered in a low and melodic tone, “Good morning. “

A grin spread across his lips and his palming of her behind became more aggressive and before she knew what was happening both his hands lay beneath her buttocks pulling her on top of him. She let out a laugh.

“I take it you weren’t really asleep, huh?” She asked in a more of a laugh then questioning tone.

“Oh I was asleep alright, before you came to my side of the bed agitating me!” He replied.

“Well this was the first morning you woke up not at full command.” She said as she playful jabbed her index finger in his rib cage.

He let out a laugh and reminded her of their marathon sex session which ended at 4:00 AM, “Perhaps someone is tired, we just went to bed a few hours ago.”

She glanced at the alarm clock on the nightstand and saw it glared back at her announcing the time at 9:28 AM.

“That was a full five hours ago! You are more than ready to go again.” She said, sort of joking, but mostly not.

He looked up at her and could tell she did not intend to leave him alone until he fulfilled her morning routine. He was more than happy to oblige.

Without a moments hesitation he grabbed both of her thighs and pulled her body from straddling his waist to a seated position directly over his mouth. He wrapped his arms around her thick thighs, locking her in place as he had become accustomed to her bucking and moving all around on him. He wanted to make it clear she was not to leave until he consumed every drop of her.

His tongue was bringing her waves of pleasure, each one more intense than the one that had passed. She knew at this rate she would not last long. She glanced down between her legs and saw his eyes gazing up at her, urging her to release. As she locked eyes with him she grabbed a fistful of his curly soft hair and let the final wave take her under. She came all over his scruffy beard that had not been maintained over the last few days. He never released her.

“Ride Me!” He commanded of her.

His grip eased up and she began to ride as if it were not his face she was sitting atop. His nose became the aim for her clitoris. As she rode him she arched her back and reached back to see he was now fully at attention. She began to simultaneously ride his face and caress his engorged manhood. Marisa grinned to herself when she thought of the fact that her pleasure had aroused him. She was beyond ready to return the favor but she knew he would not release her thighs until she gave him what he worked for. As if on command, she started a circular grinding on his face and she let out a scream before she could catch herself.

The way her body reacted was always exciting to him. Just watching her climax brought him closer to his own release. He was seasoned at withholding and pacing himself. He knew that if he could just give her more of what she wanted, she was always ready to go above and beyond for his pleasure.

Marissa slid off his face and landed at the top of the bed. She heard him get out the bed and reach down in the pile of clothes for one of the remaining condoms. When he returned she was buried in the pillows still feeling the after shocks from the intense orgasm she had from riding his face. His strong athletic arms reached out for her legs and before she knew it she was pulled to him with her body on full display.

His large hands spread her legs wide and she watched his face as he took the tip of his penis and teased her clit. He then began to slowly insert himself and then removed himself from her. Each time she held her breath, only exhaling when he was out of her again. The teasing had gotten her even more aroused so on the next insertion she gripped her vaginal muscles tightly around his member and drew him deeper into her. The teasing had to end, he was not the only one who could command the other’s body.

He grabbed her legs and joined them together at her ankles. She could feel every inch of him as he thrust in and out of her. The friction of her thighs coupled with the steady sensation of him entering her made her lose it quickly. The first signs of orgasm began to spread through her body like wildfire. He stood over her and never stopped his position or speed, he knew she was already orgasming again. Her walls contracting made him reach another level of excitement. He knew arousal before but not like this. Whenever she was around there was always a semi hard on, whenever he was inside of her he never wanted to orgasm because that signaled the end. He just wanted to stay inside of her. Feeling her wetness, her walls, watching her receive pleasure.

Marissa locked eyes with him as she came, that always intensified the pleasure for her when he looked at her. It also was overwhelming to watch him watching her. She averted her glance and turned on her stomach as soon as she finished. He took ahold of her hips in one hand and reached for her neck with the other. The gripping around her throat made her pay attention to each thrust, each breath, each small gesture was magnified. He pulled her torso up till their bodies met and reached around to softly caress her nipples all while maintaining his steady pace but each time digging deeper.

His body began to sweat all over her back and she longed to be able to trace every line his sweat traveled down his torso. His fingers found their way into her mouth and she suckled on each fingertip and lightly traced her tongue in and around each digit. He took his soaking fingers and began to make circular motions on her clitoris while pumping deeper inside of her. The dual sensation made her get even wetter, she could feel her juices run down the inside of her thigh. She turned her face to his and they began the deepest wettest kiss, much like the interaction happening lower between their bodies.

As she sucked his tongue and lightly bit his lip, she could feel him increasing his speed again. She knew the end was near.

“Give me what I’ve been working for!” She said, knowing the message was going straight to his penis.

She wanted him to unload in her as hard as he had made her. He grabbed her torso in a bear hug grip and rammed her full body down on to him until he had nothing left inside of him.

He never released his embrace, he just laid her softly on to the bed. As she lay there, she knew he was falling asleep. She did not have the heart to tell him she was leaving, she could not bear the disappointment in his eyes and she wasn’t ready for the conversation she knew was to come. It was cowardly but it was the best thing to do, to leave them before they left you. When she could feel his grip lighten up around her waist and the sound of his breath get heavier, she wiggled free and quietly crept around the room collecting 3 days of clothes and memories. Good bye’s were always tough, which is why she avoided them. She left him a note that simply said It’s been fun

VLOG: When Men Say They Are Tired of ‘Sexy’ Women, What Does That Even Mean??

Loving a Black Woman is a Revolutionary Act

I Wanted the “Ghanaian Dream”