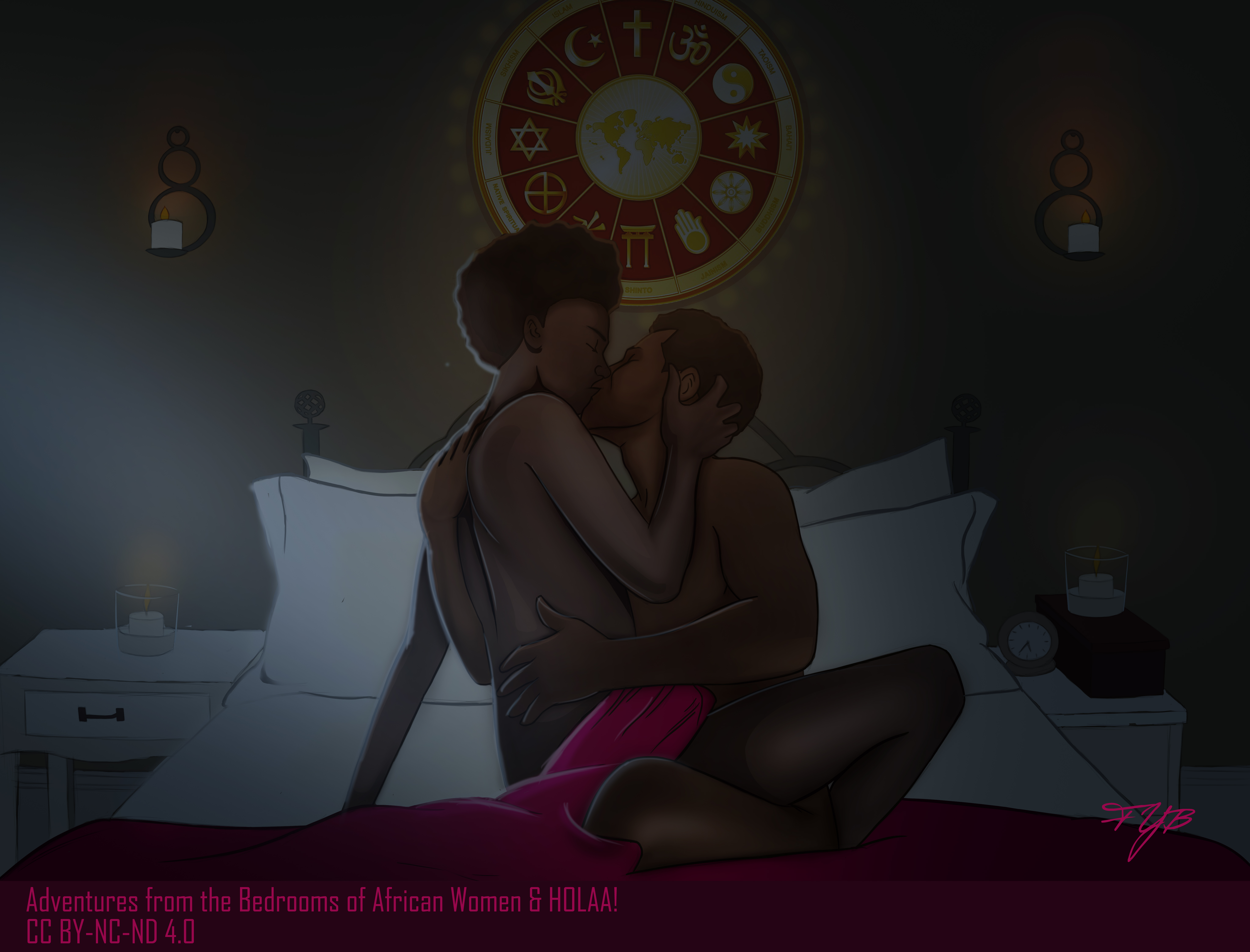 Illustration depicting a man and woman wrapped around each other

I doubt I’d had that much sex in my life. I doubt I know myself fully. I cried a couple of times with my ex. I cried through those moments of intense whatever it is I thought I was feeling. The feelings were often preceded by a flush of heat that rose from my chest to my face and then to my ears. Maybe the heat exploded like a balloon full of water on my head because right after the heat exploded and filled my head, I’d sob like I’d received news of a person’s death.

I’d been feeling low lately, I was at the point where I could feel myself being sucked into the madness of routine life. My mornings were hellish and sometimes I broke into a giggle at the mere realization that I’d started having audible lengthy conversations with myself. I’d converse with myself over inconsequential things such as Chipotle for lunch or what excuse to give my supervisor for my lateness. And then there was also that occasional itch in between my legs. An itch that merely happened as a result of an absence of an obvious occupant deep within the walls that led up inside my uterine cavity. How apt and boringly scientific. In plain terms I needed to be laid. I suspected I was going to lose my mind over it soon. Not that it was the most important thing under the sun, yet somehow, it was as important as wanting to scratch the bite some mosquito had left on my thigh while I ate attieke and fish on that dark street corner in Osu. My fingers were oily and I knew that scratch would bring me more pleasure than pain. So I scratched anyway…

Presently, there were tons of dicks to do the scratching of this specific itch between my legs. I mean, I lived on a college campus, where young blood coursed through the veins and muscles of bored youth. I could take my pick, and resolve the itch permanently or temporarily depending on how well the object of interest carried out its arduous task. Really, I had options, but for some reason, I found myself wanting that Igbo spice.

I liked to call him Igbo spice. I’d become a hoe with him. I could have him with anything and everything. Sandwich, noodles, stir fry, coffee. He did it so well, and the irony was that he was so young and different. Not that young, but young enough to maybe let me feel like a mini cougar. Well, actually he was full of ironies frankly. Igbo spice had tricks my older men couldn’t show me. Age was really just a number. I discovered that fall that I responded sharply to a dual combo of fingering and short flicks of his tongue on my left nipple. That combo was the perfect segue to whatever else our bodies wanted. He’d go till I decided I’d had enough. Oga save some pussy for tomorrow. We’d laugh over my ineptitude and talk for hours. He liked the massages I gave from spending hours gleaming through the pages of whatever sex and lifestyle magazine I could find. We chilled for over a year and then one day, I walked into Oga’s apartment to find him with another human. The Cliché- est occurrence of my year. The scene itself was cliché and my reaction was even more obscene and very cliché indeed. I hit him across the face and dramatically made my exit. Lil Kim and Rob part 2.

Caroline save your drama, I don’t need it in my soap opera.

I couldn’t thank Davido enough. I was done. I was so shaken though, mostly because I hadn’t ever been in that situation where you walk in on them and they stop and jump up and he/she tries to explain and insert whatever else eventful ending. Oga and I were exclusive by the way. Exclusive sexual partners or friends or humans, name your preference. We weren’t dating so technically, I had and would’ve had no right to hit him even if he were my boyfriend. And by the way, I concluded post this experience that the term boy/girlfriend too is overrated. A boy or girlfriend is a human and is entitled to their own actions and rights. Just because another person does not necessarily treat you the way you expect them to does not mean you react in a certain way. Then again, due to the luxury of titles, people succumb or do things that do not make any sense. So just because you earned a title (which isn’t tactile by the way) you feel entitled to certain things or lose sleep over what to do for the other person and the other person, in turn, has expectations they want to be fulfilled just because they’ve gladly awarded you a title which you wear on your chest.

I reasoned out that a lot of our actions and reactions in life are preconditioned. We are born, socialized and see patterns and we adopt them too. What if you were born into a world where if a human ‘cheated’ on you, the natural response would be to keep it moving? And do wo (men) not exaggerate too sometimes? Why do we play victim and say oh (s)he broke my heart or oh (s)he’s such a dog. People are selfish and that’s all there is to it. People want to eat Jollof and still have the Waakye by the side. Still probably keep the wele and maybe have some tilapia too. Maybe if we came to terms with the universal problem of selfishness, we wouldn’t behave like we were part of reality shows if/when certain things happen. These days my approach to the ‘cheating’ conundrum is simple. As a rule of thumb, I inquire if the adventure was intentional and if the perpetuator is remorseful. Will they do it again, do they still want me? If they can try to be a better human, we can work, or move along? If they absolutely cannot, if they show no signs of remorse, if they keep getting back in the playing field, ah then my friend it is time to say bye bye.

By the way while Oga and I were in our little lover’s world, I broke our exclusive arrangement and did a thing or two. I’m sure he did too, that or the fact that he alluded to having done a thing or two while we were in our web. Post my dramatic exit, we put up sexual boundaries for a year. He did not convince me in any way to allow him back to hitting it, neither did I do any of that. We remained friends and stuck with our lengthy phone or text or in-person conversations. One day, however, I slipped and fell on his dick and so we are back to scratching each others’ inner thighs. This time we aren’t exclusive, better put, we haven’t agreed on anything. We just fuck when we can. We are aware of each others’ ongoing and past exploits and still talk about whatever else we want to talk about.

Finding pleasure: a song or poem

‘Bebe Can I Get Your Nomba?’ by Guest Contributor VV