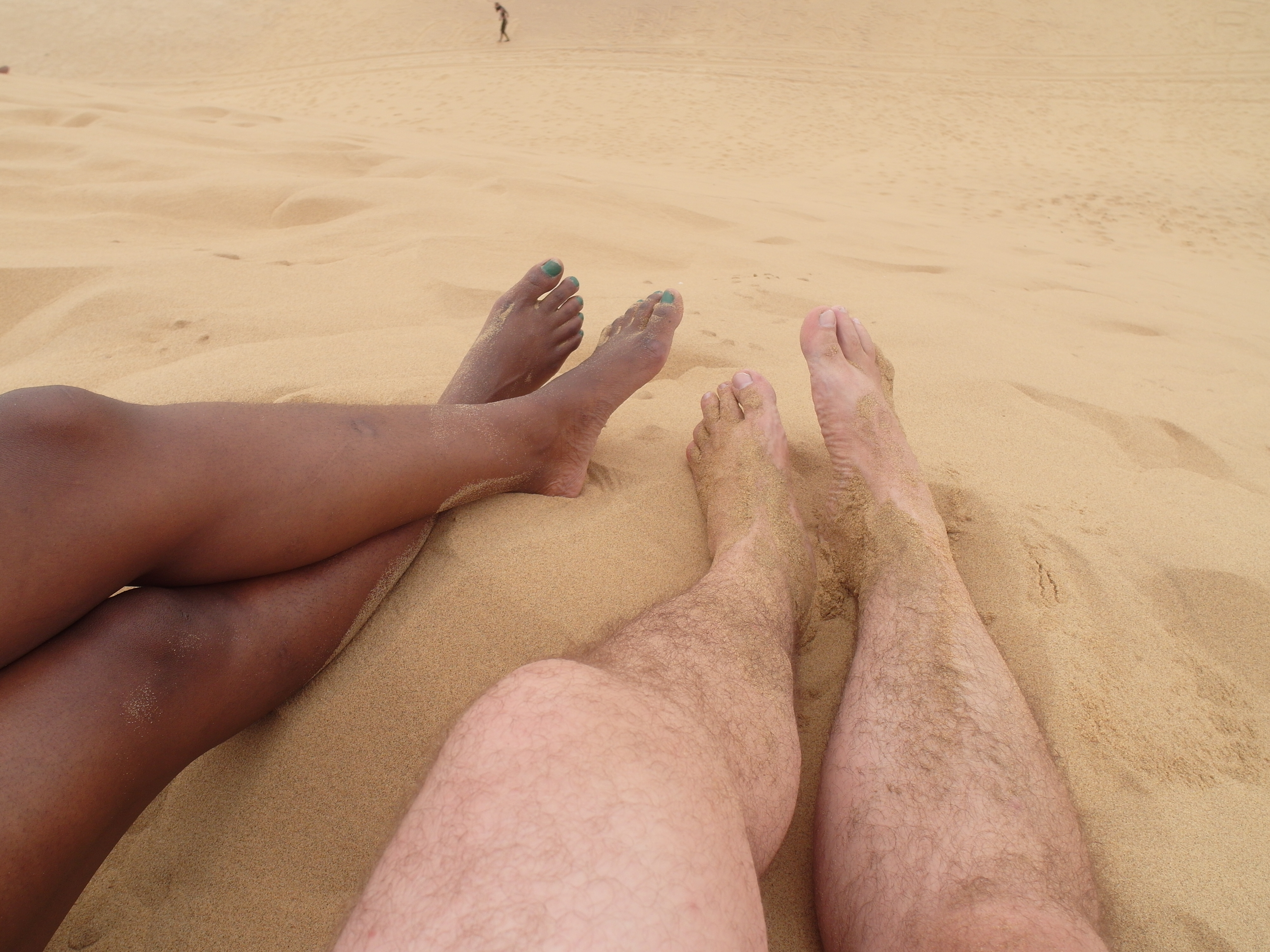 Image showing the legs and feet of an interracial couple

What brought me here is heartbreak.  After being in a relationship for almost three years and having experienced it ending, I decided that it is time to write and share my thoughts and experiences with the world. This piece is directed toward women that think dating or marrying a white man makes you immune to emotional or physical abuse.  My story is not intended to paint white men as superior nor inferior to black men. Race is a sensitive topic, and it will always be if we do not talk about it. However, the reality on the ground is that discussions in our society only highlight the fairy-tale aspect of interracial relationships.

I met my person at a wedding, and I liked him. We exchanged numbers, and a week later we had our first date. I remember being mesmerized by his green eyes and blonde hair. His European features appealed to me as I have always been attracted to white guys. I found myself travelling every weekend to visit him.  I remember vividly the day I walked into his apartment and I noticed his former girlfriend’s clothes and cosmetics. It bothered me, and I asked him to return her things.

Things weren’t always bad. In fact, they started off great. He was undeniably sweet and romantic. I introduced him to my friends and family. Despite constant disapproval from my family, I went ahead and loved my person. He was my world, my friend, and my confidant.

Unfortunately, as we became more comfortable around each other, he started to become hurtful. He got upset over minor things, such as the way I washed dishes.  The red flags were obvious, but I think the fact that he was not always hurtful made leaving him harder for me than the abuse itself. I was attached, and I had seen a person in him that was capable of being a wonderful boyfriend. He became protective over his phone and every one of his electronic devices had passwords. My person only had women friends.  Without my knowledge, he would bring them home and exchange half-naked photos with them. If I dare questioned him, he would say that he did not like my nosiness and that they were merely his friends. I learned to let things be, but over time I would gather courage and question him on his relationships with his women friends: Were they in solid relationships and were their partners aware of his relationship with them?

Things got worse, to a point that I could no longer trust my person.  Our conversations turned into arguments and I tried walking away, but he would convince me to stay either by crying or getting me flowers. Each time, he swore he would change, and I believed him. He made me believe that I was the one causing the problems in the relationship because of my lack of trust in him.

The external pressure and societal expectations started getting to me, friends and family would compliment me and say, “do not leave him, he is a nice guy” or “white men are scarce”. So, in my head, I was telling myself that with time he would change and that things would get better once his business kicked off. I supported him in everything, I attended all his creative projects when nobody else believed in him. I upgraded his wardrobe and bought him clothes as gifts; so when he attended business meetings, he looked presentable. From hairstyle to home decor. I was proud of the person he was turning into.  I told myself that if he is happy then I am happy too. But little did I know that no matter how hard I tried, it would not change the disrespect he showed towards me. My efforts were meaningless to him.

Things spiralled out of control, and I felt helpless as I lost my identity, friends and independence.  The cheating and controlling behaviour got worse. I had to be at home at a specific time, and I had to eat when he wanted to. I could not ask girly treats, because he made it clear that he would not buy materialistic gifts for his partner nor was it his responsibility to do so.  The game drives and baecations stopped. I stopped going to church and I could not listen to gospel music because he considered it “too noisy”.  I became emotionally and financially dependent on my person.  I lost my decision-making ability to a point where I stopped cutting my hair because he preferred me with natural hair.  My person would hide the keys from me whenever he disapproved of me leaving the house. Once, he locked me inside the house and left, because he did not want me to meet up with a male friend who was willing to have a mock interview with me, in preparation for a job interview. I found it amusing, thinking that he was “just jealous because he loved me”. Whenever I was in his presence, I felt like I was walking on eggshells. I loved it when he was away with work because I loved the freedom of just being myself, and similarly also the attention he gave me when he was out of town.

As time went by, I questioned whether he loved me like the way I loved him. My person undermined me by brushing off my ideas about interior décor which is one of my interests. I had to be submissive and had to beg him to do things for me.  I remember vividly on the day of my graduation, he kept on yelling at me for not being organised, because my hairdresser cancelled my hair appointment. He slammed the brakes of the car and pushed me out of his car. The abuse continued to a point that if I asked to go on a date with him, he would refuse and insult me. Interestingly if somebody else asked him to do exactly the same thing that I wanted the two of us to do, he’d agree without any doubts.

My body, self-esteem and social life withered away. I was too focused on being the best person for him. I thought that if only I tried harder, things would get better with time. But they never did. No matter how hard I tried, my person was just not bothered. The abuse became my reality because I felt that I could be his therapist. I was haunted by what his mother once told me: “he is just like his father” and that she was subjected to “emotional abuse at the hands of his father. I felt that I could not leave him, because I am all he has.

I covered up our problem by being affectionate in public, updating my WhatsApp status with photos of us together. The ‘approval’ from others made me feel good. But yet again, my person continued showing me his disapproval and disrespect. Our times together, particularly the cooking sessions became battlefields. The bottle of red wine became my best friend as I was more confident around him when I had one or two glasses of red wine. Interestingly whenever we met up with people that knew him too well, they would always ask me questions regarding our relationship. They were amazed every time I told them that  “he has changed” and that “his business is doing really well”. I gave up my shopping habits because I needed to help him out. It was reciprocal, but I did it without reservations in my heart. I was thinking of the future. Couples support each other during the bad and the good times. Or so I thought!

My family spoke to me, but I thought they just did not like the idea of me being in a relationship with a “white guy”.  His mother knew and she was sympathetic, she tried talking to him, but he convinced her that we were doing fine and that he is taking great care of me. She encouraged me to stay and because of this, I would say to him ” why are you not as kind-hearted as your mum”.

My “white person” has a lot of followers and social media, and each time my heart would drop reading his status and comments on the importance of protecting the rights of women because he never used his own advice at home. He publicly shamed anyone that dare broke “the golden rule”. My person is a very talented and well-respected professional who dedicates his craft to showcasing the beautiful love stories of couples.

I sank deeper and deeper. I thought that ending a relationship with a white man was an abomination. I was gullible and I wanted to have a perfect interracial relationship like the ones I watched on Youtube. I refused to take ownership and acknowledge that my relationship was destructive to both of us. I walked around with the guilt that I am a failure in the eyes of society because I could not maintain a romantic relationship with a white man. I was in denial with my own reality that I was in an abusive relationship with a  white European man, who I all along thought, because of his race and background would be more loving than the black men that I dated in past. I always thought that as an educated black woman, I would never become a victim of emotional and physical abuse at the hands of my white boyfriend. I ignored my intuition and condoned the abuse by keeping quiet and isolating myself from friends and family.

Fortunately, he broke up with me. I knew deep in my heart that I was completely drained from the relationship and that I was happy to finally be able to start afresh. At times, I felt lonely, worthless and stupid. Other times, I was just angry. Angry at him for treating me bad, but mostly angry at myself for not listening to people that loved me and not leaving sooner.

I have a very strong support system, particularly my family who have been instrumental in my healing journey. They welcomed me back home with open arms.  I cried, I read blogs on emotional abuse, watched and listened to T.D Jakes every day and I spoke to myself all the time, telling myself that “I am more than a conqueror through Christ, who strengthens me”.

Finally, I understand that my journey to healing is a process that entails learning to love myself again and forgiving myself and my former person.  However, in our society emotional abuse often gets pushed under the rug, because no one really sees the effects. No one deserves to be degraded, and it can happen to anyone. Therefore, I felt that by sharing my experience, I would shed light on abuse in interracial relationships. Our society often shuns women who speak out against abuse, forgetting that by sharing our experiences we are helping those that have a fear of walking away from abusive and unfulfilling relationships. We need to stop telling women that it’s a privilege to be in an interracial relationship. We need to encourage women that it is okay if your relationship does not work out and that you are not defined by your relationship.  So if your person proves to be not worthy of your love, it is okay to walk away because you have the strength to do so, and not because you are paranoid or crazy.

How can survivors of child sexual abuse move on? By Irene Antwi

‘This Pain…’ by Guest Contributor Tendai Garwe aka Sokostina

Guest Contributor Saffron & Lace: “Morning (and days) after that night before”