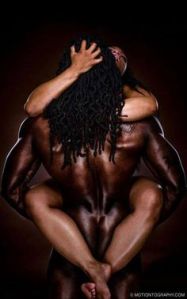 Unable to hide his own excitement, Maleek pressed himself against her thigh, rubbing his hard, denim-clad cock in tandem to the rhythm of his fingers inside her. He moved the sheer sleeve of her dress off her right shoulder and exposed her breast, her puckered nipple inviting him to taste.
He bent his head and savored every inch of it, circling his tongue and biting into it ever so seductively till her body froze and finally exploded around his hand, her other hand entangled in his locs.

Slowly, Maleek withdrew his hand and put it close to her lips. “I want to see you taste it”, he said.
Zara parted her lips as he placed a finger inside her mouth, then another, and closed her eyes as she licked them. He pulled his fingers out and traced a third finger along her bottom lip, leaving her wetness glistening on her lips. Then he slowly licked it away.

“Damn it! Damn Zee!” Maleek let out unable to hide his desire for her anymore.
“Don’t move Zee…allow me…”, and with those words stripped Zara of her dress till she had nothing on but her soaked panties. “I want to see everything…may I?” he asked, nodding towards her center.
“Take it all off…and then get in” she responded boldly.

Maleek cast off his shirt quickly and proceeded to unbuckle his denims. Immediately Zara realized there was nothing else beneath the pants and the sight of his abdominal hairs trailing down to his manhood excited her and got her wetter. Now stark naked in all his glory, Maleek lay beside her and stroked the length of her body, taking a long look at the beauty that she was. He’d wanted her for so long. Yet now that she was right there he didn’t want to destroy her body with his ravenous hunger for it.

Zara turned to her side and faced him squarely, allowing her thigh to brush against the tip of his cock. The cold pre-cum she felt was more than enough to drive her wild. She pushed him on his back and straddled him. She proceeded to brush her clit with the tip of his cock till she realized he was losing his cool. Over and over she did so, pausing only to lean over and kiss him deeply. “Now do you want this?” she asked with a teasing lilt in her voice. “Don’t make me show you just how much Zee…don’t ask for what you can’t handle…” Maleek barely let out, voice husky with desire. “I want you to. Show me. Now!”

The words had barely left her lips when he grabbed her hips and pushed her deep down onto his rod. He was in control and he was going to make her eat her daring words. Zara tried to regain control by moving her hips to her own rhythm, but Maleek did not want to have any of that. He spun her back on to the floor while he was still buried deep inside, raised her left leg and thrust once more.
As if their bodies were sharing an intimate secret, they both moved in unison and rhythm with the familiarity of old lovers.

More and more, Maleek relentlessly dug into her with deep, hard thrusts, and with Zara’s screams of pleasure, he drove both of them to climax, a communication between their souls, united by a bond they’d long shared but hadn’t dared to explore.

As Maleek relaxed from release, she held him close, while the flame of passion remained unabated within each of them.

Maleek pulled himself up into a sitting position with his back against the armchair, and looked down at her body. He still wanted her. There was no doubt about that. And he was going to have her again and again even if it meant risking his heart and tempting fate one more time.

As if she had been reading his thoughts, Zara got up and knelt between his legs, feeding him with her breasts, while she stroked the tattoo on his left upper arm. She could see what it was now; it was an arm-band tattoo of chains in different sizes interlocked within each other. As she was wondering what it meant, Maleek pushed her back onto him, making sure her clit was right on top of his cock while he nibbled on her breasts and rocked her hips against his length, driving her wild once more.

“Hold on”, he ordered, and stood up, hands locked beneath her ass. Zara locked her legs around his waist for extra support as Maleek carried her over to the wall. The bricks felt hard and rough as they dug into her back, but it was the kind of discomfort any girl in her position would overlook.

For Zara, she wanted nothing more than to have Maleek devour her again, and again and again.
And he did. He tugged at her very soul with each thrust and grind. He pulled out and rammed in with a thirst for more from her holy places. He tore through her essence with every inch of him, craving more and more with each hit.

As their bodies reached the peak of intense release, both knew within their spirits that this was one fire neither of them was ready to quench, no matter what lay ahead.

Zara and Maleek have finally dared to take a chance with each other. Will it be the dawn of a beautiful relationship or a curse?  ……THE END

Trying Out HIV Self Test Kit

Stranger In My Bed