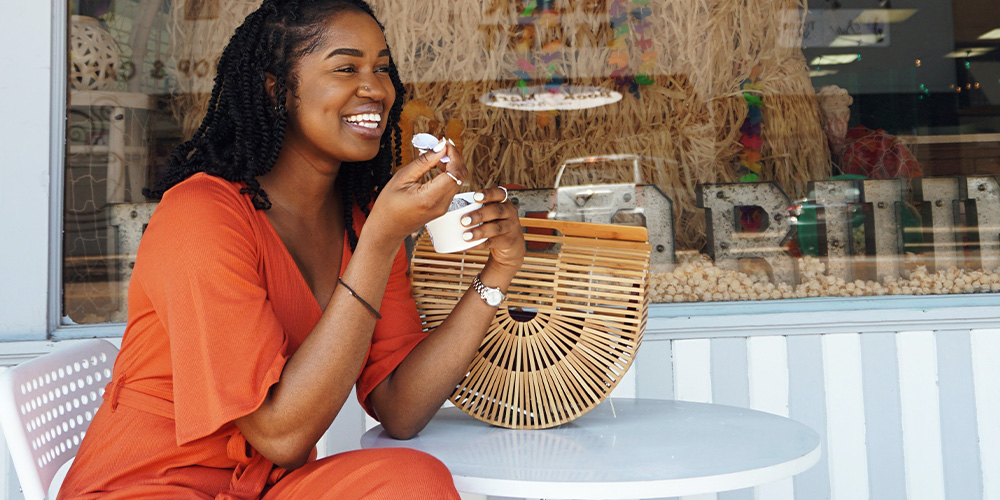 A heavily perspiring Fan Ice seller peddled enthusiastically up to “To God Be the Glory.”

The brawny  young seller mopped sweat off his face with a damp towels and politely asked Cecilia what she wanted.

“Give me chocolate. And one strawberry yoghurt for my friend.”

Lerato tried to tell her that she wasn’t hungry but Cecilia hushed her and handed her the blue and white packet. Lerato hated to admit that the sudden flash of ice felt good in the palm of her hand. It was indeed hot outside.

Lerato studied her friend pensively as she half flirted with the shy seller. Cecilia had the build of an Amazonian warrior of an age gone by. She was tall, lean and muscular. Today she had instructed Thomasina to take out her weave and sweep her shoulder-length hair into a sleek braided bun. With her gladiator sandals and bronze dress that hit her just above the knee, she looked the part to capture and devour any man who crossed her path. Had she captured Khalid in the vice grip of those perfect, serpentine legs?

“Why aren’t you eating your yoghurt?” Cecilia asked. She sounded pained.

“Cecilia… How well do you know Kal?”

Cecilia waved the ice-cream seller away with a ‘yooo, next time’, and turned to face her friend.

“Are you asking if I’ve fucked him?”

Lerato was startled by her frankness. She shouldn’t have been, knowing Cecilia; all the same she couldn’t help feeling protective – and a little possessive – over Khalid. Cecilia laughed a musky, mischievous chortle before answering.

“Oh, chaley. No ooo. But it wasn’t for lack of trying. I put on my best game, but he turned me down.”  She sniffed in disdain. “His girlfriend must have her hooks in him deep. I hate that tramp.”

“No. Today was my first time meeting her. Doesn’t stop me from hating her though.”

Cecilia choked on her chocolate treat and raised a penciled brow at Lerato.

“Ei. You this woman. You must have magic between your thighs.”

Cecilia wiped her mouth with the back of her hand and searched Lerato’s face. No. This wouldn’t do.

“Are you sure you know what you’re doing, my darling? Didn’t you just tell me Paul was in town?”

Lerato was taken aback by her maternal tone.

“I thought you said I should fuck Khalid every chance I got!”

“And you are listening to the advice of a chronically drunken woman?” Cecilia cackled gleefully. “I have more pull than I thought! Look, I’m not telling you what to do. I’m just telling you to be sure of what you want to do before you do it.”

Lera sucked on her yoghurt and furrowed her brow. She looked like a child trying to choose between two desires; a new doll or a trip to the movies, perhaps.

“I know what I want,” she said replied picking up her bag and hugging Cecilia before heading for the side of the road. Khalid’s car was rounding the corner.

“Ahhh. Me, I hear!” Cecilia hummed with a mock frown. “Call me later, chica. And give me all the wet, sloppy details. Ashawo like your type!”

Khalid leaned over his steering wheel and grinned at Lerato as she sat. He gave Cecilia a knowing glance before asking her if she wanted a ride anywhere.

“Which way are you guys going?”

“I don’t know. Wherever Lera wants, I guess,” replied Khalid.

“Then I’m going in the opposite direction,” Cecilia said with a toss of her head and disappeared into the hair salon without giving the pair a parting glance.

Lerato smiled to herself and buckled her seat belt. She felt sinful; delicious; wicked; and a little scared. It was too late for second thoughts, though. As if sensing her apprehension, Khalid put the car in reverse and whipped it around the narrow road. Lerato pressed her feet into the floor board and braced herself.

She pursed her glossed lips and sucked her teeth.

“Is that supposed to be some kind of metaphor for what we’re doing right now?”

Khalid slid his hand down the expanse of her thigh and squeezed it when he returned to the thickest part. The move made Lera shiver in delight.

God. Why did she bring him up?

“Oh really?” Khalid seemed unmoved. “And you met Ivy today, so we’re all acquainted, aren’t we?”

Lerato sputtered an inelegant laugh. How could he be so casual about the whole thing?

“So where do you want to go? Beach, mountains, or the forest?”

Lerato watched Khalid’s lips as he asked the question. How on earth could one man make the idea of going into a forest sound like a trek to Nirvana?

“Well, I have,” Khalid countered. “I’ve been thinking about it since class six. I want to take a moonlit stroll with you. We don’t have to do anything you don’t want to, but tonight we’re going to the beach.”

You can’t even begin to imagine the things I want to do with you.

“That sounds nice,” she said aloud. “So where to? La Palm or some place fancy like that?”

“I was thinking of something a little more rustic. I have a chalet at Prampram that my cousin lets me use from time to time.”

“It’s not like that at all, Lera. I just go there to think every once in a while, when things get too… heavy. That’s all.”

Khalid suddenly looked weary. What could he possibly be trying to escape? He’d always had the perfect life, or so it seemed.

They rode in virtual silence the rest of the way. It was comfortable. Kal kept a firm grip on her hand, releasing it only to change gears or to stroke the back of her freshly shaven head with his broad, calloused palm. The hands of a man who worked with his hands. Lerato turned her head to kiss his wrist and drink in the scent of cumin and citrus that wafted through his pores.

The drive ended soon – way too soon, but it gave way to a peaceful view of the Atlantic. As she stepped out of the car, soft breeze fluttered around her feet and lifted the hem of Lerato’s white peasant skirt. Khalid leaned against the hood of the car and watched her saunter towards him.

“You’re so beautiful,” he whispered, his breath quickening. “Come on. I’ll take you to the room so you can put down your bag.”

The chalet was simple and white – not much different from any other Ghanaian beach resort dwelling. Khalid showed her the bathroom, the television, the desk. He shrugged and asked her if she was ready to take their walk. Lerato frowned her keen features and threw her purse in the corner.

“Let’s not play games and toy with each other. I have a life time of games waiting ahead of me…”

Khalid took a step forward and pulled her gently to the simple, twin sized bed where he sat. He kissed her forehead, her temple, her neck…pausing between each stroke of his lips to let the tip of his tongue fleck her smooth brown skin.

Lera pressed her forehead against his and sighed. When was the last time she felt this way?

“I need you, Lerato Gqukani. And if you’ll let me, I’ll show you how much.”

A Pocket Full Of Posies….

Ask Adventures: How can I approach women?