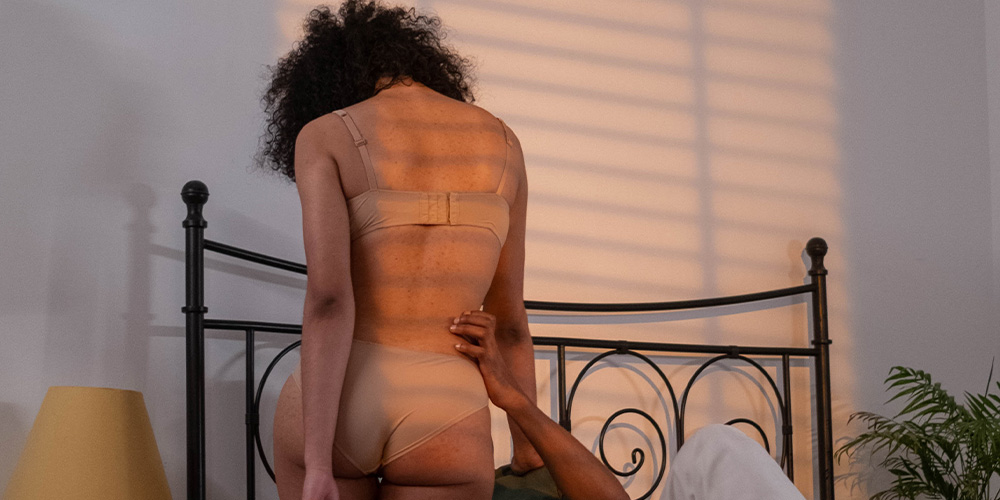 When I met Tony, I never thought that our relationship would take the deliciously dark twist it later took. I’ve always loved good boys. The quickest way a man can get to my heart is by demonstrating how kind, loving and considerate he is. Tony fit the profile of the type of man I usually went in for. We met when we were both representing clients in a matter. I drove from my office with my client to meet him. He was working for a legal aid NGO situated in the heart of Accra.

It was a sizzling hot afternoon when my client and I entered the NGO’s reception area. It was packed full of people from all walks of life who were looking for legal assistance of some sort- manual laborers in their overalls, young mothers breastfeeding their babies who had been neglected by their fathers, a handful of kayaye girls in long brightly patterned skirts with their head pans tucked between their legs and the occasional ex-wife of a ‘big man’ who had been referred to the NGO after her husband tossed her aside for another woman and left her penniless.

We eventually found Tony’s office and it was love at first sight. He must have won a gray suit when he left home that morning but because it was so hot, he had taken off his jacket to reveal the blue striped shirt and navy tie underneath. I could see how taut his tummy was because he had tucked in his shirt. I was taken with his tall, broad-shouldered frame, his crooked smile and large eyes. I was blown away by how elegantly his pitch black coffee toned skin contrasted with his milk white teeth. He would later tell me that his elementary school classmates nicknamed him ‘Koo Black’ because of his gorgeous dark skin and the nickname had stuck.  But what made me fall in love with Tony that day was how respectfully he referred to my elderly client as ‘Papa’, how he rushed to adjust the window shades once he realized that my client was visually impaired (he said he didn’t want too much sunshine to flood the room and disturb my client) and how he calmly put my client at ease by relating how his own mother had lost her sight to diabetes a decade ago.

We started dating a couple of months after this meeting and he was the perfect boyfriend and gentleman in every sense. He sent me flowers from a newly-opened flower shop in Accra; once, he actually brought me lunch that he’d cooked (it tasted horrible but I didn’t tell him lol) and he was extremely understanding when I told him that I had been in a bad relationship and needed a lot of time before I could consider having sex again.

Eventually, I started feeling extremely horny whenever I was around him so I told him that the next time I came over to his place, I wouldn’t go back home at ten pm as I had been doing but I would sleep over. I felt kind of nervous when I showed up at his house the next Saturday. Because I knew how conservative Tony was, I was expecting our lovemaking to be sweet and tender and more or less vanilla. Imagine my shock when after he had kissed me ever so tenderly, and fondled my breasts till my pussy was soaking wet and throbbing, he huskily whispered that I should go and bend over the table in his room. I was so shocked that I literally said ‘huh’? ‘Bend over that table’ he said again. This time it was stronger than a whisper.

I got up, walked to the table and bent over. He had taken off my panties and skirt at this point but I was still wearing my camisole and bra so I was totally naked from waist down. I couldn’t see myself but from the way I had bent over, I knew that my cunt was fully exposed in all its glistening glory! He made me stand that way for a couple of minutes as he admired ‘the view’ then he walked over to me and whispered into my ears,” you’ve been a bad, bad girl for making me desire you so much and I’m going to  punish you very hard. I started to giggle but stopped once I felt his penis fill me up and waves of pleasure started to flow through me. He started thrusting and a moan of pleasure was caught in my throat as I felt a smack on my ample bottom. Smack! ‘Baby!’, I shrieked as I turned round to look at him, my eyes wide with surprise. He had his crooked smile on his face. ‘Bad girls deserve to be spanked very hard, no’? He asked me. I smiled, bit my lip and continued moaning as he resumed thrusting while spanking me intermittently. I came really hard that day. It was after this encounter that I realized what a ‘freak’ my boyfriend was.

He liked to fuck in the most unusual places. Once, I came over to his office in the evening because we were going to watch a play at the national theater. I was in the middle of telling him a story when he said tersely ‘take off your clothes’. .. We were fucking on his desk and I was moaning loudly as usual when I heard steady footsteps outside his office. Oh, no the security man must have heard the commotion and was coming to check if everything was alright!  I looked at Tony as he smiled wickedly at me and said ‘If the security man comes in, I’ll ask him if he wants to join us;, it’ll be rude not to invite him you know…’, then he continued fucking me without paying any attention to the footsteps outside which ceased eventually.

Then, there was the evening that we were having drinks at Novotel and I was wearing a green tie-and-die maxi dress. He slid his fingers under my dress, caressed my thighs, pushed my thong to the side and started fucking me with his fingers. I had to try my best not to gyrate against his hand and to keep a straight face in order not to make it obvious to those around me that I was being finger-fucked.

Because we both worked in the legal profession, sometimes, he would ask us to role-play and of course he would be the ‘perverted judge’ and I would be the ‘eager lawyer’ who was willing to do anything to win her case including screwing ‘Justice Pervert’. Tony had this mock-seriousness that he would bring to these role-play sessions which made them both erotic and amusing at the same time. For example, he would only enact them on days that we both went to his place straight from the office in our suits and all. He would say ‘Counsel, can you see me in my chambers?’ (apparently, the chambers were on his bed, lol) and it would go on from there… For these sessions, love-making would involve both of us wearing our suits and only pulling down our trousers a bit to allow for sex. (since the imaginary court clerk could walk in any minute, we both had to be fully clothed)!

But the one ‘sex game’ which Tony and I played that I enjoyed the most was the ‘no sound’ game.  One Sunday, we were lounging naked on his bed and listening to music on his laptop after making passionate love. He got up languidly and took a silver tie that I had flung over a chair when I undressed him before we made love. ‘Stretch out your hands above your head, I have a surprise for you’. I put my hands above my head and he promptly tied them together with the silver tie. Then he said, while spreading my legs very far apart, ‘We’re going to play the no sound game. I’m going to eat your pussy and you’re not allowed to make any sound or move- if you do, I’ll stop”.

He started by gently lapping at my clitoris with his warm, moist tongue.  When he slowly moved his tongue down my labia I lost it and let out a little moan. He stopped immediately. ‘Baby, I’m s-s-sorry, I forgot…’ I stuttered. “Ekuba! It is utterly important that you keep quiet otherwise I’ll stop eating you out and you won’t come”, he said it so sternly that I resolved to co-operate. I did really well. I breathed heavily but I didn’t make any sound as his tongue went back up to my clitoris and started doing figure eights on it. I twitched slightly but kept quiet as he started French kissing my labia and then my inner lips. But when he started tonguing my vagina, I lost it again and groaned slightly. He stopped immediately and I felt so frustrated! He continued like that till I became dead silent and only then did he bring me to climax- it was a very silent climax indeed!

Tony  taught me never to judge a book by its cover because sometimes even the most basic black color can come in different, tantalizing shades.

Rape Fantasy – The Need for New Terminology By OLUKO