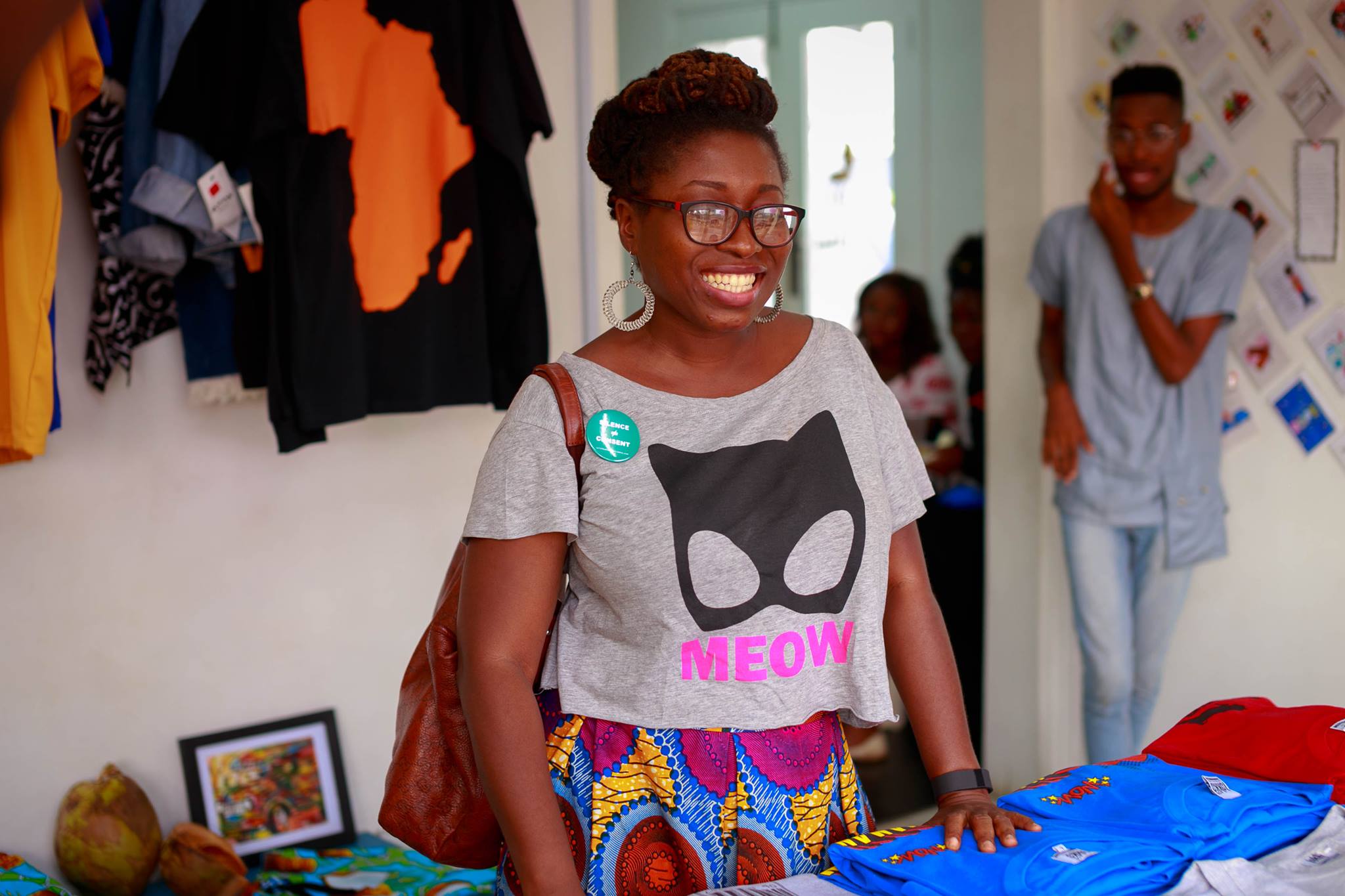 Photo of Nana Darkoa via concept store Lokko Elle. I thought the meow t shirt particularly appropriate for this post

When Nana at ‘Adventures’ contacted me and asked if I’d review a self-help book written in a novel way about sex before marriage and spirituality, I instantly agreed. As an avid fan of self-help books and as an African Christian who has struggled with the fact that I’ve enjoyed sex before marriage yet love Jesus and choose to follow him, I was intrigued. I naturally wanted to read the author’s take on the subject.

Single, Spiritual… and Sexual!, written by Cezanne Poetess and published by Artisan Impression Publishing teases prospective readers to join the protagonist, Suzanne as she embarks on a journey to find out the ‘truth’. However, it doesn’t take the reader long (by page 44) to realize that this book is not about a Christian woman struggling to stay celibate or prove that God doesn’t mind if she is sexually active; instead it is a book that follows one black woman’s self development in order for her to attain her life goals. Thirty pages later, and instigated by conversations with her non-Christian love interest, Suzanne readily discards her 28 year-old Christian faith, takes up Black history classes and studies ‘universal laws’ and has, what can only be described as an epiphany. From this point on, the reader is lead down a suffocating maze of differing ideologies – Numerology, Astrology, Mother Nature, Universal Laws, Meditations, Affirmations, use of chakras and third eyes, and sex rituals with the odd smattering of mentions of the Lord thrown in for good measure. Oh and lots of Self, Self, Self. This pick ‘n’ mix approach to spirituality I found to be baffling albeit quite unique, but leads the author to stray from one of the original questions she hints at in the blurb – what is the truth about sex before marriage and your relationship with the Creator? I felt this question was never answered, but couldn’t be answered simply because that’s really not what this book was about. The author was quick to discard the protagonist’s relationship with the Creator and allowed her to take on the form of ‘god’ who she discovers inhabits in her. In this process, Suzanne then learns to harness what can only be described as the ‘god’ particle within her to release her natural powers and ‘bring birth’ to her life goals (very New Age, I know). It is this approach that changes the direction of the book. No longer does having sex while being single bother Suzanne, she simply ‘needs’ a spirituality that can build her up (she originally suffered from low self esteem) and help her reach her goals. This desire to fulfill her dreams through the use of her spirituality leads her to change her attitude, her dress, hair (from wigs to natural) and diet (vegetarian-fruitarian) while maintaining what seems like a normal life – she has ambitions, she writes, looks after her children (when she’s not sneaking off in the middle of the night for trysts) and happens to have and enjoy sex with her boyfriend.

With such a strong focus on Suzanne discovering at the ripe old age of 28 that black West Indians originally hailed from Africa, I feel the book should hype more about the protagonist’s discovery of her African heritage and how that shapes her, rather than her relationship with ‘god’ and sex. Because again that’s the crux of the storyline – West Indian girl fleetingly guilty about sex rejects ‘white’ ideology / religion and goes back to her ‘roots’ in every sense of the word – hair, spiritualism, diet and lots of animalistic sex. As a creative myself, I did find it hard, however, to believe how a London-based West Indian writer/poet, which Suzanne is in the book managed to reach her late twenties with no previous knowledge of the slave trade and her ancestry…did she not read, I’d asked myself.

In short, the author’s ‘truth’ that she wishes to share with her black only audience is that organized religion was designed by white supremacists to keep Africans (the universe’s original beings) enslaved, emasculating them of their natural powers to dominate the world. Even the Melanin in our skin, we are told through the pages of this book is part of the power we Africans hold over the universe. And as an aside, Africans, or descendants of Africans can also use our natural sexual urges to transcend the black female and black male into another, powerful dimension.  For example, did you know that our Yoni (also known as our vagina) has its own solar system? Nice ideologies, but even as a well-read African woman who’s stumbled across some of these beliefs before, I struggle to buy into the conspiracy theories presented in this book as the ‘truth’. Furthermore, as an African, I found the author stereotyped what and who the African was and our spirituality (or as she defines on p198, Spirit Rituals). It must be remembered that there are more than 50 different countries within Africa and hundreds of varying tribes among us, with unique traditions. Certainly the African heritage described in this book was not one I belong to or really recognised. But ah well, I do relax my hair, have been known to sport a weave and still attend church…I’m simply not the type of African the author imagines.

Maybe it would have been too predictable, but I fully expected the protagonist Suzanne and her soul mate Charles to escape the ‘system’ created by the White Man (to perpetually enslave the Black Man) and relocate to Africa. Yet, ironically it was in fact a non-African invention (money and a desire of it) that kick-started this spiritual journey for the protagonist in the first place. Not only do the main characters’ accumulate wealth and lots of it, they end up choosing to live in posh White suburbia. The characters only real experience of Africa is a holiday for two (followed by a wedding) in Egypt, staying at a man made luxury resort and signing up for the age-old tourist trail of pyramids, the sphinx and souvenir shopping. Suzanne even experiences a spiritual ‘download’ in one of the pyramids – as if finally receiving her ancestral blessings, before a prompt return to their seven bedroom home on the outskirts of London.

I did appreciate the many poems in the book and I praise the author for them. She does indeed have a talent for poetry and I commend her for including these. The artwork featured was also inspired as was the phenomenal descriptions of sex between the protagonist and her lovers. You really see the author’s talents as a writer show when she’s describing the sex Suzanne and her lovers enjoyed.

Through the marketing (blurb) and the foreword the reader is purposefully misled to believe that this book is about spirituality in a Christian sense, in order to encourage the reader to buy the book I presume. When in reality, as many of us already know, spirituality takes many forms; it’s really only Christianity and off-shoots of Christianity that forbid sex before marriage. Therefore, is it possible to be single, spiritual and sexual? In short, of course…so long as (according to this book) you’re of African descent and don’t follow organized religion.

Cezanne Poetess responds to the review

Wow!  Although I don’t think it would necessarily help with book sales I DO appreciate the reviewer’s points of view.
This is the first review I’ve received like this (you can read others on the Review page at www.singlespiritualandsexual.com)
It makes me wonder how many other readers felt that way.
My original intention was to write a Black Erotica novel (I wrote the sex scenes first!) however I consider my Self a channel for the Creator to create through and as I was writing, the book took on a life of its own.  That’s what happens with inspired writing.  I now believe that the sex was only used to keep the reader’s interest in order to impart the other knowledge.
Sex is the best gift given to us by God, and religion has been used to suppress our sexual energy which I learnt through the process of writing this book, can be used to create many things, not just babies.
The message this book seeks to bring is that we as Black people, have the power to co-create through Sex Rituals.  I woke up in the middle of the night and wrote the scene where they performed their first sex ritual.  It was only when I was flipping through my pad a few days later that I saw it and I knew it had to be included.
I’m not sure how common performing sex rituals is in Africa but I do know much of it has been Colonized,  and therefore many ancient practices have been given up for a false sense of spirituality.

Call to Action: Everyone has a right to be

How Sex Helps Me Live With Disability

7 comments On Book Review of ‘Single, Spiritual AND Sexual’ by Ms A