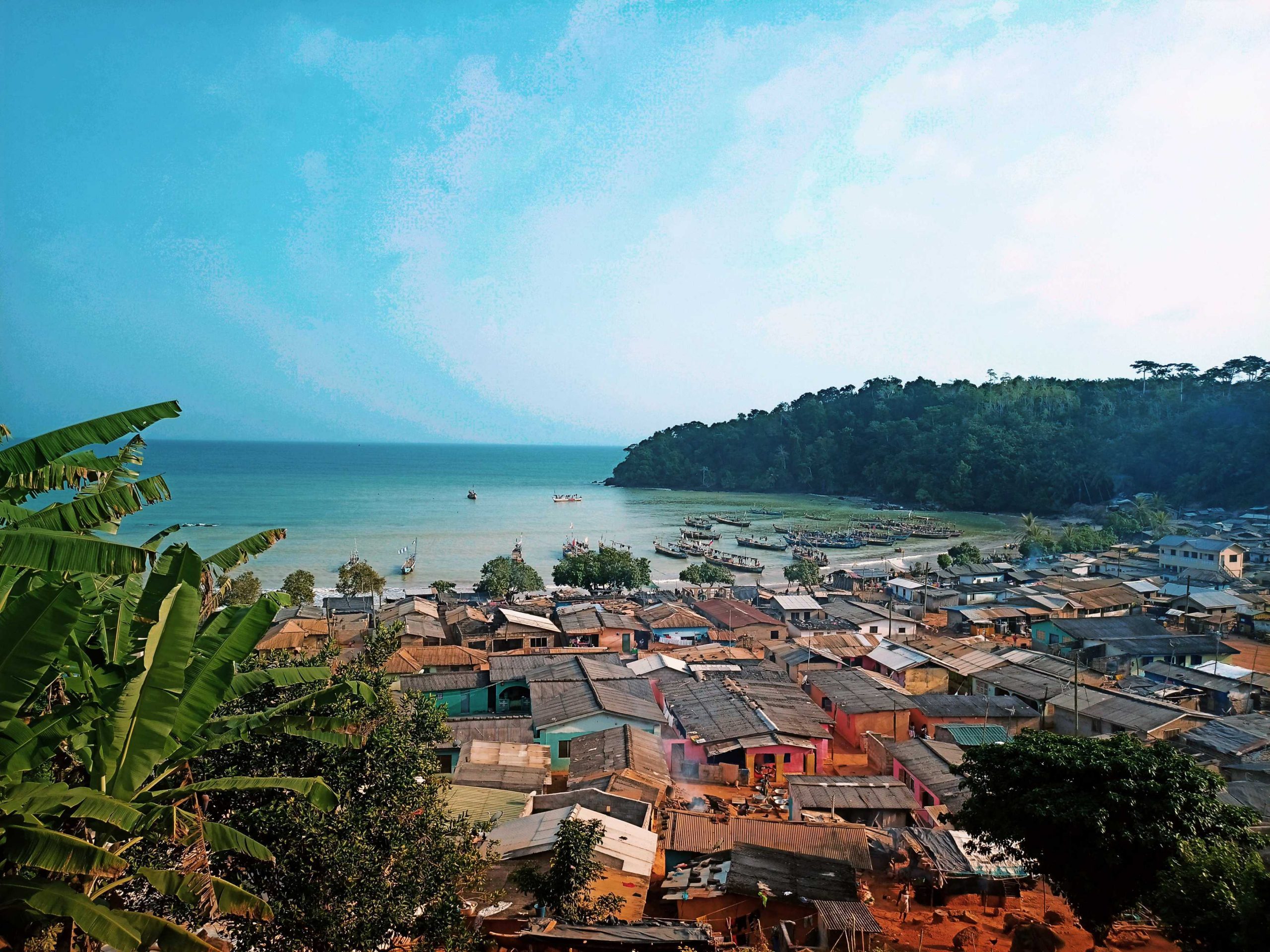 *I sneaked into Yaw Obeng’s room at sunset. I knew that no one would be expecting me home for a couple of hours because I usually spent some time by the riverside every evening just to clear my head. I also knew that there would be no one in his hut at that time of the day. He lived alone although his younger sister came to help him sweep the hut and clean it from time to time.

I had prepared for whatever would ensue. I had wrapped myself with a green cloth that I had which everyone said made my skin look like mahogany. I had tied the shiniest headscarf around my head and oiled my skin with nkuto shea butter till it gleamed. I had sprinkled some talcum powder which smelled like lavender on my underarms and between my thighs. The talcum powder was one of the numerous gifts that Yaw had given me from his shop.

When I got to Yaw’s hut, I gently pushed aside the piece of adinkra cloth that covered the entrance and entered. The room was quite dim because the windows were covered with cloths which had not been pulled aside. I could see Yaw lying on the mat in the room so I moved closer with my heart thumping. “My love”, I said,”I came here to surpr–“. I stopped mid-sentence as the person lying on the mat turned and I saw to my horror that it was not Yaw! It was actually a woman lying on the mat almost half naked. Her lower half was barely covered with a piece of cloth and her breasts were exposed. Her legs were splayed and I could see her waist beads peeking out of the cloth. It took some minutes for me to make out that it was Yaa Biriwa. Yaa Biriwa whom I considered my friend. I started recollecting how she would smile so widely and tease me everytime Yaw came to my house and she was also around. Whenever I showed her a present Yaw bought for me, she would tell me ‘Eii Araba, you are truly a lucky woman! Look at all these gifts that your lover is bringing you. Hmm, as for this your man, we will share him o! I will also marry him me ware no bi!” I would throw back my head and laugh, naively thinking that she was saying all these things in jest. Little did I know that Yaa was indeed very serious about marrying Yaw.

“Yaa, what are you doing here?” I asked her my voice tinged with shock and my body going numb . “Mcheww, what do you mean by what am I doing here? What are you also doing here? Is Yaw your husband and even if he was your husband is he yours alone to keep? Don’t come and disturb my ears with stupid questions this hot evening”. I turned away and fled from the room with tears stinging my eyes. As I was making my way out of the hut, I saw Yaw in a distance. He was coming home. He looked terrified when he saw me emerging from his hut.  “Good evening Yaw” I greeted him coldly. “Araba, I-I-I didn’t know you were coming to see me? Wha- Why didn’t you tell me you wanted to see me I was…”. “I’m sorry I didn’t tell you. Anyway, I have to hurry home to help my auntie cook supper. I was just passing by” I said as I walked away. He couldn’t even call me back. He just stood there looking at me, his whole body marked with guilt.

For the next few weeks, I totally ignored Yaw. When I met him in town, I’d mutter a cursory ‘hello’ and then walk past him. I refused to accept any gift he sent me through  his younger siblings and returned them all promptly. He came to my house so many times and I turned him away each time. My aunties started asking me to forgive him. They said ‘Ah, Araba, you’re much too stubborn! The man wasn’t even married to you and yet look at how he’s apologizing. Even if he was married to you, is he not a man? Is he not entitled to take on as many wives and concubines as his cutlass can take care of? Why are you being so jealous? Stop disgracing the women in our family and making it look like we are selfish and we cannot share. Why should you as a woman have the mindset that you want your man to be for you alone? This is pure wickedness!’. I would say “My mothers, thank you  very much for the advice. I know that I don’t want to share my husband with several women and that is why I don’t want to marry a womanizer. The other women can have him. Money is not everything’.  This would make them incensed & they’d go on and on ranting and raving about how I was wasting my chance, how I was being too rigid etc. I was set in my ways and determined not to see Yaw again.

But my determination broke down the day that Yaw followed me to the riverside. He looked so different from the last time I had seen him. He looked haggard, he had lost so much weight and his eyes were blood shot. “Araba, I’ll understand it if you never want to see me again but I beg you please, forgive me. I promise that I will never look at another woman again” tears started streaming down his face. “What I did was really stupid and unforgivable. I should never have done that to you and I know that I have caused you a lot of pain. I don’t know why I did that. I only know that I didn’t want to touch you before I paid your bride price and disappoint your father. You know how religious he has become since he joined that new Pentecost church in our hometown. I should never have even looked at your friend Araba. She showed interest in me and I was so foolish to also follow her instead of thinking about you. Araba, I’m on my knees and begging you. Please, just give me another chance”. I took one look at him kneeling on the hard rocks, tears streaming down his face. He looked like a little boy who had offended his mother and seriously wanted to make amends.

I decided to give him a second chance. How could I not give him a second chance? Yaw, was the first love of my life & I don’t think I have loved any man the way I loved him. We were married less than 3 months later. It was a very low key event. As you know, in Fanti custom, the bride  need not be present for her wedding and indeed neither does the groom as marriage is considered as the union of families and not merely the union of individuals. Yaw’s uncles and father went to see my people, my father, uncle, mother and my elders. Yaw’s people took my head drink, comprising of bottles of schnapps and then my bride-price, comprising of some gold dust, to my family. Yaw’s generosity was so evident during the ceremony. My family members gasped as children from his family carried in several cartons of drinks, pieces of wax cloth imported from Holland, several pieces of gold jewelry, expensive soap, talcum powder and  perfume. Additionally, the amount of Ghana shillings that he gave to my father and mother to thank them for raising me well and to my brothers as their akonta sekan or ‘sword’ to thank them for protecting me was unsurpassed in our village at that time. In fact, I’m sure that probably only the chief and a handful of other rich men had ever paid that amount for their brides.

After the wedding ceremony, I moved into Yaw’s hut. Yaw was a really understanding and gentle husband. He was such a gentle lover and so patient with me on our wedding night that I don’t even recollect feeling much pain although it was my first time with a man. I had heard horror stories of how some brides would end up bleeding terribly because their husbands were so rough and demanded  sex all the time. On the other hand, I heard stories of some terror inducing brides as well! There was this woman in our village about whom it was rumored that she refused to allow her husband to have sex with her unless he carried her on his back and crawled on the floor like a horse. Hahahaa!

I was so elated to be married to Yaw. I had desired this for such a long time and now that my dream had finally come true, I hoped that it would last forever. But dreams are never meant to stay forever….

*As narrated to Ekuba by her grandmother. Names and minor events have been changed

20 comments On A dream come true