In Lover of Her Sole, SeriesPublish DateJanuary 11, 2014 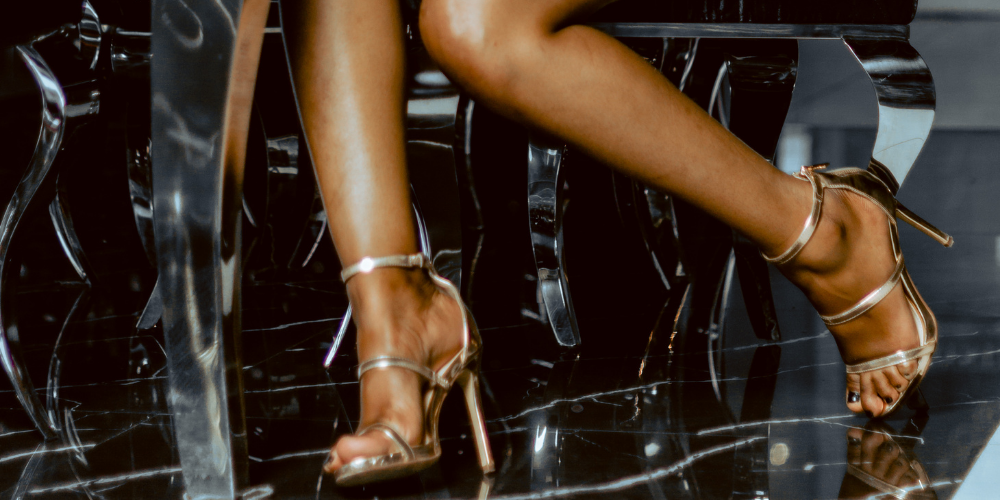 Yes. I’ll be there in fifteen minutes.

Good. Don’t be late. I’m anxious to see you. Meet me in the center of the gardens.

Me too. See you soon!

Pomaa’s heart rammed against her ribcage as she slipped her phone back into her purse. After three years, even a simple text from Femi set her soul alight. He was so thoughtful, so mysterious. No day with Femi was ever like the next. How had Monifa Okoye managed to raise such a son? Pomaa decided this had nothing to do with his mother. Femi was wonderful all on his own. Everything about him was perfection; from the soft afro that adorned his head, to the plump lips that grazed her own, even down to the ebony ankles he sometimes forgot to lotion. As far as Pomaa was concerned, his faults were flawless! She slung her bag over her shoulder in a hurry, not wanting to keep him waiting a single second.

“Frema, I have to go and meet Femi for lunch,” she said apologetically. “Will you and my mother be okay here?”

Frema waved her hand to shoo Pomaa off.

“Of course we’ll be okay. We have ice-cream. And when we are done, we’ll go back to the hotel.”

“Great. And it should only cost you 150 naira to get from here to the hotel,” Pomaa warned. “Here’s some money. Don’t let the taxi driver cheat you!”

Ernestina gave Pomaa a lop-sided smile. She had been in Nigerian for too long. Had she forgotten the sort of girl Frema was? Her childhood friend was quick to remind her.

“Ho. Ashanti girl like me? I won’t let anybody cheat me! Kumasi is a proper city. This your Ibadan is a big village. We’ll even go to the hotel for 20 naira, you wait!”

Pomaa cackled and waved goodbye as she slid into the driver’s seat. Having Frema in town was such a treat – just like old times. There were few people in her life she could count on, and Frema had always been the most steadfast of them all. She always told Pomaa the uncompromising truth: when she was being crazy, cruel, impetuous, over-zealous…all the things you never want to hear. To know that she approved of Femi meant a lot to her. She was, after all, more finicky about the men she dated than her own mother was. Mrs. Agyemang would be pleased with any offer of marriage that Pomaa received. How many times had she heard the woman recite the same prayer to God to let her live to see her only daughter married? She could quote the prayer, verse for verse. Ebei!

Pomaa stepped on the gas and turned up the radio, grinning at her private thoughts. She felt like a modern day princess dashing off to meet her prince. Was it possible to be so in love with one person? She felt like her heart might burst. Everyone suspected that Femi’s fortune might have to do with her intense feelings, but she couldn’t care less. He was not flashy with his money at all. She had never known how much he earned until long after they began dating, and even then it was a discovery she had made by mistake. No; what attracted her most was his creativity. Now, on the eve of their wedding, he had summoned her to Agodi Gardens for a final surprise. What could it be?

She took a deep breath as Femi rose from the simple white blanket adorned with rose petals and baby’s breaths. There was a basket nearby, no doubt filled with fresh fruit and wine, her favorite. She hoped there would be chocolate – you know, the kind they sold at Chocolat Royal in Lagos? Ohhh, now that would be tasty…

Femi’s hand on her cheek brought her into the present.

“Pomaa? You’re miles away! What are you thinking of?”

“Nothing darling,” she laughed. “I was just thinking about how beautiful everything is. I can’t believe you went to so much trouble for me.”

Femi frowned and pulled Pomaa close to him. Her words must have made him feel sad. She hadn’t meant to make him feel sad! She nuzzled her nose into the hollow part of his shoulder and breathed in deeply. He smelled like fresh rain in harmattan: rare and refreshing…and yes. Rich.

“Come and sit by me,” he ordered gently. “I want to remember our last day together as singles.”

Pomaa happily obliged and set about serving him. Yes he wanted wine, no he did not want cheese, and yes he had bought the chocolates for her.

“Do you remember when we first met, Pomaa?”

She dug her chin into her chest and chuckled. How could she forget?

“You mistook me for one of the wait staff at the university! How rude of you!”

“Well, you can hardly blame me. You had this god-awful habit of wearing only black and white, just like a waitress.”

Pomaa nibbled at his ear and giggled softly.

“That was because I was waiting on you to bring color into my life,” she teased. “Don’t I look a peacock today? See my turquoise shoes!”

She lay on her back and swiveled her satin pumps in the air. Femi wasn’t laughing with her. Her silliness normally got a snort out of him. What was wrong?

“Pomaa, I want to remember everything…please. Tell me, from your perspective, how did we fall in love?”

Pomaa took a sip of wine and stared out at the lush forest, recalling their romance. She instructed him to listen to the sound of the forest around them. A monkey hooted in the distance. Its troop responded. There was a thrashing of leaves, and then silence. That’s the way they fell in love.

“Are you really comparing us to monkeys, Agyapomaa?”

“Don’t be daft, Femi! I’m just saying every time I’ve needed you, you’ve always responded. With no hesitations. I hope you feel the same way about me.”

“You know you are so special to me, Pomaa. So very precious,” Femi was choking as he took both her hands in his, kissing her fingers separately. “I knew from the moment I met you that you were strong, and resilient. You knew your own mind. Remember when you first came to Ibadan for work? You were like a lost little kitten. I wanted to keep you like that always. I wanted you to depend on me. I knew you were exactly the type of woman I wanted by my side.”

Pomaa lifted his face with her right hand.

“And I will be, Femi. I’ll be the best wife you could have ever hoped for!”

Before the words had registered, the glittering diamond which had once adorned her ring finger was in the palm of Femi’s hand. He slipped it into his trouser pocket and looked away. A flood of obscenities poured out of Pomaa mouth.

“I see…and are we fucking our mothers now?” she raged. Femi shot her a dirty look. “No, really! So what was last night? Some sort of ‘for the last’ shag? Huh! Answer me!”

Femi gripped her by the shoulders and tried to pull Pomaa close to him. She fought him off, breaking a nail in the process. Shit! Now her manicure was ruined. Oh wait…it didn’t matter, because she wasn’t getting married in the morning! She slapped him. Hard. Femi hardly seemed fazed. In fact, he seemed very calm.

“This is why I brought you out here, Pomaa,” he said. His voice was so steady. Annoyingly so. “So that we could get it all out. So that you could cry on me and tell me everything that’s on your heart.”

“You brought me into the bush to cry on you? You? Why would I do that? Why would I cry on you?!” Pomaa gathered her keys and reached for her bag. Had it always been that shade of red? No. The saltiness of her tears made it look odd. “You just didn’t want to make a scene in town. You are a coward, Femi! Shame unto you!”

The childlike insult was all she could muster at the moment. She felt like a wounded kindergartner. She really thought she could endure anything Madame Okoye threw at her…but this was unthinkable! Suddenly, she thought of her own mother. What about all their guests?

“And what are we supposed to tell all the people we’ve invited to the wedding? Huh?”

Pomaa reached into her bag to look for a handkerchief. Someone’s phone was buzzing. She angrily reached for her device and stared at the screen. It was a group text message from Madame Okoye. Femi refused to meet her glare.

“That will be Mama, telling the guests that the wedding is off…”

Pomaa caught a sob in her throat. The humiliation! There were so many thoughts jostling for escape in her head. She wanted to scream that his mother was a bitch, and the he was the son of a bitch! She wanted God to curse them both. She wanted to tell him that he hoped he had five hermaphrodite Yoruba sons with scabies and perpetual loose bowels!

But she couldn’t. She loved him too much.

“I guess this is goodbye then, Femi. There isn’t much more to say, is there? You and your mother have it all worked out.”

A tightness in her throat threatened to suffocate her when Femi called for her.

“Don’t ever mention my name again.”

Her back was turned to him, ready to leave. She heard him scramble to his feet. Maybe this was it. Maybe he would change his mind! There was still time…

And then his cell phone rang.

Pomaa threw off her heels, blubbering as she raced towards her car. A troop of monkeys hooted in the dense foliage ahead of her.

Lover of Her Sole: A Ghanaian Cinderella Story

Please answer our poll on ‘Are you a person of faith’?

What it means to be bisexual

10 comments On The Precious