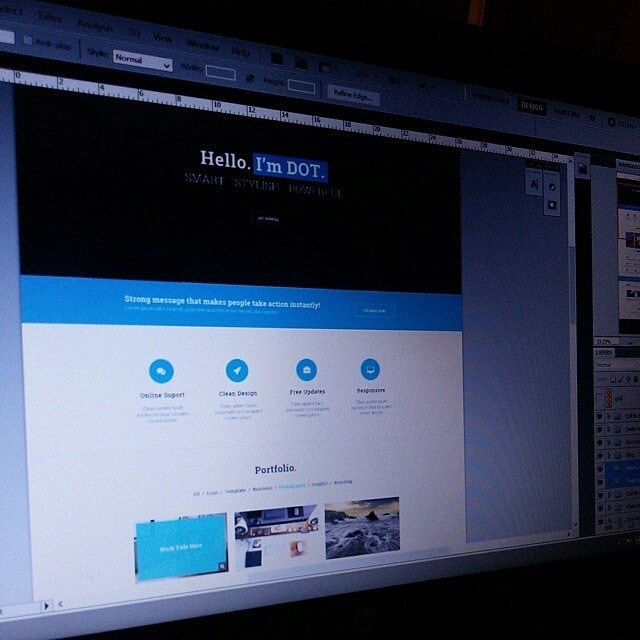 Our latest #envatostudiostories. Here is a shot of Studio freelancer @KonnstantinC workspace while he works on a project for a client. Check out his Studio portfolio of services here: http://studio.envato.com/users/KonnstantinC

Two months. It had been two months since Pomaa had taken on three of Uncle Ekow’s projects and seen them to completion. Pomaa still had not been paid for her labor. That was the funny thing about nepotism is that it’s infested with assumptions. Pomaa – and rightly so – assumed that she would be first in line to get to work on her uncle’s municipal projects. In turn, he had assumed that she would be doing the work for free or for the “benefit of experience”.

When Pomaa reminded him that she had just left a very profitable enterprise in Nigeria and that she had garnered all the “experience” she would ever need, he huffed and told him to leave an invoice with the secretary. The secretary would then send it to the budget department, who would then submit it to the finance department. After calling the office for days and getting no answer, Pomaa abandoned the chase. There was no point in frustrating herself any further.

Uncle Ekow had not been completely wrong, however. The endeavor gave her a chance to look at Kumasi in a way that she hadn’t done previously. Despite its famous alias, Kumasi was a city with no gardens…at least not enough to warrant such tranquil imaginations.

It was said the city had earned the name during a visit from Queen Elizabeth in 1961 when she referred to it as “the Garden City of West Africa.” The region was known for unique species of flora and natural beauty at every turn. The name stuck. The reason for it didn’t. Urban sprawl, industrialization and lack of planning had killed off all the greenery. Kumasi, like every other city in West Africa was now a concrete maze, devoid of any special horticultural touch.

Although Uncle Ekow was no longer the city’s mayor, he was still involved in politics. Pomaa had discovered so much about the city during her ride-alongs to talk to Ekow’s former constituents. She had organized a durbar for the sub-chiefs of the area, planned the commitment ceremony of a new borehole in one of the outlying villages, and was in the middle of executing a charity event for children when she realized she had not been paid for the first two projects. That was also when she saw it: The Children’s Park at Amakom. She realized its potential right away. If she played her cards right, she could be a part of revitalizing her city and develop a revenue stream in the same breath.

Pomaa closed her laptop after checking her online bank account once more. She could dare to hope, couldn’t she? There was still no money from Uncle Ekow’s department. She sighed and buoyed her attitude. Sulking wouldn’t get her anywhere. Besides, there was no one at home to put on a moody display for. Frederic was away on some errand, the house girl had gone to the market, and her parents were God-only-knew-where. Pomaa put her hand against her forehead when she thought of her parents – her mother in particular. Things had gotten better between them since the horrible skin bleaching advice incident, but there was still a chill in their relationship. The only way it was going to get better was if she moved out and gave them some space, and the only way to do that would be to get some money!

Suddenly determined, Pomaa strode towards her bedroom. She would have to change clothes in order to visit the park. Low heels, a structured skirt…something practical but pretty. She must pretend as though she was going on a client visit, and – ei. What was that noise coming from her bedroom? Frightened, a heightened awareness that she was defenseless and home alone washed over her. Had a wild animal broken into her room? How possible? She pushed her oak door slowly to the left with her foot. One of her father’s rolled up newspapers sat securely in her right hand, ready to beat anything – or anyone – in her room.

Frema held up her left hand, demanding silence. Her right hand was wrapped around the neck of some bare chested man, dovetailing his lips with her labia as he brought her closer from the cusp of an orgasm to its blissful completion. When she was done convulsing and shivering in delight, Frema let her hand drop to the bed and smiled contentedly at Pomaa. It wasn’t until the man dislodged his lips from between the other woman’s legs with a vulgar *smack!* and looked her way that Pomaa saw that it was Dennis.

“Dennis,” she said dryly, “you and I must really stop meeting this way.”

Dennis offered her a counterfeit look of contriteness and asked for the bathroom.

“It’s just through that door to your left, darling,” Frema purred. “Don’t stay too long!”

Pomaa stomped to the side of the bed and made to sit down before thinking the better of it. This Frema paaa!!

“You this Frema Gyasi paaa!” she hissed. “How could you have sex in my room…on my bed…in MY SHEETS!”

“Shhh!” Frema hissed back. “Dennis may hear you! I told him it was okay, that you would be cool about it?”

“Why would I be cool about it?” Pomaa was shocked beyond all belief. She had just changed those sheets that very morning! “And how did you get in my room anyway? I always keep the door locked.”

“Nigeria has fried your brain, sister. You gave me the key to your room years ago. You just don’t remember.” Frema bent her knees and tucked her chin into her chest. Clearly, she was riding the waves of a residual climax. Pomaa couldn’t help but feel a little jealous. She hadn’t enjoyed the pleasure of those sensations since she’d promised Auntie Dina that she wouldn’t have any more wet dreams. What a stupid promise! It’s not like God or Auntie D could read her thoughts…could they?

Frema was explaining her presence in Pomaa’s house.

“And besides, my parents are home, and yours are not. I couldn’t bring Dennis home and be with him in my room.”

“But Frema. It’s so disrespectful to have sex in my bed. Seriously.”

“What kind of a girl do you take me for, Agyapomaa?!” Frema thundered. “I would NEVER have sex in your bed! That’s why I only allowed Dennis to go down on me.”

Astonished, Pomaa decided not to pursue the conversation further. She walked to her closet and pulled out the items that she had come for and changed into them quickly. Aware that Dennis was probably waiting for the OK to reemerge from the bathroom, Pomaa called for him to come on out. She slipped her feet into a pair of turquoise,low-heeled Ferragamo pumps and reached for a matching clutch and clicked towards the door. She stopped and looked at the two people cuddled together on her bed, and was suddenly overcome by the scent of recent cunninlingus.

“I’m serious, Dennis,” she said before departing. “In the 2 months that you’ve been seeing my friend, I’ve seen your ass, the back of your head and your silhouette in the car. We really have to stop meeting like this!”

Dennis smiled, genuinely this time, and got up to shake Pomaa’s hand.

“I promise,” he replied earnestly. “You will see more of me…more decently in the future.”

Pomaa turned the handle on the door and walked out as Frema was muttering about only wanting to see Dennis indecently and asking if he was ready for the next round. The melody of zippers, gasps and giggles followed Pomaa out of the house. God, she needed her own place, and now!

Join our ‘Metamorphosis of Love’ hangout on Valentine’s Day

Advice Our Reader Ms H: To Cheat, Leave or …