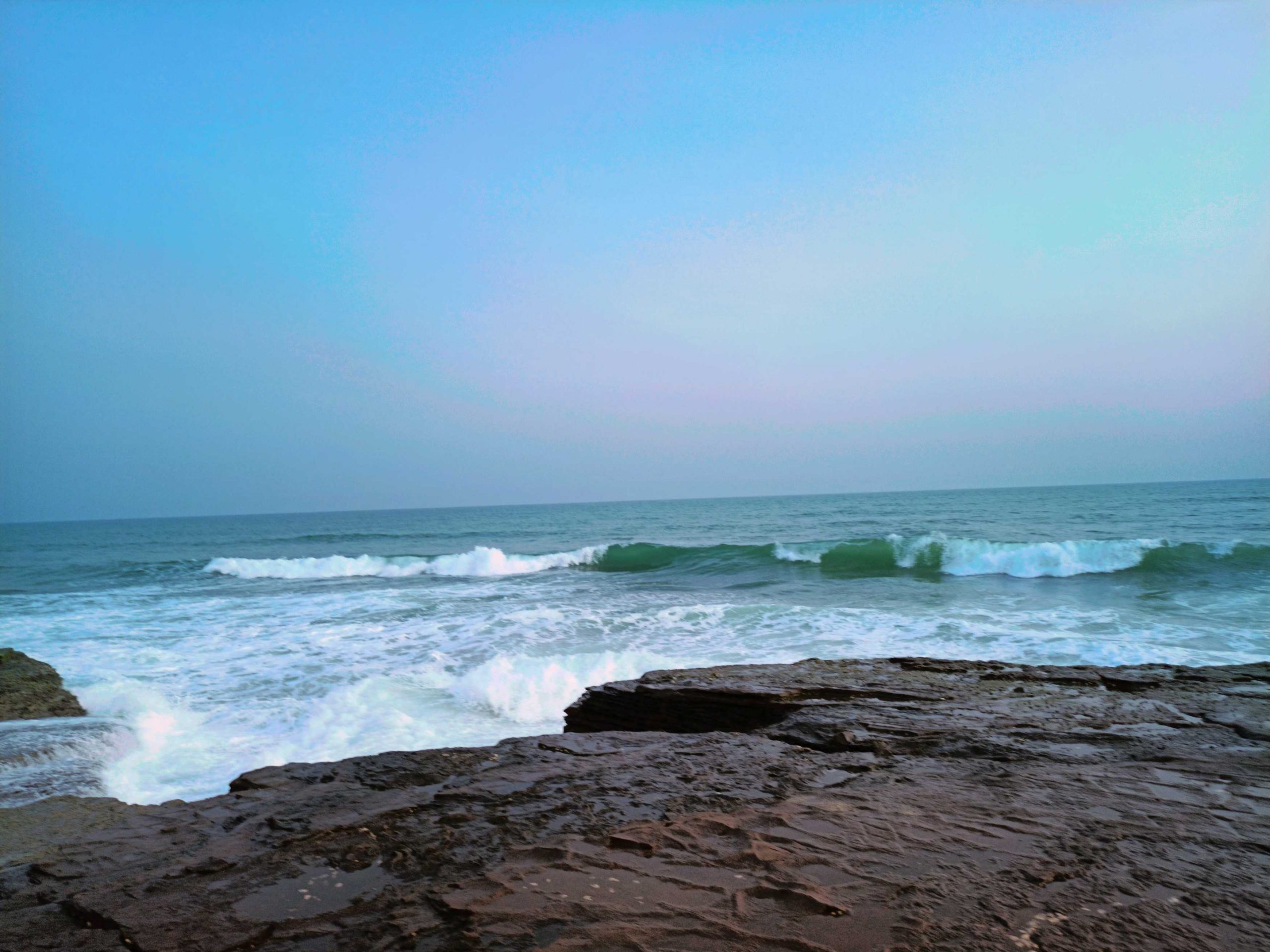 The scent of something sweet hung in the air and hugged her senses. Was that nutmeg? It was hard to tell. There were so many pleasant aromas jousting for dominance in the room that it was impossible to ignore them any further. Pomaa inhaled deeply, stretched her lithe, dark limbs, rubbed her temples and looked around. There was a plate of sliced mangoes on the side table next to her head, and something warm was curled around her feet.

Her toes were lodged in Akoto’s armpit.

Pomaa uncurled herself and sat up. Had he slept at all last night? His eyes were bloodshot red, staring at her intently and full of admiration. When Akoto saw that she had woken up completely, the corners of his lips morphed from a small smile into a full grin.

“Do you still like mangoes? I remember you mentioned once that you liked mangoes.”

Pomaa stared at the plate and then back at Akoto quizzically. She took a bite before asking,“How do you know I like mangoes?”

“You were always walking down the street eating them. I have to admit, I always envied one end of the mango in particular.”

“And what end would that be?”

“That’s for me to know,” Akoto winked, placing his feet on the floor to stretch. Pomaa made no move to obscure the fact that she was studying him. His torso, bare and the hue of a roasted kola nut, was shredded with muscles. He was still wearing his khaki trousers from the night before, although they hung low beneath his waist, revealing a pleasing V that led to the instrument cradled in cotton fabric. As she recalled the night before, she choked on a bit of mango and coughed uncontrollably.

Akoto reached behind her and patted her back furiously.

“Yes. Much. Thank you. How did you sleep last night?” she asked, changing the subject. She wanted to focus on him for a change.

“Not very well,” he said darkly.

Pomaa choked her denial, expelling bits of yellow mango flesh from her lips in the process.

“It’s okay!” Akoto laughed. “I’ve been told I snore too. Although you wouldn’t know that, given how loud the symphony you were putting on last night was.”

It was too early to find something suitable to tease him about. Her mind was still in a fog from the intimacy they’d shared just hours before, and any intelligent rebuttal was caged in the memory of the kisses Akoto had bathed her in. But she was an Ashanti woman, and that meant she couldn’t give ground without a fight. Pomaa grabbed a slice of mango, inched closer to Akoto, and maliciously rubbed it in his face. He didn’t resist, making rough slurping sounds in the face of the onslaught.

Pomaa ran a sticky finger down the front of his chest and let it linger around his belly button, inching it slowly downward. Akoto responded with a soft growl and leaned forward to claim her mouth in his. This is exactly the moment she had been waiting for.

“There’s no time for that,” she whispered, maintaining gentle pressure just above his pelvis, binding her breath with his. “I have to get my car and get home.”

“Sia* boy like you! Next time you won’t tell me I snore!” Pomaa snickered and reached for her handbag. “Come and walk with me to get a taxi… please?”

Akoto laughed and swung the door open for her. Of course he would accompany her. To her disappointment, a vacant taxi rumbled by as soon as they reached the corner of the street. Akoto flagged it down, negotiated a rate, paid the fare and placed Pomaa in the backseat. He kissed her gently on the forehead before tapping the roof of the car to send the driver off.

“Call me when you get home so that I know you’ve reached safely,” he instructed.

“You have a mobile phone?” she asked hopefully.

“Oh…Agypomaa. Of course I have a mobile,” he replied. His tone was sardonic. “I even have a data plan with a Facebook account too.”

Was he offended? It was hard to tell. There was still so much she didn’t know about Akoto. But the knowledge that he had a mobile  phone and wasn’t sending her paper messages via shoeshine boys because he was broke was a triumph. She eagerly punched in his number and promised to call him. She couldn’t wait to tell Frema. Akoto had a mobile phone!

As the gateman swung open the blue iron gates to her home, Pomaa’s heart sank into her belly. Three cars were in the courtyard and her father was on the veranda with a newspaper, peering into it as if it held the secrets of the universe. The Nhyiaeso Council had convened at her home again. Their presence so early on a weekday could only be attributed to one reason and one reason only: Frema. Pomaa sat in her car and closed her eyes. Maybe if she wished them away, they would all just disappear?

It was getting hot in the car, and she desperately wanted to wash the lingering, mingled scents of fresh mango and man flesh off her body. It was no use. The Council would not leave until they had spoken their piece.

“Ei; Agyapomaa. So you decided to come home, eh?”

Her father remained cloaked behind the newspaper as he spoke. Was it that bad, she wondered aloud? Worse, he replied. He’d never seen the Council in such a state.

“You’d better go on and get it over with,” he advised, rustling the sports section of the Graphic.

“Daddy…why don’t you ever come in and defend me?” she asked. Her voice cracked under the weight of her entreaty. “I feel so defenseless against them. They are a vicious gang, Daddy!”

John Agyemang shifted his newspaper to the side and looked at his adult daughter long and hard. For a long time, he said nothing before offering wisdom he had learned over the years.

“When elephants are fighting, it is the grass that suffers, my dear. They will trample on you because they can.”

“What does that even mean, Daddy!” Pomaa hissed, exasperated. “Why are you speaking in riddles?”

Mr. Agyemang sucked his teeth and chuckled a little. All this education he had paid for and she couldn’t figure this out?

“My dear, before you enter that room, decide if you are going to be the elephant or the grass.”

He shuffled his paper and casually waved her into the house.

Elephant or grass…elephant or grass… Pomaa repeated the mantra and squared her shoulders as she entered the living room. A cabal of black warriors glared before erupting into an unholy din.

“Are you going to leave your father’s house to live in his one room container?”

“This is a disgrace!”

There. Auntie Sinticlaire had said it. It was a disgrace, a shame, a blight for her to even associate with Akoto. This was Ghana. You couldn’t argue with disgrace.

Pomaa sank onto the stool that had come to symbolize her shame year after year. In the cluster of voices, she became acutely aware that one was missing: her mother’s. Had Ernestina Agyemang nothing to say at all of this matter? Pomaa sought her mother’s gaze and found it was blank. In Auntie Dina’s eyes she saw doom. Aba’s were full of despair. Obaapa’s held contempt. And there in the corner, standing behind her judgmental mother was Frema. She refused to look Pomaa in the face.

“Of course you can’t see him anymore,” Auntie Obaapa was saying. “Think of your reputation. And you know you are working with my husband. He’s an important man!”

“Your husband hasn’t paid me in months, auntie.”

Pomaa felt a bit bolder. “I said ‘Your husband hasn’t paid me in months!’ And come to think of it, NONE of you women has financed any aspect of my life, ever. I don’t know why you all care so much. Did you born me? Don’t you have your own households to run?”

The sound of a man’s chuckle and retreating footsteps from the veranda told her she was on the right track. Feeling courageous, she laid in.  Who did these women think they were? Who appointed them the guardians of the virtue of the entire community? As if they didn’t have the ghosts of questionable men haunting each of their pasts. Did they know the sorts of things people said about them behind their backs?

“Trust me, you wouldn’t like it,” Pomaa whispered angrily. “I suppose that’s why you must all stick together. You’ve alienated half the city!”

Shocked silence hung in the air. Auntie Dina was the first to break it. She narrowed her eyes and willed her contempt to burgeon and blanket the younger woman who was there to receive her scorn, not give it.

“That may well be, little girl, but none of us here can be found guilty of sleeping with a man who cobbles scraps together for a living!”

Damn that woman. Sure, the insult had stung, but only a little. It was none of their business that neither Akoto nor she had a condom last night. So you see, Auntie Dina? Pomaa thought privately. I can’t be accused of that either.

Pomaa held the icy stare of each of her accusers until they left in huffs and wet sucking of teeth. Frema tried to slide past, but Pomaa was too quick. She grabbed her by the arm and dragged her to her bedroom.

“You’re not going anywhere. I need to talk to you!”

Did you miss our ‘Dating in An African City’ Hang Out?

Guest Contributor Ekuba’s Letter to the Other Woman