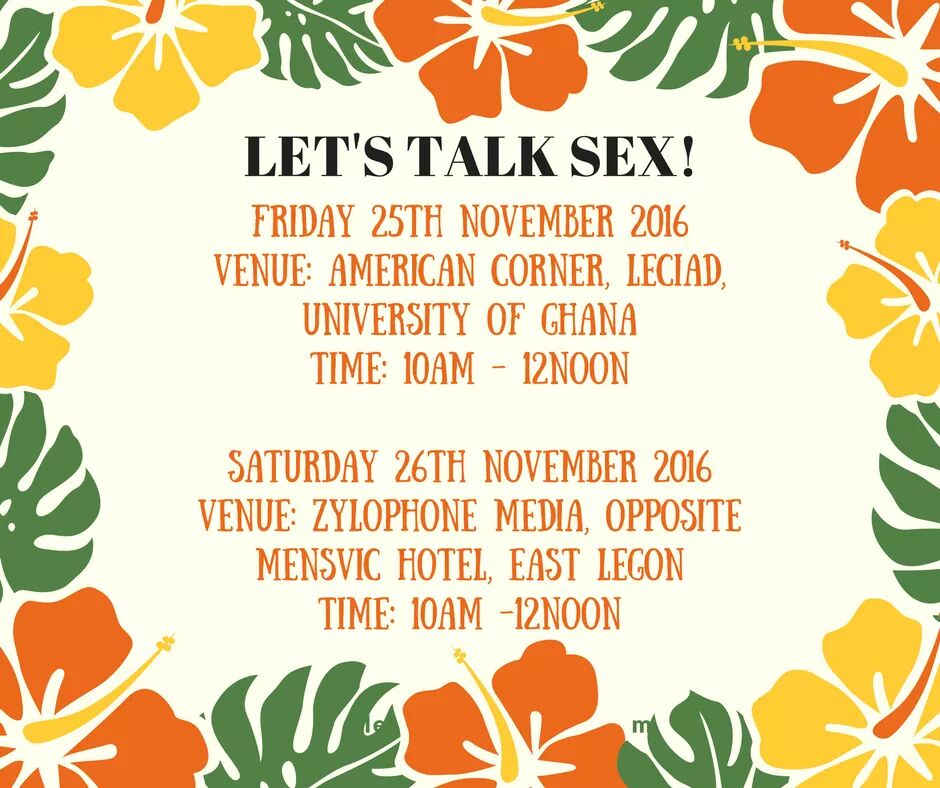 Frema picked at her plate and sighed, occasionally shooting Pomaa crestfallen glances through glassy eyes. The last time Pomaa had seen Frema this disconsolate was when Shabba Ranks had come to Ghana and Auntie Sinticlaire forbade her from going to the concert. When Frema refused to touch her Fever – a cocktail of akpeteshie, bissap and orange juice that she concocted herself – Pomaa knew that her friend wasn’t simply putting on a show for sympathy. “Getting a Fever” was one of Frema’s many excuses for loud, inappropriate public behavior. That she wasn’t even considering drinking it meant she was genuinely troubled!

Pomaa would have to find a way to make it up to her later. The dinner table was not the time to broach the topic of classism and where Akoto fit into the box that people like Frema, and even herself expected him to cram into. She turned her attention to Akoto and Dennis’ conversation which had gone from politics to football.

How boring. She nodded and smiled, feigning interest in teams she had never watched play. Chelsea, Manchester United. These people were Ghanaians. Why weren’t they blathering on about Accra Hearts of Oak? Wait. Did Akoto say he supported Bayern? Femi liked Bayern…

Damn it! Why did Femi always interrupt her thoughts at the most inconvenient times? She was on a date, with another man, who had made shoes for her for god’s sake! Certainly she owed him a bit more loyalty than this. It would have been nice to talk to Frema about her dilemma, but she was intent on ignoring her, busily making fork designs in the oil from her uneaten stew.

Dennis finally noticed she was sulking and put his hand on her thigh and rubbed it deeply.

“What’s wrong?” he asked, his eyes filled with genuine concern.

The intimate moment did not go unnoticed by Akoto and Pomaa who both suddenly managed to find fascination in their napkins.

“Nothing,” Frema sighed. “I’m just not feeling very well. I had some shocking news earlier.”

“Is that why you pulled Pomaa out earlier?” Akoto asked gently. “I’m so sorry. Is there anything we can help you with?”

Frema shot Akoto an icy, frozen glare before muttering a curt “no”. Pomaa gulped down the rest of her drink and motioned for the waiter to bring their bill.

“Dennis, perhaps you should take Frema home,” she said quickly. Frema never needed a drink to speak her mind. The fact that she had held her tongue this long was a miracle. “Thank you for coming out tonight.”

Dennis laughed congenially and took Pomaa’s hand to shake it. “It was a pleasure. I’m sorry we didn’t get to discuss business! I got so caught up in Akoto’s conversation. He has some very radical views!”

The very mention of Akoto’s name was enough to cause Frema to scramble to her feet. She tugged on Dennis’ free hand and begged him to go.

Frema looked over her shoulder casually before offering Pomaa a dry “Yeah. Later.”

And then they were gone.

“Frema was not in the best of moods tonight, was she?” Akoto chuckled.

“No. She wasn’t,” Pomaa sighed. She thanked the waiter and stuffed a wad of cedis into the black leather fold sitting between the pair of them like a judgment. Should she ask him to contribute? She had asked him out after all. Dennis hadn’t left a pesewa for his part of the meal, even though he’d had plenty of Hennessey to drink…

Akoto saw the wheels turning in Pomaa’s head. “I could help you with that,” he offered. “Let me – “

The sharp panic in her voice had not gone unnoticed, even by her. She softened her tone and smiled weakly.

“What I mean is I invited you out to dinner. You’re my guest…besides, what’s a bit of rice compared to the lovely sandals you brought me?”

The tension in Akoto’s shoulders eased a bit. She was so beautiful when she was being apologetic. Dare he touch her? He dared.

“I thought of you with every stitch,” he admitted. When Pomaa didn’t pull her hand away, he felt encouraged to speak on. “I imagined how lovely your skin would look against the green, and how you might arch your back to…walk. To walk in them.”

A sly smile spread over Pomaa’s lips. Walking was not the nearest thing to Akoto’s mind; that much was clear. But since he had brought it up, why not?

“Let’s go for a walk around the city in my new shoes!” she giggled. “The night is still young, and if anyone messes with us you’ll protect me, won’t you?”

Akoto smiled and clasped her hand in his. The warm contact excited him, aroused him to the point of no return. Grateful for the length of his dress shirt, he released the hold on her hand briefly and held the door open for her, allowing her to walk ahead. The blast of warm city air was enough to bring him back to center. He reclaimed her hand and touched it to his lips.

They walked like that for hours, commenting on the throbbing night life where beggars where miraculously healed of their afflictions and children ran rampant in the street long after dark. They dreamed of a time before their own.

What would you have been 300 years ago? Would you still be making shoes?

Probably. It’s my passion. Would you be an event planner?

They didn’t have event planners back then, silly boy. I would have been a servant in the royal family.

Never. They would have enstooled you, dripped you in the finest kente and gold and made you a queen…

Their slow, lazy amble had somehow brought them back to Akoto’s shop. The steep concrete steps which once frightened her now seemed familiar. She walked up them with ease, putting an extra sway in her hips with every step for Akoto’s benefit. He rushed around her and unlocked the door to his darkened workshop, placing his hand on the small of her back to guide her in. She inhaled the musky scent of oil, polish and turpentine. Then she coughed.

“I’ll open the window for you. It can be very overpowering when you first walk in,” he said apologetically.

Pomaa scanned the room. It was orderly. When she left her office she had at least twelve or more files stacked carelessly on her desk. Akoto, however, kept every object in its place. Something odd caught her attention from the corner of her eye. She stepped closer and pulled a purple party dress – a child’s garment – out of a plastic bag. Why did he have kids’ clothing in his store? Was he a father and didn’t tell her? Ewurade. He was! He was a father, and he was poor, and her family would never accept him. She looked at him questioningly.

Akoto took the lavender dress and stroked it between two fingers. “Isn’t it beautiful? I picked it up at the Central market just a few days ago.”

“Akoto, why are you wearing kids’ clothes,” Pomaa asked impatiently. “What is it you’re not telling me?”

He laughed and guided her over to a trunk, instructing her to open it. It was filled with tattered clothing: sequined gowns, men’s dress suits and children’s attire. She felt dread creep over her. He was crazy, wasn’t he? Mamadou’s craziness was infectious and he had caught it. Now something awful was going to happen.

“I take these old clothes and use them for the final touches on my shoes,” he explained quietly. “It can be very hard to get materials, so I go to kantmanto* and see what I can find. No two shoes are ever the same.”

“So the sandals you made for me were once what? A university girl’s clubbing dress?”

“No, it was actually a shirt,” Akoto laughed. “Maybe it belonged to a local politician. I can’t say.”

Relieved, Pomaa joined him in easy laughter. There was something sad, and strangely beautiful about taking something and turning it into something else. Didn’t he find it disturbing that he was using these objects in ways that they weren’t originally intended?

“But who’s to say what one thing or another is intended for, if not us, Agyapomaa? God gave us trees so that we could build tables and chairs. Why not take a shirt and turn it into a shoe?”

She closed the lid of the trunk and sat down, lost in her own thoughts. Akoto sat beside her, shocking her with the contact.

“There’s a lot of electricity between us, isn’t there?”

Pomaa looked at him beneath lowered eyelashes, knowing what her next words could lead to, knowing very well what might happen next.

“Do you care to see what else we can make between us?”

His lips answered her taunting question, claiming hers like sunken treasure. His tongue was a deep sea diver, exploring her mouth, tasting its sweetness, darting back for more. A low deep sound escaped Pomaa’s throat, a lament or an exultation she couldn’t tell which. Hot wetness was building between her thighs, a provocation she could no longer withstand. When she reached for Akoto’s buckle and felt his firmness straining against her palm, she forged ahead to release him.

But he stopped her.

“Agyapomaa… You have no idea how much I want to make love to you. But not here. Not on a metal trunk where something could poke you.”

What? What??? She stared at him, mouth agape. How could he take her to the well and then promptly refuse her a drink?

“But, I thought you were going to poke me.”

That didn’t come out right at all. See? Sexual starvation was turning her into an idiot! Was he laughing? He WAS laughing – or trying not to. He took her by the hand and showed her to the door.

“Come with me downstairs to my room. It’s far more comfortable there.”

‘The God of Sex’ by Guest Contributor Voluptuous Voltarian

16 Days of Activism Against Gender Based Violence: Share Your Stories of Survival

Mother Superior and I

6 comments On LOHS: But I WANT you to poke me!