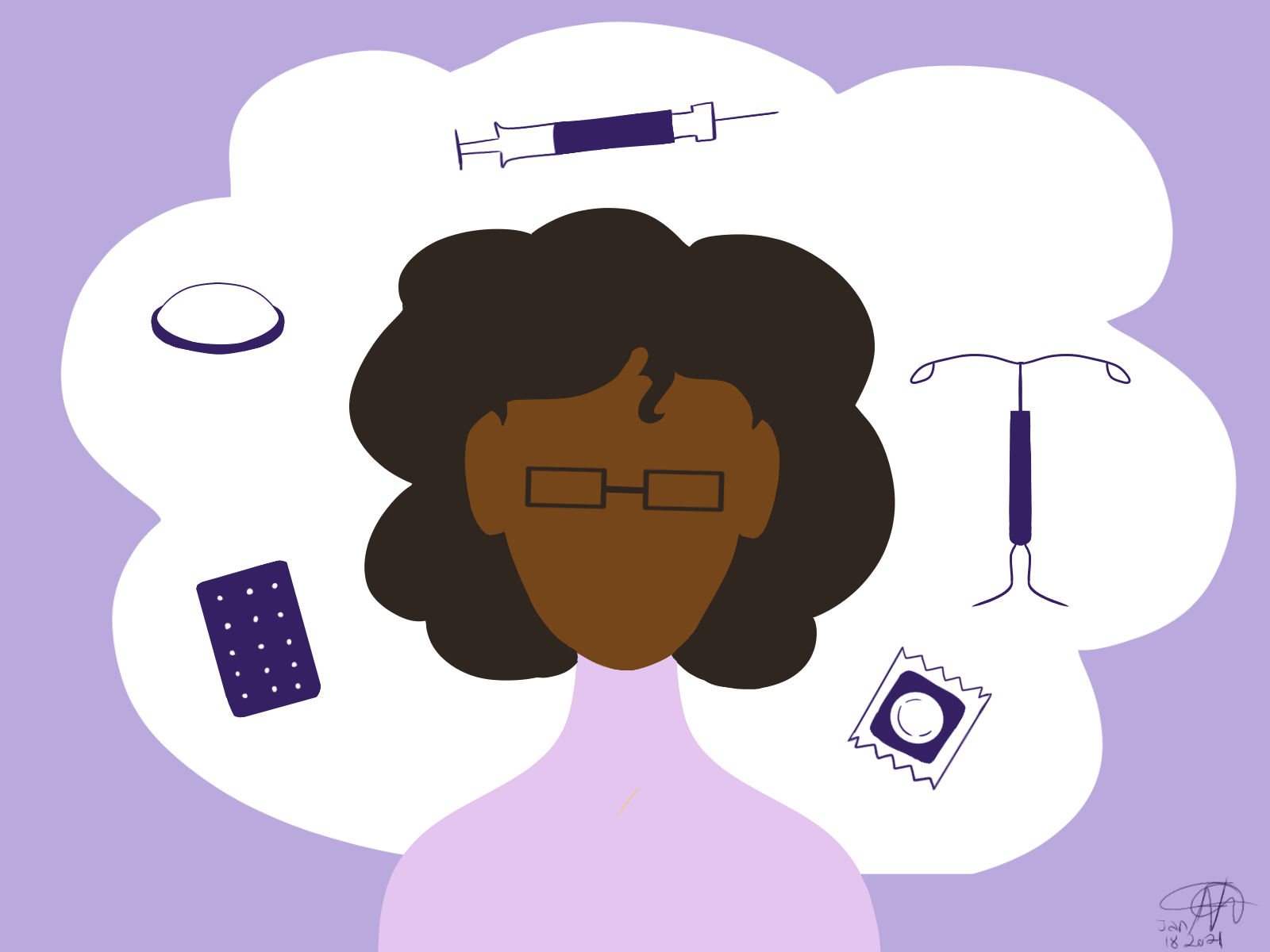 This article is a continuation of a story published here.

“I get a Hollywood wax every 3-4 months. In between that, I use Veet down there.”

That was my manicurist. She pointed towards her thighs with a nail file and then went back to restoring my cuticles.

“In fact, I’ve even gotten my boyfriend to Veet with me.”

“Yeah,” she laughed. “It’s quite nice. He enjoys having smooth balls now. Usually, we smoke a hookah in the bathroom and make an afternoon of it.”

I don’t know why people tell me these things, and I certainly don’t know how we got on the topic of this woman’s pubic grooming habits, but soon our conversation migrated to birth control – a topic that made her feel sad. Not because she didn’t believe in it; but because she was having such a hard time finding the right one for her.

“I had the implant for looong time.” Then she leaned in and whispered behind her mask and the plexiglass barrier between us. Was she about to tell me something more secretive/personal than her boyfriend’s bare balls? “You don’t want to know how much weight I gained! Now I’m taking the shot. I have one child – a boy. And I don’t want any more.”

“I hear you. I have four and I certainly don’t want any more!”

“You look good for having four kids.”

“Thanks,” I said. “But I know what you mean about the weight gain. I was on the pill for many years and I still haven’t lost all the weight.”

I didn’t share my bias against the shot with her. One of my best friends died in 2002 from complications with the birth control shot. Blood clots are one of the possible side effects, and she developed one in her brain. We watched her life slip away and felt her feet turn to ice when they took her off the ventilator. To say it was traumatic is an understatement. I shared none of this with Chantel*, but encouraged her to keep researching options that would help her reach her personal health and family planning goals. It was that conversation that sparked my interest in, and curiosity about IUDs, which I would later ask my healthcare provider about.

Why hadn’t Chantel considered an intrauterine devices (IUD), I wondered? Did she even know about them? Though they have been around since the time of the ancient Greeks, I myself had only become aware of the contemporary t-shaped version within the last 2-3 years. In conversations with other African women about birth control, I rarely hear IUDs mentioned. There’s a great deal about condoms (male and female), the Pill, the shot and postinor. Which – I should add – is emergency contraception, regularly misused in Ghana and is dangerously conflated with regular birth control.) I decided to investigate why this device was missing from African women’s arsenal of family planning/pregnancy prevention tools. What were our experiences like with this product? Here’s what some uterus owning people had to say:

OK… So not the feedback I was looking for, especially since I am considering getting an IUD for the exact opposite reasons (i.e. lighter/no periods), but these reports are consistent with much of the literature I found on IUD use among women of African descent.

WHAT IS THE APPEAL OF AN IUD?

IUDs are a type of long-acting reversible contraception (LARC). They are highly effective in preventing pregnancy. They last for several years and are easy to use. An annual checkup is recommended after insertion. They are a convenient form of “set and forget” birth control (BC).

ARE THERE OTHER BENEFITS BESIDES BC?

Yes. The Mirena IUD implantable contraceptive was found to be superior to oral contraceptives and non-hormonal drugs approved for the treatment of heavy menstrual bleeding in reducing the condition’s effect on quality of life. In some cases, it can eliminate menstrual bleeding, the potential of which TC and I were seduced by.

“The crazy part is that I’m queer and dating a woman so I wasn’t even trying to prevent pregnancy!” said TC, who just had her IUD removed this month. “It was just to get my periods back on schedule!”

Mirena has also been prescribed for women who are taking estrogen as their hormone replacement therapy.

WHO GETS PRESCRIBED AN IUD? THE RACE FACTOR

A fascinating study published by Tiffany Nicole Bell at Yale University reveals the impact of patient race and number of past sexual partners on clinical decisions to prescribe IUDs. She points to a recent study that showed low-income women found that Black women were significantly less likely than whites to receive the intrauterine device. Some studies have “proposed that providers might be less likely to offer certain effective contraceptive methods to minority women, due to their speculation that these women would increase their sexual risk-taking behavior (e.g. decrease their condom use, or increase the number of sexual occurrences and partners) and consequent risk for HIV and sexually transmitted infections (STIs) due to a perceived decrease in susceptibility to pregnancy with contraception.

These sentiments were echoed in a South Africa based study/trial that was terminated early due to “international concerns regarding a possible association between DMPA (injectable contraception) and HIV acquisition.”

Black women from low-income countries and/or social backgrounds are less likely to be candidates for IUDs. There is a direct line between the (perceived) class of the patient and access to this particular form of BC care.

WHAT ARE SOME OTHER FACTORS THAT AFFECT USE AMONG AFRICAN WOMEN?

Many women lack awareness of modern contraceptive methods, including IUDs. I only became aware of them in recent years. IUDs are not one of the more popularly advertised forms of BC.

Contributing to low-moderate IUD use is cost. As mentioned previously, it is a R2000 ($173) upfront tab for the device. That represents 10 days of wages for the average low skilled worker in South Africa. In the US, the cost is $2000, may be covered by ACA.

Access, availability and convenience play a role in utilization. As I discovered during my recent doctor’s visit, IUDs are not readily available. A prescription must be filled, taking anywhere from 1-6 days, requiring an additional scheduled doctor’s visit, preferably during the course of one’s period. Many women do not have the liberty or access to this kind of disposable time during the work week. Additionally, *data from UNFPA-Supplies surveys conducted in 17 Sub-Saharan African countries in 2015 show that 0–66% of facilities did not have the IUD in stock when surveyed, and 0–47% did not have the implant in stock (not shown); the medians were 26% and 19%, respectively. These data support the impression that shortages are more common for the IUD than for the implant.

Healthcare provider attitudes and skill have been shown to play a significant role in how (or if) the IUD gets administered. While injections can be delivered by lower-level paramedical staff, IUDs and other LARCs require the services of a trained OB/GYN, so as to minimize the potential for patient injury. As many women can attest to, provider’s personal morals and attitudes can (and frequently are) barriers to access of all types of BC, not just IUDs. While my doctor is very (maybe too?) passionate and encouraging on the subject, there have been many stories of women who have been refused access to care when age, class, religion, puritanical impositions, etc. on either side of the pharmaceutical counter come into play.

In conclusion, after researching and writing this article, I have chickened out of getting an IUD. I will just bleed until the day the Universe deems it no longer necessary that I do so. I AM curious if anyone has any positive experiences with an IUD? If so, I know I speak on behalf of the whole community if you would share that in the comments! …Or if you have horror stories you feel can top these three, that’s cool too. 🙂

‘Wanted: A Community of Vaginas’ by Guest Contributor Efua