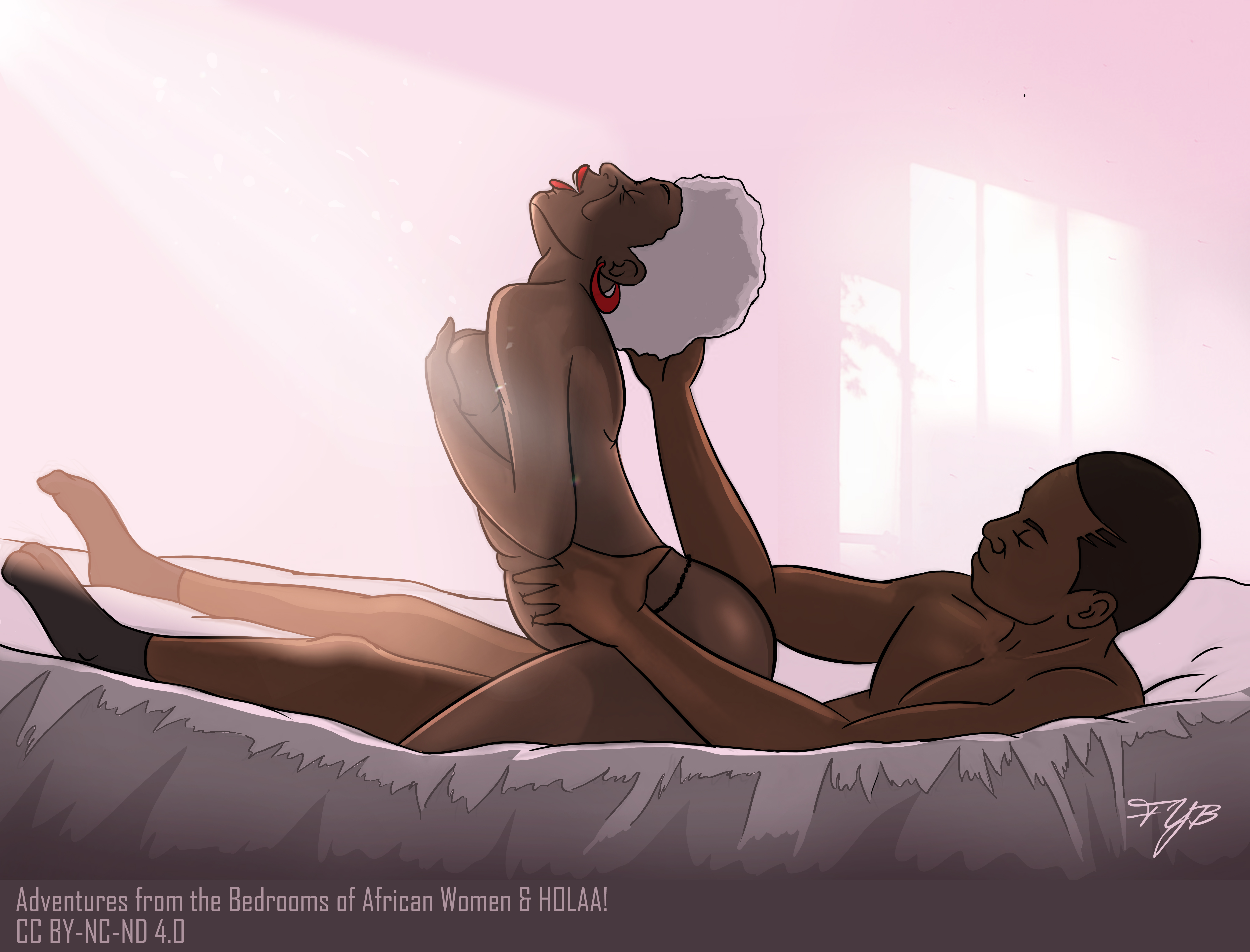 Illustration of an older woman and a younger man having sex in the reverse cowboy position. Art by FYB

I was only hired to drive one woman around. I rather found myself “driving” hard and deep into her sister. Let me tell you how…

It was a solemn day. Soon as the Prampram traffic was behind us, I picked up speed till the needle read 120km/h and decided to coast at that velocity. My boss, Ms. Evelyn Danku sat in the back looking out the window, clad in all black with her black-rimmed sunglasses.

Her father had passed two months prior. I often couldn’t tell what she was going through, but I admired how she kept it together.

Allow me to give some history. I’d been driving Ms. Danku for over a year. I’d heard her telling my older cousin Martha about functioning on a higher level and needing to make the best use of her time within the work hours she had allocated herself. She therefore saw the need for a chauffeur to be able to use transit times to prepare for meetings and presentations as well as continue her work in commute during the rush hour.

I told Martha I’d love to drive Ms. Danku. I had just graduated at the time and spent my days working out and gaming. Martha wasn’t thrilled about the girls who’d come visit me in the evenings and thought the work arrangement would take me away from them. Truth is I’d been crushing on Ms. Danku since she first came to visit Martha during their high school vacations. There was a quiet allure to her. Her smile had soul, plus her physique and proportions stirred something in me in a way I’d never felt before.

She was considerably older and way out of my league. She was good to me and treated me like a friend when we were not in formal spaces. She occasionally teased me about the girls who came to my quarters and it crossed my mind a few times if she cared about me enough for it to bother her. I know. Silly me huh.

Not to brag or anything but the girls came for one of three things which I knew I had going for me – a physique that had people doing a double take (thanks to intense gym sessions with some gym rats I met after high school), a pretty impressive “package” which opened doors of sexual adventures while in University, and my ability to hold great conversations.

And now here I was, driving her on such a difficult day. We arrived in the village and at her family house. Ms. Danku informed me then that we were picking up her sister and heading to a guesthouse close by. Sister? She hadn’t spoken of a sister in the time I’d come to know her.

After settling into the guesthouse I was asked to run errands with Ms. Danku’s sister in preparation for the funeral the next day.

She was a sight to behold. A filled-out pageant figure with a certain confident air. She took the front passenger seat and uttered an emotionless hello.

After a few minutes driving through the countryside, I introduced myself. She mentioned her name, Ophelia. It was difficult under the circumstances to strike a conversation. I inserted a pod into my left ear and searched through my playlist and settled on alternative rock from the 90’s.

She knew all the songs and we spoke about our uncommon love for alternative music. Soon we were chatting like old friends. I looked at her and I became curious. Ophelia, Ms. Danku’s sister.

Beyond a football park was a stretched shed where ladies cooked in preparation for the funeral. I watched Ophelia walk from shed to shed. I felt that unfamiliar shift in my gut. Stronger this time.

She soon returned and tapped on the passenger side glass. I rolled it down and she bent over to ask what I’d have for lunch from the options available.  I found myself initially staring at her cleavage and then willing myself to look her in the face but found myself staring at her lips. She noticed, but said nothing.

The funeral had gone solemnly. The sisters had held it together till the reading of the tribute. I found myself wanting to hug them both.

At the cemetery Ms. Danku stood next to a Suave looking man. From the way he was comfortable in her space I deduced that he was more than a friend.

I stood next to Ophelia. As the casket was lowered she began to sob uncontrollably. My heart went out to her and I cautiously put an arm around her shoulder.  She leaned her head on mine and cried. Suddenly I felt her legs buckle and reflexively turned to hold her in an embrace. I felt her arms across the expanse of my back. She held me close and sobbed into my neck.

I became acutely aware that her body was on me and in spite of myself my member responded by getting engorged. I began to pull away but she held me close. She loosened her grip when she felt the bulge against her. She looked at me and I embarrassingly excused myself.

That evening, there was a knock on my door. I realized that I was hoping it would be Ophelia but it was Ms. Danku, coming to inform me that she was stepping out with her companion and would return to Accra with him. She smiled sheepishly.  I felt an inexplicable pang of jealousy which was confusing because not long before this I’d been hoping to see Ophelia at the door.

Twenty minutes later – another knock on my door and in walked Ophelia. I found my voice and begun to apologize for earlier.

She only burst out laughing and thanked me for being there.

She threw her arms around me and lingered. Like magic my member began to rise and I attempted to pull away. Ophelia looked up into my face at that moment and kissed me. I pulled her in tighter and got our tongues in a fierce and hot duel.

All reasoning funnelled into darkness and the ticking of time faded to mute. There was a quiet melody of exploration that felt paradoxical; despite the rush of the moment, there was a weird peace that I felt within.

All at once it stopped. She took a few steps back looking half dazed and half dangerous.

Then reason hit me. She’s Ms. Danku’s sister. And I am only the chauffeur. This isn’t part of my job.

As I was still battling with reason, she tipped one sleeve and then another of her dress off her shoulders. There she stood, naked, as she’d not bothered to put on any underwear under the maxi dress she’d arrived in. She was a rare sight to behold.

She knelt in front of me, brushing her hand over my member through my boxers first, and then going further to grasp it. Her eyes widened slightly. I was familiar with that. She hurriedly exposed it and gaped.

She looked as though she was psyching herself up for a moment and then she kissed the tip. Just as quickly as she’d kissed it, the head of my phallus disappeared between her lips. She swirled her tongue around it and got to work.

She appeared to be enjoying herself as was I. I guided her to the couch and parted her legs to savour her. Then I pulled back the hood of her clit to make her remember me.

She managed to ask if I had a condom in between gasps. I immediately stood to grab one before she changed her mind.

All set and ready for action, she eased herself slowly onto my girth and gasped. She acclimatized and began to pick up pace. I watched in awe as her beautiful face exhibited ecstasy; the gentle bounce of her firm breasts and hardened nipples turning me on more and more.

Her nails dug into my shoulders as she got more frantic picking up the pace.

Suddenly there was a knock on my door then I heard my name. Ms. Danku was at my door!

Ophelia didn’t seem to mind at all and just kept going, with my dick hitting her core harder and harder. The more she picked up the pace the more Ms. Danku knocked.

And just as we both climaxed, the knocking stopped. Ophelia fell off me spent, and I could barely catch my breath. I looked towards the door, and my breath literally ceased. Ms. Danku was looking right into my eyes from the side window; I’d left the curtain parted. Evelyn looked at me one last time, me with my member still engorged and on show, and walked away.

From then, I knew I was done. There was no doubt about it.

The next morning, Ms. Danku surprised me by being herself as though nothing had happened. She greeted me warmly and asked how my night went. I said very well. She smiled. The day went on as normal with me driving her back to town. I wondered why she didn’t return with her partner as planned.

It’s been torture driving her knowing what she knows yet never asking me anything. But every now and then her hand would linger a bit too long on my arm the few times she ever reached out to touch me.

And more often than I could count, I’d catch her staring at me through the rear view mirror and what I read in her eyes was nothing short of desire…. I guess time will tell.

This is written as told by the person it actually happened to.  But my interest was more on sex/sexual attraction even in times of grief.  How often do people experience it? If they have can they share in the comments?

My First Time: I Met Him In A Trotro