Is the West Just Catching Up? (II) 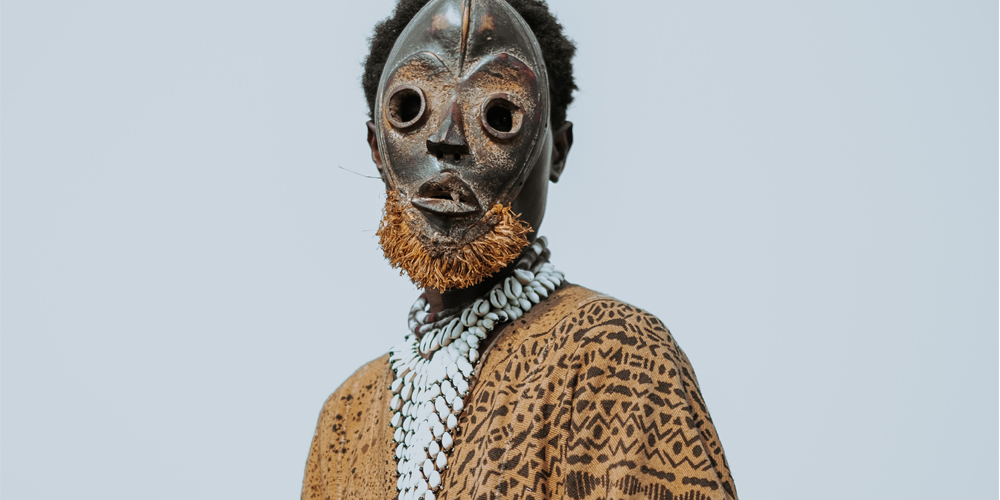 Among the Wodaabe of Niger (a tribe I have encountered much during my research due to their uncommon beauty standards), similar to the Bodi tribe, there is an annual competition for men to take part in. This one is called the Guérewol. It is a ritual that sees young men dressing up to the nines, in ornamentation and traditional face paint. One thing about the Wodaabe – the artwork with patterns and colours of their traditional face and body paint is a sight to behold. When the men “dress up”, they really step out and show out, ok? 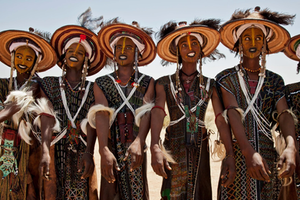 The men gather in lines to dance and sing to none other than the spectating judges – marriageable ladies. In this tribe, you can probably guess that the beauty standards are on men, predominantly. The male beauty standard, is all about having bright eyes and teeth. Often during the Guérewol ceremony the men will roll their eyes and bare their teeth to flaunt their sex appeal and appease the women. The Wodaabe “prize male beauty over female beauty…of course, the women also take a great deal of care in their appearance, but it pales in comparison with the amount of time their menfolk invest in their grooming routines” (Lister, 2019). When a man is attractive among the Wodaabe, they are called “kayeejo naawdo“, meaning ‘hurting man’; in other words they are so beautiful it hurts to look at them.

Now, you might not believe it, but competition at the Guérewol pageant is really fierce. The judges are high-status women. For  example, daughters of past champions or high status people. When a winner is chosen by a woman, they get more than a sash and a crown. It is said that they get to have sex with her – regardless if one of them is already married. In fact the women are so powerful that one can agree to being ‘stolen’ away from her husband and remarried to one of the winners, but there’s no pressure for a wife to leave her husband. But get this, in this society, according to scholars like Loftsdottir (2008), men are interested in marrying women “not because of desire for the women themselves, but to acquire status, to gain respect from other young men”. I’m not saying that the two are synonymous to each other, because this is an entirely different context, but isn’t that the pure definition of what Western men would call a “gold-digger”? My point is that in this society it’s not seen that way. No one is a gold-digger. It’s just that men are putting women on a pedestal.

I remember when I first shared this with my readers, I titled the thread ‘The African Island where women propose and men can’t say no’ (lol). People initially saw that and thought, “what, are men being forced to get married?” No, not quite. But in this society, women really are the hand of the law, at the very top of the pecking order. Traditions of the ‘Bijago’ people (also spelled as Bissagos) is fascinating, especially when discussing this topic of gender-role-fluidity. For some background, the Bijago people originate from off the coast of Guinea-Bissau. The region is also called the ‘Bijago archipelago’, located on the Atlantic Ocean and made up of 88 islands, of which only 23 are inhabited. The population is composed mainly of the Bijago ethnic group. Though they make up just 2.5% of the Guinean population (approximately just 30,000 people) according to Anele (2020), their cultural influence and beliefs are still very strong to this day. Among the Bijagos, “women play a key role in the family economy with their work, and fulfil the cultural task of transmitting the values and rituals of their ethnicity” (Anele, 2020).

A writer named Rukmini Callimachi interviewed a 90-year-old native man from the Bijagos tribe. He had an alternative view to how Western society approaches the role of men and women in relationships. He was particularly appalled at how men are “running after women and not waiting for women to come to them”. The world today is now “upside down” and has become so now that men are proposing to women – such was his belief. For the Bijagos, it’s women who choose their spouses, and men are not permitted to propose. 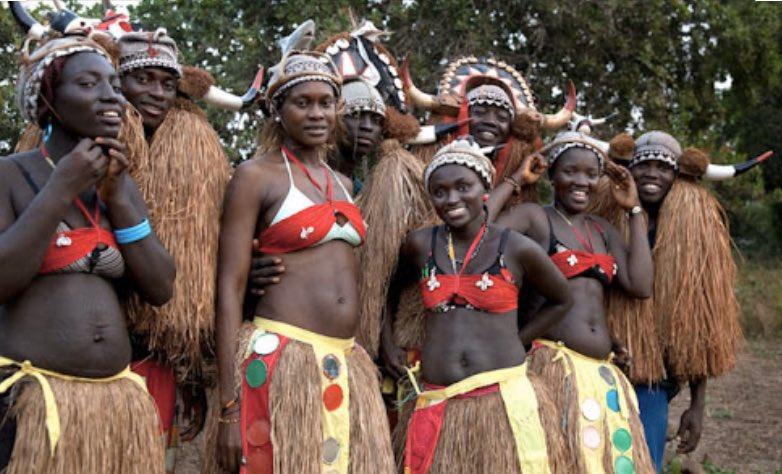 To make their proposal public, a woman must bring a plate of distinctively prepared fish, marinated in red palm oil. Once asked, men are more or less powerless to say no, as declining would bring shame to their families. In some cases, men recall never having any feelings for the women before the proposal, but once they ate the meal, the woman was the most beautiful woman they had ever known and they felt like their soulmate had found them. Now, you don’t have to share this with anyone, but I’m pretty sure there are a couple of women out there who wouldn’t call this a bad deal.

Like some of the other tribes mentioned in this paper, the contortion of gender roles is often birthed from a wider cultural norm or belief. The Bijagos matrilineal beliefs are ingrained from a spiritual perspective, a native religion. In the beginning, the Bijago creator (Nindo) created Orango, the first Island, which was the world. He then formed a man and a woman named Akapakama, similar to the story of Adam and Eve in the Bible. Akapakama had four daughters, who each had several children and a family of their own. The four daughters were named: Orakuma, Ominika, Oraga and Ogubane. They were each bestowed special birthrights. These were:

So since the beginning of time for the Bijagos, women have been entrusted with powers of decision making, hence why they are entitled to do so in matrimony. The general belief is that love comes first into the heart of the woman. Once it’s in the woman, only then, does it jump into the man. Bijago men keep themselves fit and looking healthy, to increase their chances of being chosen as a husband by a woman. The elders believe that divorce rates will stay low if women continue to decide as the choice of a woman is believed to be much more stable.

Once a woman becomes a mother among the Bijagos, she is given the maximum respect and gets immense prestige. The birth of a female is especially significant, given that she will grow to become a very powerful figure in the community, where women rule the economy, the welfare and the law. They are also in charge of gardening, growing rice, processing palm oil, cutting straw for their houses and teaching the kids to do so. While men still collect fish for food, they are treated more like “children”, with minimal responsibilities who can enjoy some extra leisure time. To accept the proposal, the man must eat all the food. He then leaves his family home to join the woman in her hut, and the two are officially married, in the eyes of the community. Everyone’s happy.

In conclusion, gender-role-fluidity is painted to us in the West as something that we’re just pushing towards now; something that Africa is too dated and third-world to even consider. I know the majority of those reading this paper won’t think like that, but it’s a stereotype that can only be crushed with the idea that seeing is believing.

There are some examples that are more extreme, or further away from the looming patriarchy concept that we’re all so used to, but these societal structures exist; they are ancient and some still flourishing. I think the West is only just catching up.

Shirley Sozinha Vinda, is a 26-year-old freelance pan-African writer and content creator, based in London, UK. She is currently working to relaunch her platform called ‘Uncover.com’, which will be a Pan-African community with a blog, forum, video channel and much more. She is also the author of ‘The Dark Tales of Congo DR’, of which hard copies are available, upon request.  She also wrote and hosted the @theresnosignal radio show on Congolese Independence Day in the #NSCONGO61show, and has also appeared on @LaBase radio shows and podcasts.

Sex in our strange world : The Male Beauty Pageant where Female Judges sleep with the winners – Dr. Kate Lister (2019): https://amuse.vice.com/en_us/article/bvg3p4/a-musical-tour-of-ibiza

Image 1 – via Alamy, at https://amuse.vice.com/en_us/article/neg5g8/wodaabe-wife-stealing-sex

I Miss Fucking You