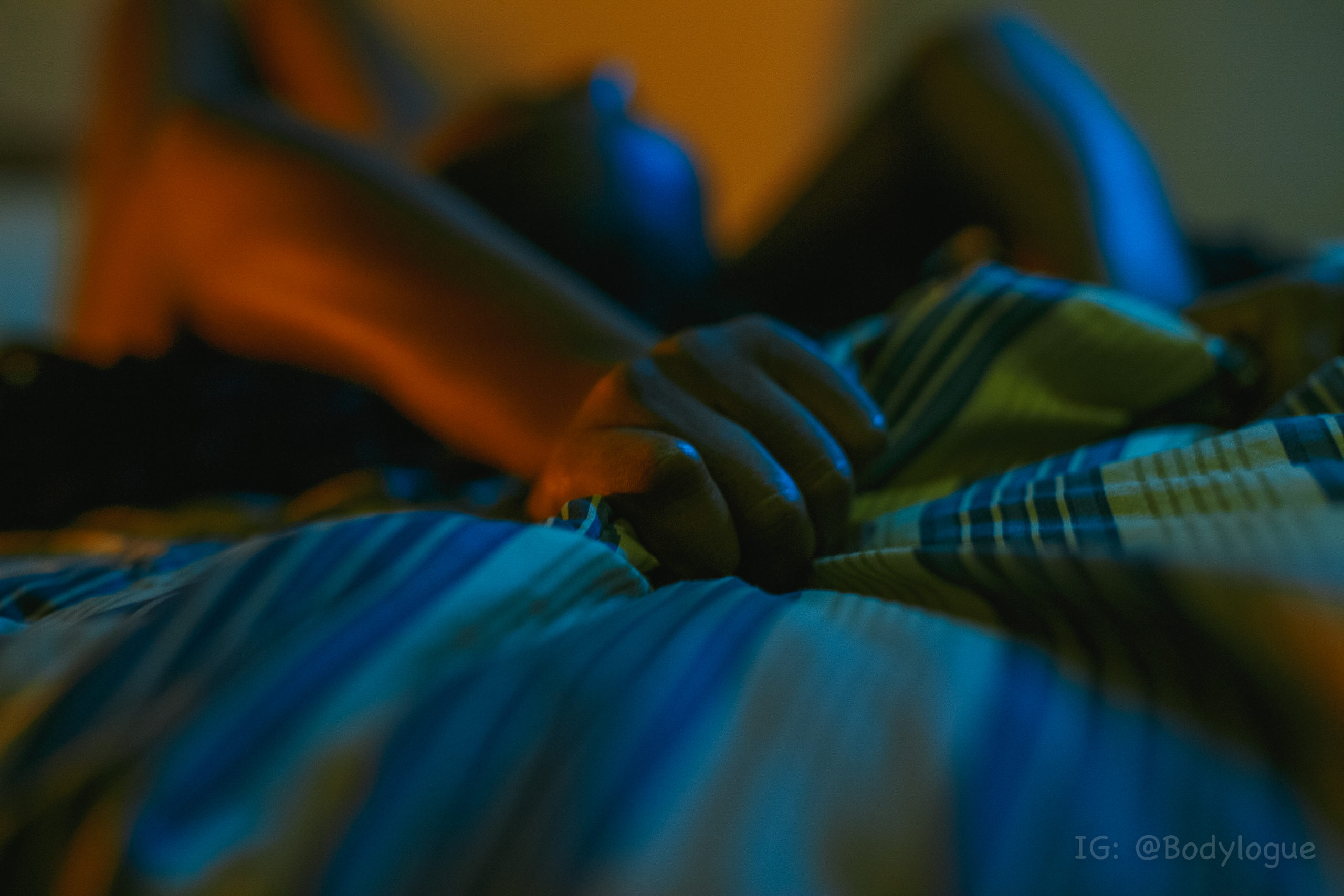 We just got back from the beach. The plan for the day had been to go shopping at Makola, get herb at the beach and come home to rest for a few hours before heading to a games night at my friend’s. Pretty simple itinerary for the day. We should’ve been home by two or three pm, at the very latest.

Instead, we got delayed at the beach because my plug was busy getting himself beaten by a group of muscular men who owed him money. He was so drunk and high that I don’t even think he could register pain. He was slapped hard three times before he reacted to being beaten. When we told them the story later, my friend Kobe said are we sure our plug wasn’t enjoying being beaten? What if he was kinky and this was the only action he’d gotten in a while?

My girlfriend ran from under the shed. I sat down and read until the fight came into my personal space. We still had to wait because he didn’t have hashish and had sent someone to get it for us. Plus, our friend Kobe called earlier and we’d agreed to meet at the beach.

We finally got our hashish but had to wait even more because he’d yet to give us change and wouldn’t sit his drunk ass in one place long enough for us to ask him for the change.

It’s dark now, and we returned home to a power outage. We’ve decided not to go for the game night. We’re tired, there’s no power to charge our phones and we haven’t eaten all day. Kobe stays for a blunt. I use their power bank to charge my phone and let my friend know we won’t be coming. I pass the time by making origami boxes. Babe and Kobe are laughing at my frustration at my inability to get the boxes just right. It’s warm and dark but good company makes one forget discomfort.

Kobe stays longer than they intended to, and we’re glad for the company. Power is restored before they leave.

We decided to go for the game night. Both of us being chronic homebodies, we never go out. I think it’d be good for us to hang out with people other than each other for a change. We swear that we’d leave by midnight. We have a hair appointment tomorrow and babe likes to show up to her clients’ on time. Factor in that we’re already pretty exhausted and the sensible decision is to stay home. We still want to go out though so leaving the party at midnight is the compromise.

After long minutes spent being irritated at drivers cancelling on us, we get a ride on the fourth try. My friend, who we’re going to refer to as Emme from hence, met us at the door and let us in.

My girlfriend is seated behind a curtain in one corner of the room. I can’t see or hear what’s going on but from the lack of conversational sounds, I’m guessing she’s making out with the woman she took with her. Just before she drew the curtain, she ordered me to talk to this other person she thought was feeling me.

There are four guests left at the game night; my girlfriend and I, and the two people with whom we are each talking. The host and her girlfriend (my friend Emme) aren’t in the living room with us. My companion and I are wishing we had a blunt to honour tradition. She’s a chef, I enjoy cooking and so we’re talking about food and the many ways to cook it. For some reason, we’ve been stuck on noodles for a while.

When we got here earlier, everyone was given a cup with a number. If you wanted a drink, it was poured into said cup. The numbers were pertinent to the games. If your number was called, you were up to do whatever was supposed to be done at that moment. It was a good way to include everyone.

While we were trying to get comfortable, I thought I saw my ex arrive. I pointed her out to my girlfriend. In an interesting turn of events, she got seated next to me. So this was me seated with my current lover to my right and my past lover to my left. I know you expect that there was drama, but there really wasn’t. My girlfriend knows I want to fuck my ex, and my ex wants to watch my girlfriend and I fuck. Why wouldn’t we get along?

The games started with Do or Drink. The game works exactly like its name; you did or you drank. That was fun, especially because most of the dares were quite silly. Someone had to do an impersonation of DJ Khaled and post it on their story. I really thought they wouldn’t but they did and boy, were they good at it! I enjoyed watching women being as goofy as they wanted without any fear of judgement. Sometimes, we had to vote on something as random as who we thought disliked giving head the most. The person with the most votes had to do a dare that the group came up with. The dares were plentiful; equal parts silly and risqué.

My dare wasn’t difficult. Honestly. All I had to do was keep quiet and I’d be fine. The dare was to take off an item of clothing every time I cussed during the night. Simple, right? Except, I have a potty mouth. In the space of about ten minutes, I had to take off two things. I took off my glasses and my cap, because I was going to be fucked (not in the literal sense) if I didn’t stretch it out. I had on shorts and a shirt. Beneath those were boxers and a sports bra. Unless I stretched it out by taking off any other thing, I’d soon be standing in just my underwear. I did have to take off three extra items. A pair of socks and my anklet followed. It was at this point that I shut the hell up. The only accessories I had left to prolong stripping off any actual clothes were two rings. I wasn’t ready to be playing games in my underwear.

Speaking of underwear, somewhere during the night, someone was dared to strip below the waist to her underwear. She did, except there was no underwear. All she had on were the shorts she’d taken off. You know what that means right? There was a glorious display of ass and pussy that none of us had been anticipating. What better way to liven up a party than some consensual nudity?

That was one thing I really liked about this party. Everything was consensual. If you got dared to make out with someone and they didn’t consent, we switched to someone who consented, or the dare was changed totally. You also had the choice to ask for your dare to change if you were uncomfortable with it. Consent makes things more fun because no one feels pressured to do anything they don’t want to. This translates into most people allowing themselves to try new things they wouldn’t normally try because they didn’t feel safe.

Somewhere along the way, (not very far along) I became the MC of the event. This was an unlikely development but I welcomed the task. This meant I was exempt from the games. For some reason, whenever someone finished their dare and had to choose someone to do or drink, it never occurred to anyone to choose the MC, even when I announced quite loudly that I was still playing. What you gon do though? Being the law at a game night is fun. The MC’s word was final and I enjoyed making people do ridiculous dares.

The host took back her duties after a while, to the protest of the entire group. Apparently, I’m quite the entertaining MC. Some people told me as they left that they’d text me to be their MC if they hosted a game night. I was no longer the law, which meant I could sit at the kitchen island and finally have a drink. Or so I thought. Emme, the person who invited me made me the designated roller. I spent half my time where I wasn’t the MC, rolling really slim blunts that could go around the house. She sat on a pouffe in front of me with her legs open. Before this party, she’d told me she wanted to fuck me. All the sexual undertones in the room were making me bold, and so I started to massage her clit through her shorts with my big toe.

She let me do it for about a minute. Then she got up abruptly and left, after giving me the kind of look you’d give someone you’d caught in the middle of doing something illegal. In a way, I understood the look. I mean, her partner was barely eight feet away, and according to Emme they’re exclusive. Technically, I was helping her cheat.

I didn’t react to her leaving. I continued to roll my weed and drink. I didn’t expect her to return but she did and this time, she didn’t budge. I didn’t look her way at all. I just continued to touch her with my toe, while my eyes roamed the room for my partner. She’d switched seats. My friend shifted on the pouffe. I could see how turned on she was because her lips soon fell open and her breath was short. I smirked to myself and stopped fucking her with my toe. I mean, she has a girlfriend and they’re exclusive.

The night slowed down considerably because someone’s nose bled. Nope, it’s not because they saw a naked woman. Anime has firmly put this disturbing image of men suffering nosebleeds because they’d seen naked women in my mind. One of the other players introduced a new game; a pair of people had to catch a falling piece of paper between their lips. If they failed to, they had to do a dare from the person who dropped the paper. Tell me you see all the ways this is rigged to fail. Every couple lost. Some had to makeout, I had to give my girl a lap dance and one person had to lick the legs of her partner. This couple were a little too determined to catch the sheet. One person’s forehead drove straight into the other’s nose. We couldn’t keep playing while someone had a nosebleed.

People began to leave soon after this. It was already past three am. Soon, it was left with just a few of us. Some were waiting for rides, others were making connections and some were just too high or drunk to deal with life.

At this time, my friend who’d been on the pouffe earlier was sitting on my girlfriend, and they were getting handsy; babe had her hands on Emme’s butt and my friend had an arm around her neck.

(Part One) I Woke Up In A Pool Of Blood, Again.

On dating, and writing about sex