In Lover of Her Sole, SeriesPublish DateJanuary 12, 2014 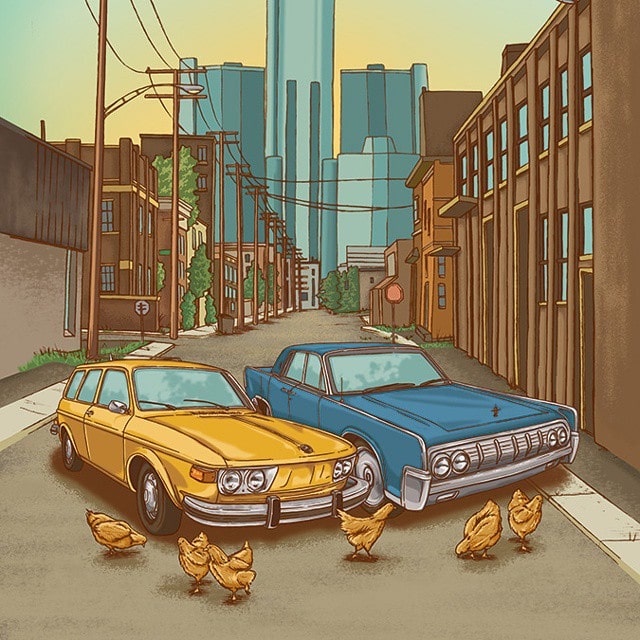 Cait Maloney is an incredibly talented illustrator and artist at Envato Studio. Make sure to read her interview over on the Studio Blog.

Someone was pounding on the door. Ewurade*, why wouldn’t they stop? It was like a thunderstorm shaking a small forest. Why so vicious? Just stop it already!

“Pomaa, we know you are in there. The watchman told us so. Open the door, Pomaa!”

“Oh my God, Pomaa! What happened in here?”

Frema gingerly stepped over shards of broken glass and waded through a river of clothes strewn about on the floor. Pomaa had already retreated to narrowest corner in the room, the one between her bed and the wardrobe. She wanted to be small…ever so small. And she wanted to disappear. And she wanted to curl up inside Femi’s shirt and live in his sleeves forever.

Why had he left his things in her house if he knew he was going to leave her? What was the point in leaving all those fine clothes in her closet? Was it to add to her torment? The kaftan he liked to lounge around in the house in, his blue button down shirts he wore for important meetings, he shoes… Ewurade. He hadn’t even bothered to carry out his shoes before walking out on her! Pomaa rested her head on the cold concrete wall and bit her lip. There were no more tears. She had expelled them all. Now, there only dry heaves – and those hurt.

It was Ayo who spoke the dreadful, accursed words.

“The wedding has been cancelled,” she whispered.

“What? Who says? That’s nonsense!”

Ernestina Agyemang sank into the nearest chair and began to mourn softly. Pomaa shot her an annoyed look. How dare her mother grieve? She was the one with a broken heart, not she! All anyone was going to miss out on was cake and jollof rice. The cake. God, it was magnificent – decorated with pearls made of sugar and dotted with African violets at the crown and the base. Pomaa clutched her chest when the vision of her wedding cake – which would either go uneaten or worse, tossed out altogether -materialized before her eyes. She reached out to touch it, but a sharp pain in her chest caused her to retract her hand. She was dying! She was actually going to die on her wedding day!

“Lucinda,” Pomaa croaked. “I think I’m having a heart attack…”

Ayo began to pace the room, yelping for God to save her friend, praying in tongues. Frema pushed past her, ensnarling her heel in a discarded lace thong and nearly hurtling head first into the bed. Ernestina continued to weep silently in her corner chair. It would have been a comical scene, if not for Pomaa’s face, which was twisted in pain. Lucinda always carried a nurse’s kit for these very reasons. She pulled a bottle of water from her bag and instructed Pomaa to sip.

“You’re not having a heart attack, dear,” she soothed. “You are having a panic attack. Your heart is under extreme pressure, but it is in no danger.”

Ei. Her heart, her heart! Pomaa stared at Lucinda with watery, infantile eyes. So she was not going to die? It certainly felt like it. Seeing the doubt creep over Pomaa’s face, Lucinda averted her gaze and patted her friend’s hand.

“What’s all this nonsense about a cancelled wedding?” Frema hissed, now that she was sure her friend was out of danger.

“Well,” said Ayo in her most impressive detective’s voice, “there is the state of the room, which betrays that something is wrong…”

“…and the text message that we all received last night,” she finished.

Ernestina sat up and furrowed her brow.

“What text message?” she asked. There was a strange quality to her voice. Pomaa had never heard her speak like this before. Could this be anger?

Pomaa slid her weak body off the bed and skulked towards the window. She ran her finger along the louver blades and stared out at the stream of humanity trickling by in the street outside. It all seemed like a horrible dream, what had transpired in the last 18 hours. She told the tale of her break up with as much disinterest as she could muster but when she turned around and saw her three friends, dressed in their white and blue lace finery, she began to wail anew.

Ayo continued to pray in the spirit until Frema tapped her on the lips.

“We need practical solutions now, my dear,” she scolded. “We don’t have time for that.”

Wounded, Ayo went and found a seat next to Pomaa’s mother, whose nostrils had widened by at least a third. Why hadn’t she received a text message?

“I guess it’s because she didn’t have your number,” Ayo replied brightly. “Otherwise you surely would have gotten it. We all did!”

When everyone in the room turned to look at her, Ayo realized the enormous insensitivity of her statement. She shut her lips and played with the cuff of her shirt.

“That’s not it at all,” Frema seethed. “Madame Okoye is a felonious sociopath bitch who gets off on seeing others suffer! That’s why she did this.”

Lucinda’s back stiffened at the harsh pronouncement.

“Please don’t talk about her that way, Frema.”

“And why not? Look at what she’s done to our friend!”

“I’m sure there is a good explanation…”

“Oh, there is!” Frema shot back hotly. “She’s a xenophobic ameba who wants pure bred Yoruba grandchildren! I wouldn’t be surprised if she did the job herself!”

Finally, there was a loud, deep belly laugh, accompanied by the clapping of hands and stamping of feet.

Pomaa wiped her eyes and composed herself.

“No, no. I’m not mad,” she said, gasping for breath. “It’s just that I said the same thing to Femi when he told me why he couldn’t marry me!”

Pomaa stepped away from the window and took the first good look at her room since she had wrecked it the night before. She must have been furious. Had she really broken the padouk framed sitting chair? And all the paintings Femi had made…why were they not in their frames? They were pulled down, covered in shattered glass – uncomely – like the ruined face of a boy suffering severe acne. This would not do.

“Come on girls,” Pomaa commanded. “I need you all to help me get ready.”

Frema clapped her hands in glee. ?h??!! They were going to show this Madame Okoye where the power truly lies! She threw open the wardrobe and surveyed its contents.

“What do you want to wear to the church, Agyapomaa? I think you should wear red! Today your name is ‘Ntokwawura’, because we are coming to fight!”

Pomaa gripped Frema’s hand and offered her a weak smile.

“I’m not going to the church. I just want you guys to help me clean this place up a bit.”

“But – the fight? I think you should go and fight!”

Ayo whispered wistfully from her corner, twirling her Peruvian strands on her finger.

“Fight for your man. Yes…how romantic!”

“That’s nonsense,” Lucinda grunted. “Besides, no one is going to be there! How silly would she look? Showing up to a fight with no one there – will she fight the priest?”

The trio continued to argue until Pomaa clapped her hands over the noise.

“Hei! I just want to clean up this room! Ayo, make yourself useful and pick those trousers from the…”

Pomaa paused and sniffed the air. What was that overpowering smell? Anaïs Anaïs – applied too liberally.

Madame Okoye. That bitch was actually standing at her bedroom door.

Three is definitely not a crowd (Part 1)

Pubic Hair: To wax or not to wax…