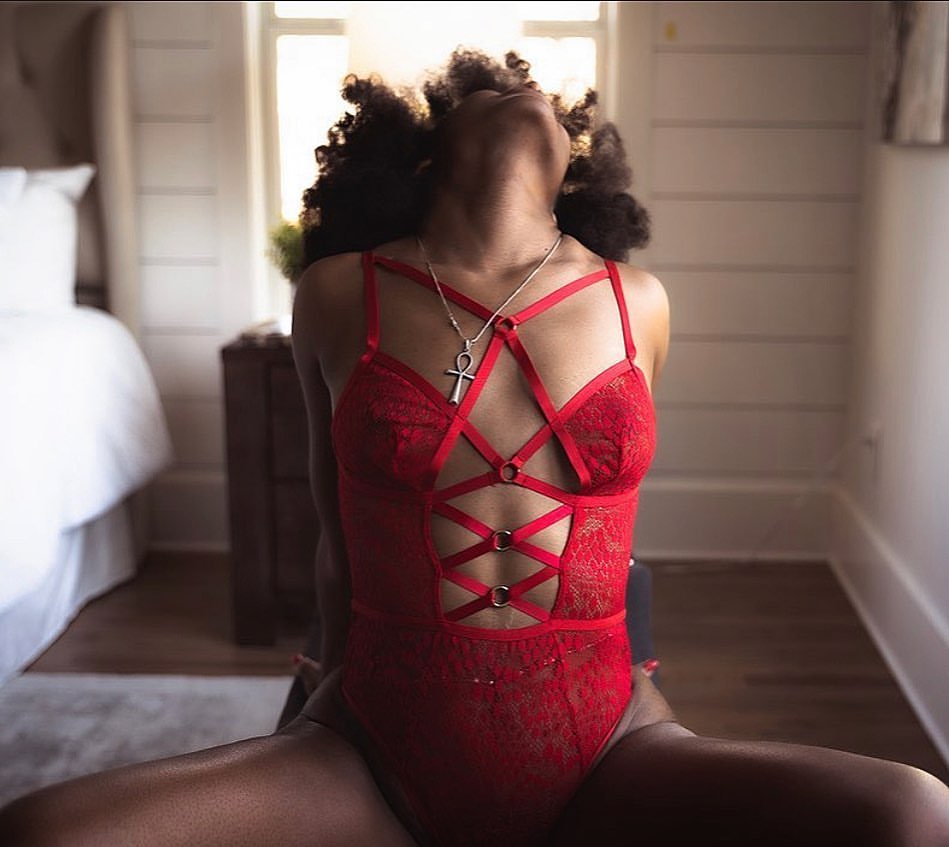 If this world made sense, I’d probably always walk around without a shirt. I’ve known this since I was old enough to take off my own clothes. I enjoy the feel of my skin against my skin, of external elements touching me. Clothes are a hampering force to this, and I wear them because doing otherwise would have me admitted to a psych ward. Another thing I am extremely averse to is brassières.

I hate bras. I always have. Unless I’m going to be involved in some activity where unrestrained breasts are going to be uncomfortable, I’m not wearing a bra for shit. One of the standing fights between my mother and me is over my refusal to wear bras, even when I’m going out. The reasons for her angst have varied over the years. When I was a tween with developing breasts, her beef was that not wearing them would cause my breasts to fall before they even got the chance to be perky. No man wanted a woman with flat breasts. As soon as my chest swelled even the tiniest bit, she bought me bras. I wore them once and decided nah, this ain’t my shit. I don’t need perky breasts for anything, especially considering that with age, they’re going to droop anyway.

Now, her angst is fueled by the belief that I’m drawing too much male attention to my chest. She’s quite peeved because you’d go out without a brassiere and your nipples will just be showing through your shirt. Men are looking at you. If someone gets aroused and rapes you, can you blame them? I don’t understand her because wasn’t she the same person who wanted my breasts to be perky for men? Doesn’t male attention need to be drawn to my chest for this to happen? Ah well.

A popular discussion some time ago in one of my WhatsApp groups was the male chest. It was sexual, in that some people were trying to make me understand that a woman could provoke a man to rape her by the way she dressed. One of my counter questions was if a man raping a woman because she was scantily dressed is justifiable, would it be justifiable if I raped a man because I was turned on by the sight of hard pectorals and a happy trail that led to barely restrained genitals? Because many men love to walk about in nothing but their boxers, their ding-dongs swaying like some ancient bell on an ugly Gothic cathedral. Of course, the discussion ended how most discussions with men on male rape ended; the men encouraged the women to rape them because who said they don’t like it. That’s a discussion for another day though. Nipples are why we’re here today.

Like my mother, one of the things many women worry about is their nipples showing through their clothing. In very cold rooms, you may see a few women glancing at their chests to ensure their nipples aren’t hard peaks poking through their clothes. Half the time when a woman doesn’t want to wear a bra, it isn’t because she’s worried about her breasts getting in the way of her daily activities. It’s because she’s concerned about her nipples showing through her dress.

In stark contrast, men would show you their nipples even when you beg them to cover up. Some men have zero qualms about walking from their house to the corner store in nothing but their underwear, or a pair of shorts. If you’re lucky, they’d wear a singlet. Why can men do this and women cannot? I’ve asked this question many times.

There have been attempts at answers, but they didn’t quite make sense. One of them can be surmised from the above paragraphs, the argument being that women’s breasts turn men on. This makes no sense because some women are turned on by men’s bodies too. If we have to ensure we’re “modest” for their sake, shouldn’t there be reciprocity? Shouldn’t they have to do the same for us? Or aren’t we ready to have this conversation? Why should we go out of our way to try and not turn men on in otherwise non-sexual settings, when they don’t give two shits whether or not their near nudity is problematic for us? It makes me feel like men have every right to be sexual and sensual and women only can be when they are permitted to.

Except for two classes, I attended boarding school my entire life. I noticed something, especially because I did it myself. A lot of us took off our bras before we took off our clothes. Even when a person was going to strip totally, they’d take off their bra, before taking off their shirt. It’s something I still do today. Some women enjoy brassières, but many of us wouldn’t wear a bra if it were entirely up to us. Brassières offer support and other services, but they’re more for the benefit of men than they are for women, because how dare you be in a board meeting with a room full of men and have your nipples trying to break free from your shirt?

Sometimes, I’m tempted to give in to the belief that the need to cover up women’s chests is purely sexual, and has nothing to do with the other dynamics on which society runs. My seven-year-old self reminds me quite firmly though that it goes beyond that. I remember quite vividly being scolded by my cousin and his friends because I took off my shirt one very hot afternoon as we all sat under this tree in my aunt’s house. My chest was flat and unimpressive, and this didn’t bother me, even though some of my seniors from school had already started developing breasts. In fact, I enjoyed my lack of boobs because it meant that I could remove my shirt and sling it over my shoulder on a hot day such as this one.

My cousin and his friends found this behaviour very irregular and were quite vocal about it. They told me that my shirt needed to stay on. I pointed out that not one of them had a shirt on. Why were they allowed to be shirtless but I wasn’t, even though we were all suffering the sweltering heat? You’re a girl, they said. Girls don’t walk about shirtless. You’re exposing your breasts. I was confused because all I had were nipples on a flat expanse of chest.

Not that I agree with the faulty assertion that women need to cover their nipples because men would be aroused, but let’s suppose for a fleeting moment that this nonsense made sense. Unless a man is a paedophile, why are the bare nipples of a seven-year-old problematic? It’s not that women need to be modest, it’s that society – a large portion of the society I am referring to being cis-gendered men – feels the need to tell women what to do with their bodies. There’s this almost pathological need to be able to control and regulate women’s bodies and how they are presented in various settings. A woman who’s covered up at the beach or in a club is seen as prudish, but let her walk on the street one hot afternoon in her tiny shorts and tank top and see the eyes that will be burning the anger of the gods into her skin.

It used to be that a woman would take out her breast and feed her bawling baby, regardless of the environment in which she was. It may not be one of the things that you’d readily notice, but when was the last time you saw this? It’s because women’s breasts have been overly sexualised. Society is obsessed with women’s breasts, and not in a healthy way. A woman cannot perform the simple biological act of feeding her baby because she’s afraid some unruly man might pass a senseless comment, or stare too openly at her exposed flesh.

Here are a few examples of times when Instagram decided that the female nipple is dangerous for public viewing. A post gets flagged or taken down if a woman’s nipples are exposed. Nudity isn’t considered to have taken place until her nipples are seen. So I can flaunt my ass and thighs all I want but a fully covered woman with nip exposure is considered nude. Following this criterion, a man with exposed nipples should be considered nude too. Yet, Instagram is one big bare chested male activity, with the algorithm flagging zero posts of men with exposed nipples as nude.

Doesn’t it bother you that an algorithm is taught to specifically hunt pictures of women’s nipples, and not men’s? In many cases where posts are flagged, it’s not even sexual or a thirst trap. Breast cancer survivors share the stories of their struggle with the disease; lactating mothers want to tell others the joy feeding another human with their breasts brings them; trans people want to share the stories of their bodies and their quest to feel at home in vessels that feel foreign to them. There are millions of people who need to know these stories to know they aren’t alone. There are humans all around the planet who need these stories for a myriad of reasons. I am very pained that there’s someone in some corner struggling with their identity of self and how their breasts fit into this madness and yet Instagram would deem a post addressing this very issue as haram and take it down because there were nipples shown.

For someone like me who is about 90% certain that her breasts are superfluous and need to be removed, stories around breasts and dealing with them in relation to one’s identity of self are quite important. Considering that they’re a large contributing factor to the body dysphoria I experience sometimes, I rarely mention my breasts in a sexual context. I talk about my breasts as a part of me that isn’t part of me.

Whenever I talk about getting top surgery, the straight men in my life immediately protest, talking about “but why would you cut your breasts away? You should keep them.” As if they live in this body with me. As if when I stand naked in front of the mirror and ask my body questions, they hear the answers with me.

Breasts aren’t a sexual appendage by default, and the fact that it’s mostly what society sees is alarming. This narrative needs to change. It won’t, however, till we first acknowledge that women’s breasts don’t exist because of men, and how women choose to package and present their breasts, is no one’s business, but theirs.

Guest Contributor Corey Gilkes: On Cheating and the Other Wo(man)