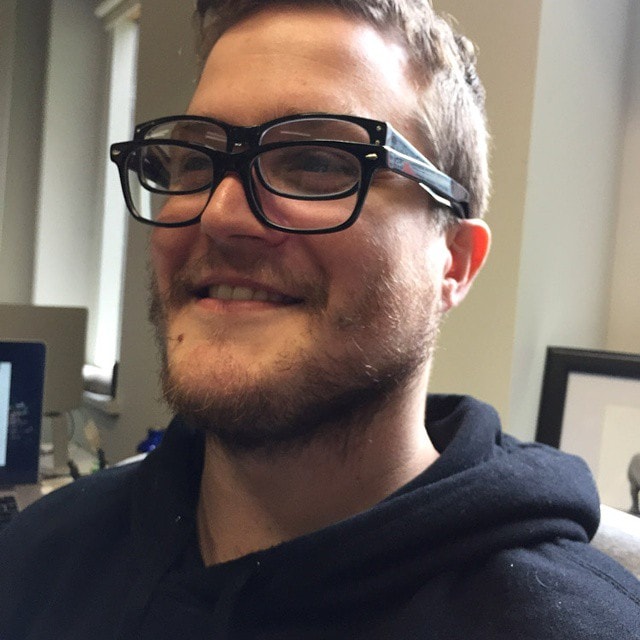 The glasses help Dan to code.

“I’d rather have no head than have a bad one.”
I couldn’t believe my ears. Who was this man? In all my men dating history no man had ever uttered these words to me.
“I love head. Don’t get me wrong. But because I do, I know what a good one feels like and I’d rather a woman tell me straight up if she doesn’t like giving head. A half-ass head is worse than blue balls.”
Note to self: be honest with him now or never…
“I don’t like giving head. In fact make that I abhor giving head. It appalls me. For the longest time, I thought that was what defined me as lesbian, but then I realized that I disliked muff-munching almost equally. Not the same, but close.”
“Aah I see. Well that’s good to know. I love pleasuring my partner. I get off seeing them come. After they come, I can pleasure myself until I make myself come. So long as they keep eye contact and suck on my nipples every so often, I’m set!”
“You mean there’ll be no strongly suggested, subtly-guided head-bending, no pun intended, in this relationship?”
“No baby. I can do it all by myself. Well, not really. I mean not give myself head that is.”
We collapsed into each other laughing.
“My goal is to make you feel pleasure and if I achieve that, I’m aight.” He held me by the shoulders, out at arm’s length and stared into my eyes.
Note to self: this one might be a keeper…maybe…
“No one’s ever told me I was the main event. Never. Before you I mean.” I smiled sheepishly at him.
“Yeah? Well get used to it. That’s the way it’s going to be from now on. Whenever we make love, my aim is to make you feel wanted, alive, pleasured. I need you to tell me if I fail ok?” He held my head between his palms so I could look at him. I nodded.

I was delirious. Who was this man and why did I all of a sudden move from women to men after practically swearing off them for 6 years. I told him I was queer from day one literally. Also told him I was relatively a free spirit and couldn’t be pinned down by one person. Once they attempted to do that I bolted without leaving notes. I then disappeared and played passive aggressive until the trail grew cold and they gave up the chase. I ALSO told him I’d been diagnosed with Bipolar disorder right around the same time I was developing a bisexual identity. That is before I came to claim the term Queer instead. Was there a correlation? He wanted to know. I’m not entirely sure. I answered, because I didn’t really know if my relationship patterns were in sync with my brain’s erratic firings. I told the man all this about me and he still lay on the hotel bed loving him some Asantewa. I didn’t know where the gods picked this one from. I just knew I was going to be offering sacrifices to them as often as I could. I owed them one.
And to think if I’d never gotten on that bus back from Busua Beach Resort that Sunday this chance meeting would have never happened.
**********

I sat with my friend Nana as we settled in for the four-hour journey putting our snacks and water bottles in the back pockets behind the seats. We were fussing over who got the window seat.
“Hey! Where are you ladies from? I heard an American accent,” he flashed a smile our way as Nana and I were trying to put our travel bags away.
We paused and looked up at his tall frame in front of us. I hadn’t really paid much attention to him as we shuffled along the aisle trying to pick our seats. I wanted the window seat so I was on the lookout for a row where both seats were open.
“I’m from California and my friend here is from New York,” I said as we settled into our seats, I-pods primed to go.
“Ah! I’m also from New York,” he smiled again.
Beautiful smile, I thought to myself.
He reached his long arms across and shook first Nana ’s, then mine.
“I’m James.”
“Nana.” “Asantewa.”
“Pleasure to meet you both!”

He faced our seats, kneeling on his. After a while, he packed up his travel comforts, his I-pad and his scarf, and moved to the seat right across the aisle from ours. Shoot! He was closer to Nana now. I could barely make out the gist of the conversation taking place. I finally gave up trying to join in and returned to my book brooding silently.
He was cute. What I could see of his face at least. His face was chiseled with high cheek bones and
sunken cheeks that dropped down into a hard jawline with a goatee finishing the drop down. His minor mustache was clean and precise. I’d steal a glance each time he asked a question that I’d managed to hear. He was curled up in the seat, trying to contain his 6’4’’ frame in the row.
I wasn’t looking for any romantic entanglements. But I’d do him, I thought, but quickly dismissed the thought because I was sure Nana was closer to his age and definitely more suited to his tastes seeing as they shared a common land. Plus I’d had two recent painful experiences with those young ones. All they were was trouble.
I finished my book, Etornam’s Story, by a good friend of mine. As I smiled at the romance that had blossomed through the pages of the book, I thought about the stranger I had just met.
Ah well, it wouldn’t do to think of something that wouldn’t go anywhere. After a while the conversation between Nana and him dwindled, and I quizzed her on what she had learned about our new friend.
“Do you like him?” She wanted to know after my stream of questions died down.
“He’s ok.” I lied. Plus I’m not looking for anything right now, remember?” I grimaced.
“Right! Ok.”
“Do you like him?” It was my turn to ask the question, dreading the answer. She shrugged, but gave no answer.
I knew she was seeing someone but she had mentioned it wasn’t going so great.

We settled into a comfortable silence and concentrated on our individual projects. After about another half hour James engaged us in conversation again. This time I propped myself on the back of my seat so I could join in. Ghana was proving to be a challenge for him; he was missing 24/7 electricity, running water, internet, and customer service. He missed his family but was hoping to go back in a month for his birthday. He was farming lettuce and tomatoes in the mountains. Nana and I promised to visit the farm sometime. When we were done talking this time, we exchanged numbers, Twitter handles, FB names, emails. We retreated into our separate silences again convinced that with all these ways to contact each other, there was no way we’d lose track of each other.
At the rest stop halfway through the trip, I stole a glance at him as he languidly unfolded himself from the corner and proceeded to leisurely strut down the steps to go get a snack. When Nana and I returned from our break, he was already folded up neatly in his corner.
The rest of the trip went uneventfully until we arrived at our station. I had no romantic inclination towards him, I convinced myself as we said our goodbyes. He belonged to Nana as far as I was concerned. Nana and I parted ways some thirty minutes later, and we left the wonderful world of vacation behind.
Of course you can imagine my own surprise when the promised visit to the farm two weeks later yielded more than a handful of tomatoes and a head of lettuce, pun intended.

Are You A Rosebud Or A Rose-In-Bloom? asks Guest Contributor Kalya

‘An afternoon with a body anatomy connoisseur’ by guest contributor Enyonyoozi

Dating Below Your Class