In Lover of Her Sole, SeriesPublish DateJanuary 23, 2014 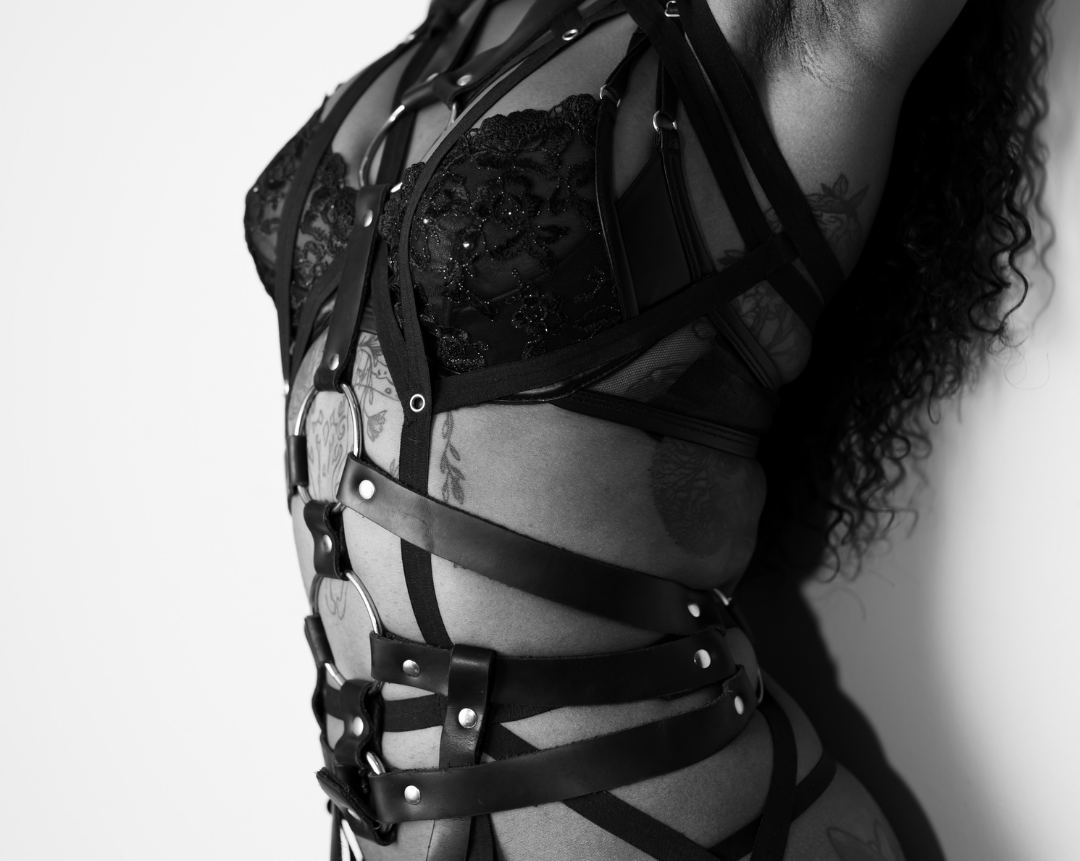 You couldn’t miss her, standing there amid the crowd dressed in a sequined bustier and bright, white jeans and an even brighter smile. The crowd seemed to part as Pomaa made her way towards Frema’s statuesque frame at the back of the arrival hall at Kotoka International Airport.

“Thank you for coming to get me,” Pomaa said, tugging her luggage behind her. Frema smiled.

“You sounded so frantic on the phone. How could I not!” She looked at the single leather suitcase in Pomaa’s grasp. “Is this all your luggage?”

“Yes. Everything else is being shipped. It’ll be arriving at my house in a few days.”

Frema clapped her hands joyfully and let out a yelp, drawing the attention of porters and other bystanders. A man in freshly pressed polyester trousers kept his eyes firmly fixed on her breasts, which were jiggling just above the hem of her strapless top. His focus was not lost on Pomaa, who took Frema by the elbow and steered her out of the arrival hall.

“Why are you all dressed anyway?” Pomaa asked. “You look like a proper ashawo*”

“I look like a proper Ashanti aristocrat,” Frema corrected. “And I’m dressed like this because we’re going out!”   She had a determined look in her eyes.  “I’ve already booked us a hotel. Give me your bag. Y?n ko!*”

Frema made a beeline for her car. Pomaa groaned. This was the risk she took whenever she relied on Frema to accompany her anywhere: there was always the chance that their progress would be impeded by some unplanned side venture. Frema was unpredictable. It was one of the things Pomaa loved most about her, but it was a maddening habit.

Still, she knew there was no point in arguing with her longtime friend. Frema had driven all the way from Kumasi to Accra just so she wouldn’t have to fly the last leg of the trip back home. The thought of another hour and a half in an airplane had terrified her so completely that she’d called Frema from Lagos and implored her to pick her up. If she could do that for her, Pomaa could indulge her for a few hours. Frema was chatting excitedly about her plans.

“I’ve got us a room at Fiesta Royale. The honeymoon suite at the top floor!” She was giggling. “I can’t wait to see their faces when we arrive together. I’m sure they will assume we are up to total naughtiness. Two Ghana girls with only a big suitcase? Hei! Come and see! When we enter, I’ll hold you by the waist, ok?”

Pomaa hesitated to ask her next question, but she found the courage to do so anyway.

“And what are we doing tonight, Frema?”

“We are going to binge drink and chase small boys at Aphro!” Frema exclaimed, clapping her hands resolutely. She turned her gaze on Pomaa, who had leaned her head against the glass of the passenger door. “But first we have to get you some food. Fufu, I think. Look how lean you’ve become!”

“Frema, please keep your eyes on the road and your hands on the wheel!”

Frema swerved to avoid hitting a street hawker. The poor boy scampered towards the median of the road, dropping his dog chains and calendars in a bid to preserve his life. He shouted obscenities in the direction of their speeding Honda. Frema waved her hand and tossed a fifty cedi bill out of the window in apology.

“Ah. Frema. Is he supposed to now dodge traffic to get this money?”

Pomaa chuckled to herself. Frema took her position as an ‘Ashanti aristocrat’ very seriously; literally throwing money at a problem and hoping it will fix itself.

Soon enough they were pulling up in front of the silvery façade of the grand hotel. It’s blue banner flags snapped in the brisk evening air, urging the women to hurry inside.

“Frema, it looks like there will be rain,” Pomaa mused.

“Oh, nonsense. There is a drought! And are you sugar? You won’t melt if you get wet.”

Frema bent over and adjusted her bustier. The mesmerizing fluffing of her breasts drew a watchman, who asked if the ladies needed any assistance? Any assistance at all – he was very happy to oblige. Pomaa chuckled inwardly. This was what she had missed about Ghanaian men. They were less overt about their intentions, but no less intentional than their Nigerian counterparts. Pomaa assured him they could manage the bag on their own. A hotel porter soon arrived and shooed the watchman away. He would look after the ladies.

“Pomaa…your waist! Give me your waist,” Frema hissed.

Pomaa rolled her eyes and joined her hip to her friends. Why did Frema insist on courting trouble in this way? Still, she had to giggle when she noted the confused and concerned look on the faces of the hotel reception as they took the keys to the honeymoon suite. She could feel their eyes boring into their backs. When Frema smacked her on the ass, they erupted into loud, shocked whispers and clicking tongues.

“These small girls these days, eh?”

Frema swung the door of the suite open and let Pomaa go in first. It was immaculate, elegant…all the things a honeymoon suite should be! A bowl of ripe strawberries sat on the center table, flanked by two champagne glasses. An ice bucket proudly bore the weight of a bottle of Bramon sauvignon blanc, begging to be poured. Frema obeyed its beckon and poured two glasses.

“Here’s to your triumphant return to Ghana!” she said, handing Pomaa glass. Her smile soon turned to a look of displeasure. Pomaa’s eyes were welling with tears. “Hei, hei, hei! We will have none of that, you hear? Tonight we are only happy!”

“No, you don’t understand. I am SO happy. Thank you Frema. This is…this is just fantastic.”

Frema waved her hand and took a gulp of her drink.

“Please. This is nothing. You think you are the only one with planning skills, eh? You wait and see what I do on my own wedding night. I’ll invite you to come and see yourself!”

“Ah. How will your husband react to me being in the room?”

“But what if he’s also of the aristocracy and decides to invite his boys as well?” Pomaa teased.

The pair erupted in a fit of giggles. Pomaa didn’t know if it was the drink, the fatigue or both, but she realized the talk of weddings that had not yet been did not bother her at all. She was actually looking forward to going out.

“Good. Good!” Frema said, clapping. “I got you this going out dress. It’s based on your old measurements though. But don’t worry, with a few safety pins and some celotape we can adjust it for your body. We really have to fatten you up, Pomaa. You have the body of a model…or a house girl. I haven’t decided which. Either way, it’s not…”

Pomaa sucked her teeth and made her way to the bathroom to take a hot shower. God, she was so happy not to be in the air. If she was going to die while travelling, it would be much better to be on the road, where she could have some control. How could her family identify her body if it fell 50,000 feet from the sky? Ah! And what was this need to fatten her up? Pomaa ran her hands over her knew body, made smaller by grief and a disinterest in eating. Her breasts were smaller, yes, but her belly was more taught and the thighs which previously rubbed together incessantly had garnered some independence from one another. She liked her new physique. She would keep it.

When she emerged from the shower there was a tray waiting on the dining room table.

“Frema, did you really order me fufu?”

Frema was watching  Guru do the Alkayida dance on the TV, muttering about getting the steps right. She ordered Pomaa to eat up so they could leave.

“You want me to go to the club smelling like fufu?”

“Use a spoon!” Frema snapped. “Why are you troubling me? Can’t you see I’m trying to learn this dance?”

Twenty minutes later, Pomaa was fed, clipped into her black sequined dress and shod in her favorite pair of Sam Edelman pumps. They were black satin, open toe 3 inch heels with spikes and diamonds coursing and cascading around the heel. When she had curled Pomaa’s locked into a goddess updo, Frema nodded her approval.

Why modern African women choose to be single

2 comments On LOHS: Aliens in Accra